LeBron, to by the record of Abdul-Jabbar in his season 20 in the NBA

Twenty years in the elite of the NBA. 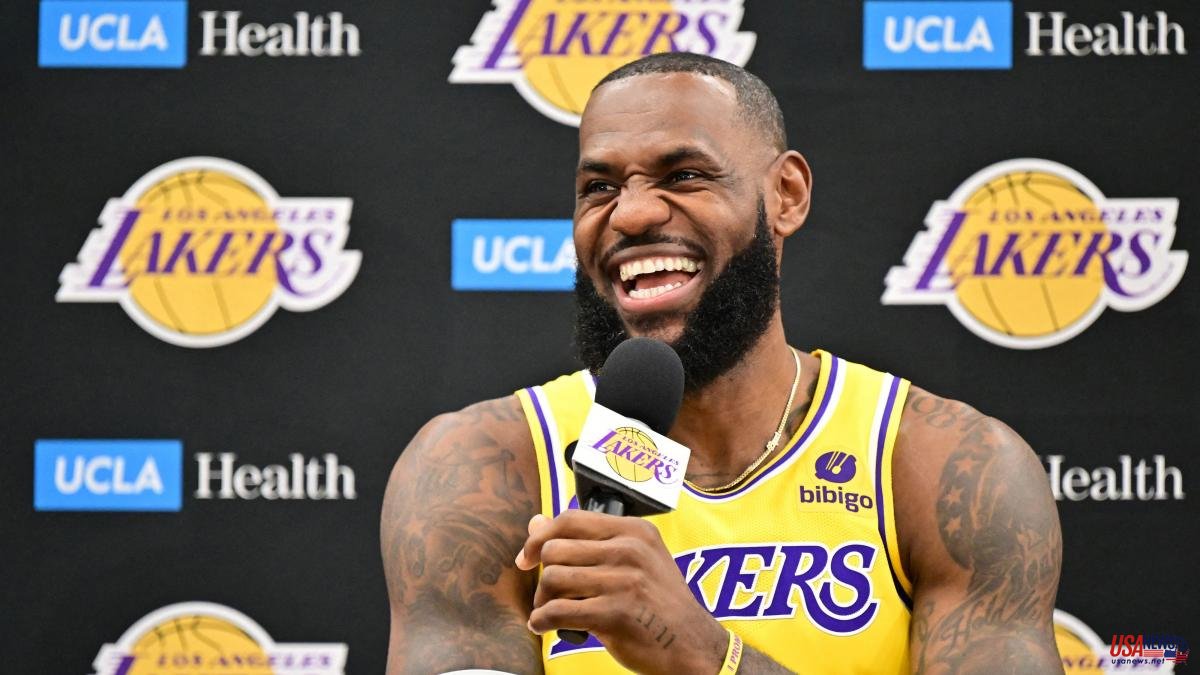 Twenty years in the elite of the NBA. That is one of the brightest aspects of the legacy of LeBron James, who begins his twentieth season with a new Los Angeles Lakers project and with the close possibility of surpassing Kareem Abdul-Jabbar's historical record for points in the league.

"Being here and knowing that I'm about to probably break the most wanted record in the NBA, something that people said could possibly never be achieved, it's super overwhelming for me and super cool," he said Monday at a press conference for the NBA Media Day of the Lakers (official open day for the media for the new NBA season)

"Any time my name is mentioned among the greats, like Wilt Chamberlain, Michael Jordan, Kareem Abdul-Jabbar or others, it's super overwhelming," he added.

Abdul-Jabbar, with 38,387 points in the regular season, is the top scorer in NBA history while LeBron appears in second place with 37,062 points, so this season he could surpass the center's mark.

Last year, LeBron became the leading scorer in NBA history if you add the points scored in the regular season with those from the playoff games, but the official NBA record does not take into account the scores from the playoffs .

Regardless of the record, LeBron, who will turn 38 in December, will once again be the leader of some Lakers who will try to forget the resounding failure of last year, in which they opted for a very veteran team and united in the same squad LeBron James, Anthony Davis, Russell Westbrook, Carmelo Anthony, Dwight Howard and Rajon Rondo.

Considered one of the great contenders for the ring in the preseason, the Lakers crashed in one of the biggest failures in NBA memory and were left out of the playoffs and "play-in" by finishing the regular season in the eleventh Western Conference position (33-49).

On this occasion, LeBron will be accompanied by Davis and Westbrook in a Lakers with news both on the bench (Darvin Ham has replaced Frank Vogel as coach) and on the track (players such as Patrick Beverley, the Mexican Juan Toscano-Anderson, Dennis Schroeder or Lonnie Walker).

Asked why the purple and gold should improve, LeBron was clear: "Defense." "Obviously you have to be able to put the ball in the rim, of course, and in our league there are great teams that can do that, but the teams that can defend and stop attacks when they need to are simply the most successful in our league. ", plot.

After a year in which injuries only allowed him to play 56 games out of 82 in the regular season, LeBron stressed that one of his goals for the new season is "to be available" for his team.

"Obviously, there are some injuries that you can't control ... But as one of the leaders of this team, being available is the most important thing," he said.

Finally, LeBron, who in the summer renewed with the Lakers for two years and 97.1 million dollars, expressed his confidence that Davis has "an extraordinary season" and that Westbrook can enjoy "a great year."