Laia Sanz does not win for scares in this Dakar 2023 rally, the second in which she participates in cars. 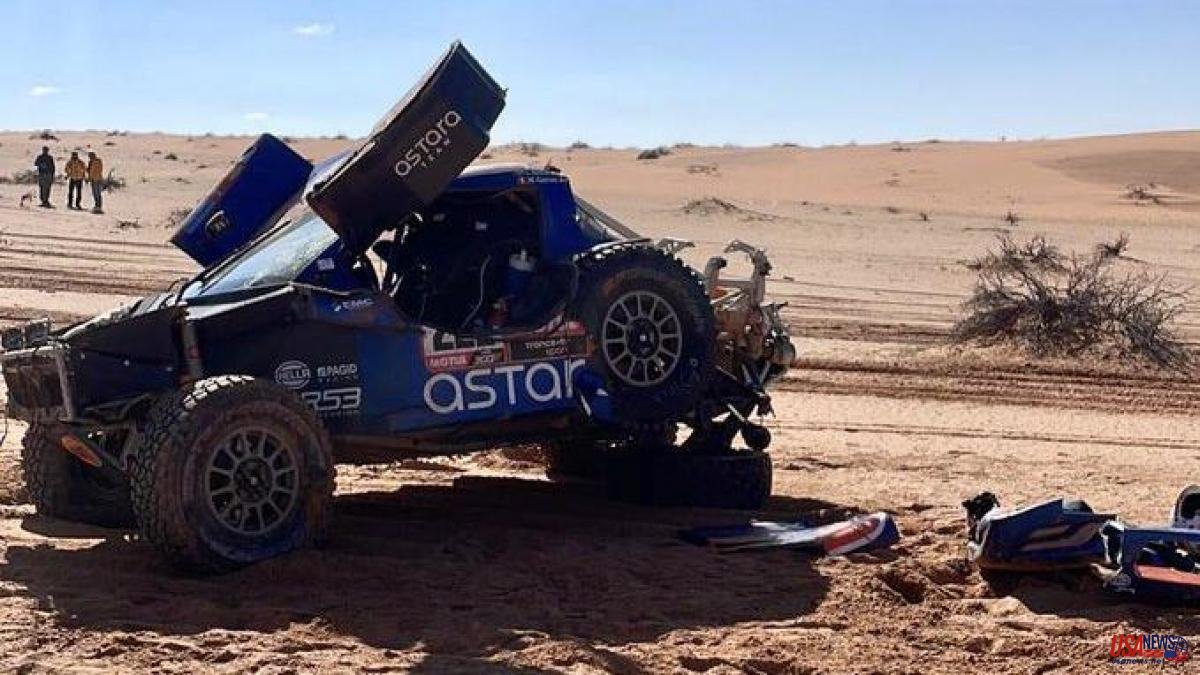 Laia Sanz does not win for scares in this Dakar 2023 rally, the second in which she participates in cars. The Catalan pilot, who lived through an odyssey in the second stage due to a wheel failure, has now suffered a huge scare that could compromise her participation: a spectacular rollover in stage 5 - won by Al Attiyah -, in which, according to her calculations, he could have been spinning for 100 meters, he left fear in his body and the dented car. She escaped unharmed along with her co-driver Maurizio Gerini and was able to resume the route.

The accident occurred in the early stages of stage 5, around Ha'il, shortly after the timed section had started, at kilometer 28, around 10:35 local time. Inexplicably, the rollover surprised him on a straight line on flat ground, when "suddenly" -said Sanz- they have been seen spinning.

"We don't really know what happened... We rolled, but there's nothing, as you can see. I don't understand it. We rolled a lot (upside down). It's a shame because we were going well. We didn't do anything weird. No I know if we have undercut...", Laia Sanz explained shortly after the accident to the organization's cameraman.

Sanz told his team that in the accident they could have been spinning over a stretch of 100 meters, as can be seen from the marks on the ground. Sanz and his Italian co-driver counted up to five impact marks from the buggy on the ground, spread over a space of about 100 meters between the first mark and the point where the car was stopped, visibly crushed and damaged.

The Corbera de Llobregat driver was able to minimally repair the vehicle to be able to resume the race, thanks to the intervention of the fourth car of the Astara team, driven by Sergio Vallejo, and the assistance truck of the Madrid structure.

In total, Sanz lost about four hours in detention. At the first checkpoint (km 37), the Catalan accumulated a delay of 4h8m compared to the leader of the day, and at the way-point at km 282 it was already 5 hours and 25 minutes late.

Stage 5 was a difficult day for the majority of Spaniards in contention. The best classified after Carlos Sainz was Gerard Farrés with his Can-Am, 30th, 52m38s behind Al Attiyah.

The little T4s were the ones that best adapted to the sand and dunes. The daring rookie Pau Navarro signed an outstanding 43rd position, losing only 1h05m compared to the leader, and his father, Santi Navarro, was 49th. Among them, Cristina Gutiérrez (T3) was 47th. Isidre Esteve, who had been climbing the positions, was 53rd, and Carlos Checa, who was the best Spaniard "in the rest of the world" had problems and finished 90th, 2 hours and 12 minutes behind the Qatari.