Lagarde defends the rate hike to 2% and warns: "We are not done"

He said it four or five times at the press conference, with stubborn insistence: "We have a long way to go. 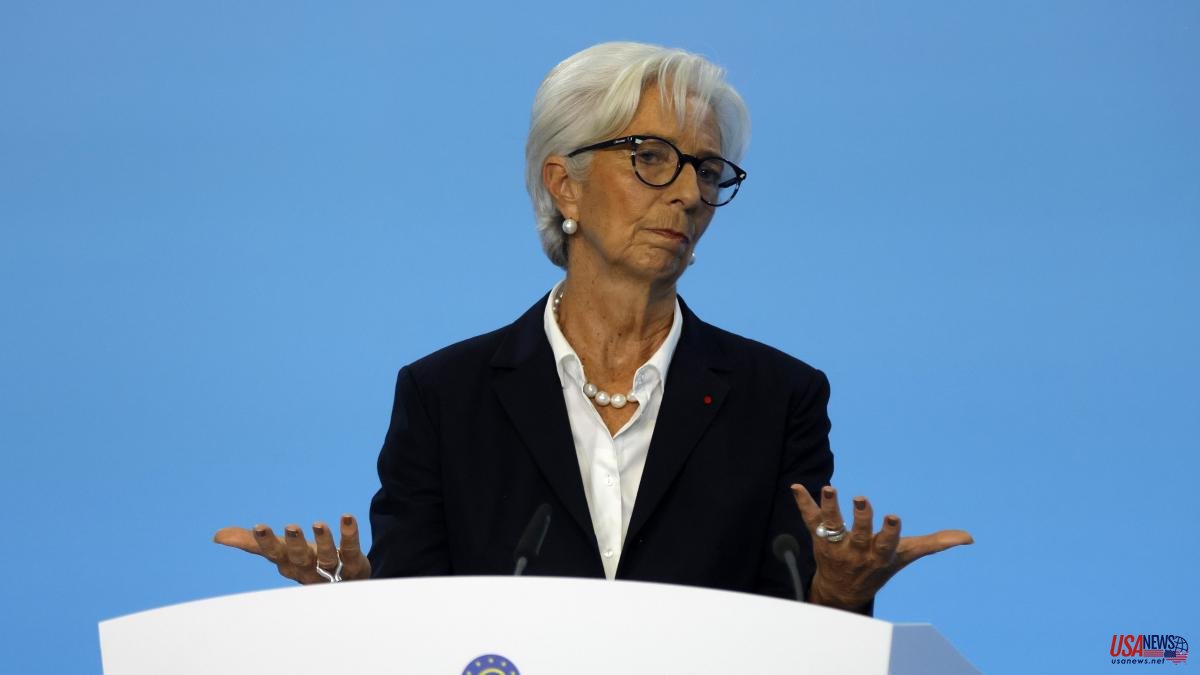 He said it four or five times at the press conference, with stubborn insistence: "We have a long way to go." Christine Lagarde, president of the European Central Bank (ECB), defended her position against everyone on Thursday, both those who believe that she has gone too far in raising interest rates and those who believe that the entity falls short and it is not aggressive enough in the fight against inflation.

The institution that governs the monetary policy of the eurozone, whose main mandate is to ensure price stability, raised rates by 75 points (0.75%), to 2%. This is the third consecutive rise in as many meetings of the governing council in which rates have gone from 0% to 2% in just three months, since last July. The blame for this express tightening – a real shock plan, whichever way you look at it – lies with the evolution of prices in the eurozone, in an upward spiral for half a year and currently at 9.9%, according to the latest September data available.

If Lagarde left anyone in doubt, it was not because of her lack of insistence on her message. He once said: "We have to do what we have to do." And another: "Our job is price stability." And another one: “We are not finished”. The president of the ECB assured that there would be more increases immediately, without specifying the amount or the times in which it will have to be done. "It will depend on the data and we will go from meeting to meeting," she assured.

The ECB's governing council raised all reference rates by 75 points, including the deposit rate, which has stood at 1.5%, and that of the marginal credit facility – the one paid by banks to obtain financing at a day of the ECB–, and that is now at 2.25%. It is, as the entity explained in a statement, to reduce support for demand and provide protection against the risk of a persistent upward shift in inflation expectations. In other words, what is sought is what the monetary policy manual says: rates are raised to curb credit, which is at the origin of many consumer or investment operations.

Now, the impact of the rate hike on growth in the eurozone or unemployment is in the background. It is not the duty of the ECB, as Lagarde unhesitatingly dropped. "Everyone has to do their job," he pointed out when the criticism of some political leaders about the consequences of monetary policy on growth was mentioned.

In its statement, the ECB explained that "the governing council has adopted this decision and plans to continue increasing interest rates to ensure the timely return of inflation to its medium-term target of 2%". The bank believes that this target is far from being achieved as “inflation remains excessively high and will remain above target for an extended period”. In the press conference after the council, Lagarde recalled that “the process of normalizing monetary policy continues”, he added.

The ECB's decision did not surprise the markets, but its effort to moderate the message and recover an accommodative tone did draw attention: the new rises will depend on the data and some reflections by Lagarde pointed to an attempt to reconcile her duty as banker and a more political statement. The euro accused him and lost parity with the dollar after the increases of the previous days. For its part, the absence of a specific reduction in the ECB balance sheet – which could increase tensions in the debt market – benefited the risk premiums of countries such as Italy and Spain, with falls of 30 and 20 points, respectively .

Apart from the rate hike, the ECB also made other far-reaching decisions, such as modifying the conditions of the third series of long-term financing operations. It is about the banks having less capacity and incentives to lend as they have been doing until now. For this reason, the ECB has now modified the conditions so that they return the money it has lent them as soon as possible.

The ECB is going to charge them more by adjusting the interest rates applicable to these liquidity operations as of November 23 and offers banks additional dates for voluntary early repayments of these operations. Years ago, the ECB lent money to banks at very low, even negative, interest rates so that they could quickly lend to the real economy, to businesses and households, and thus boost economic growth, especially in the acute phase of the pandemic. But now that the ECB raises interest rates and the deposit rate is no longer negative, the interest rate that banks pay for them is lower than what they receive when depositing excess reserves with the ECB.

In view of the unexpected and extraordinary increase in inflation, it is necessary to recalibrate these liquidity operations. It is one more step that the bank takes, with the same objective: to tie inflation short.