La Diada, from the Statute to independence 1977

It takes to the streets to commemorate a defeat that represented the abolition of the constitutions of the Principality of Catalonia in 1714. 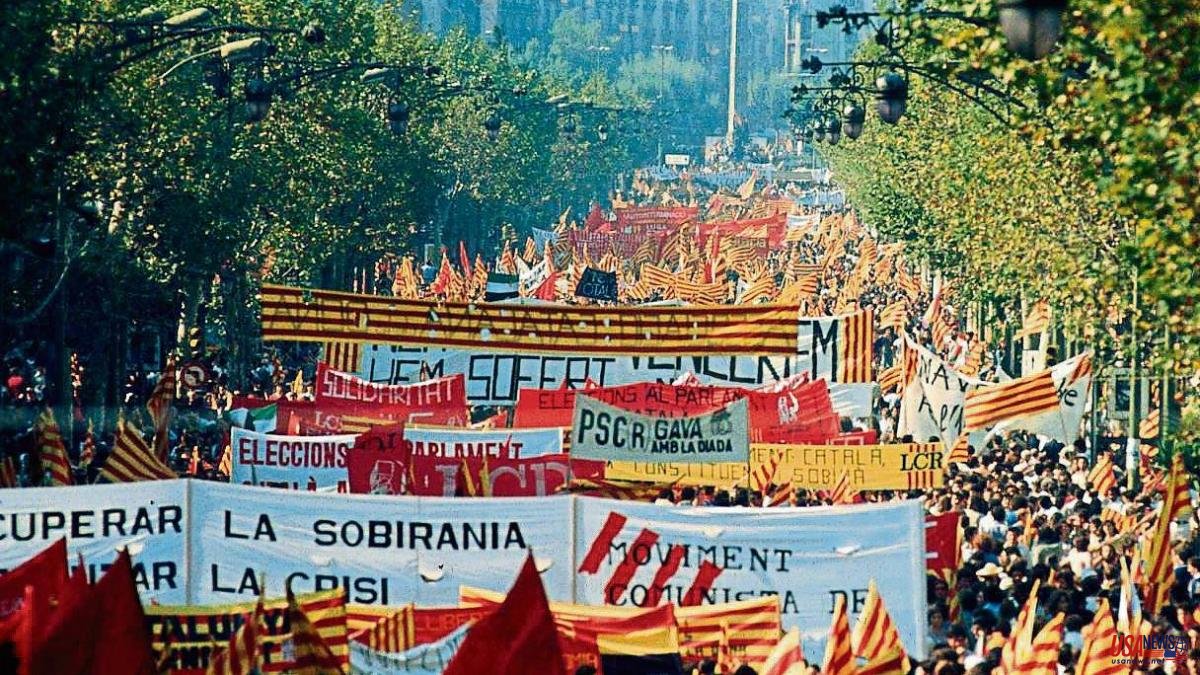 It takes to the streets to commemorate a defeat that represented the abolition of the constitutions of the Principality of Catalonia in 1714. A defeat that serves to underline the will to be of a people. The mark of the siege of Barcelona and other towns by the troops of Felipe V remained in the collective memory. With the first political Catalanism, during the last third of the 19th century, the Onze de Setembre became a symbol and an excuse to raise the demands for self-government within a State that arrives late and poorly at modernity.

After Franco's death, at a time of great social and political upheaval, the civil governor, Sánchez-Terán, in agreement with Minister Martín Villa, gave the go-ahead for the celebration of the 1976 Diada, but prevented the acts from taking place. were made in Barcelona. This first tolerated Onze de Setembre was a kind of prologue to what was to come and took place in Sant Boi, the city where Rafael Casanova is buried, the conseller en cap who embodies the resistance of the Catalan Austrian side during the War of Succession. Under the organization of the Assemblea de Catalunya, a unitary platform of opposition to the dictatorship, that Saturday afternoon more than 30,000 people connected with history and the future, without incident. In Plaça de Catalunya de Sant Boi, those gathered applauded the speeches by Miquel Roca, Octavi Saltor and Jordi Carbonell, who released a phrase that has since been much repeated: “That prudence is not ens faci traitors”. The debate was between rupture or reform. The singing of Els segadors, under the baton of Oriol Martorell, closed the act.

The Diada that marks the turning point of the transition in Catalonia is that of the following year, 1977. That Sunday, one million two hundred thousand people demonstrated on Passeig de Gràcia, according to data from the municipal police. It had been almost three months since the first democratic elections, in which the Catalans had voted mostly for socialists and communists, while Suárez had won in Spain as a whole. President Tarradellas returned shortly after, on October 23. The success of the 1977 Diada showed that Catalonia was the most powerful engine of democratic change in the State, and that its wishes had to be listened to, synthesized in two frequently repeated slogans: “Libertat, amnistia i Estatut d'Autonomia” and “Volem l'Estatut”.

At the head of the demonstration were all the leaders of the moment, from Gregorio López Raimundo to Jordi Pujol, passing through Joan Reventós, Anton Cañellas, Josep Benet, Heribert Barrera, Carles Sentís, Antoni Gutiérrez Díaz, Miquel Roca, Marta Mata, Ramon Trias Fargas, Carlos Güell, Paco Candel, Macià Alavedra and Pere Portabella, among others. For a few hours, unity – one of the most ethereal myths of Catalanism – was possible. In a sea of ​​flags (there were few stars then), parents, children and grandparents, people of all types and conditions, demonstrated from five o'clock in the afternoon as never before. The queue of the demonstration reached the point of dispersion, at the end of Ronda de Sant Pere, at half past nine at night.

The first law approved by the Parliament that emerged from the first regional laws was, in 1980, the one that established September 11 as a national holiday. Parallel to the construction of Pujol's self-government, there is a certain stagnation of the Diada, which loses participation and is affected by the divorce between the parties and the new movements such as Crida a la Solidaritat. The date also highlights the splits in the minority independence parties of that time, which made the Fossar de les Moreres their place of reference.

Starting in the 1990s, with the refounding of the ERC and the Olympic environment, the Onze de Setembre demonstrations took on a more vindictive tone. The offerings of the parties to the monument to Rafael Casanova end up degenerating into a show of whistles and rants.

The approval of the new Statute of 2006, promoted by President Maragall, opens a new time. The ruling of the TC of 2010, which cuts and empties the Statute, outrages a large social majority, which chooses to embrace the ideal of an independent Catalonia. On the Diada of 2012, a demonstration called by the ANC takes place under the slogan 'Catalunya, nou Estat d'Europa', which brings together a million and a half people. The event exceeds the milestone of 1977 and exceeds all expectations. The Catalan flags have become estelades and the international media highlight the news. There is talk of “the revolution of the somriures”. On the 20th, Rajoy's refusal to negotiate a possible fiscal pact with Mas gives more wings to the procés.

The Diada of 2013, with the Via Catalana that crosses the entire country with many people holding hands, consists of a great performance to draw the attention of Madrid and the world. Every Onze de Setembre, the pro-independence entities, ANC and Òmnium, try to surpass themselves in originality and projection, as if the procés consisted of making each demonstration a test of effort to legitimize themselves by filling the streets before reaching Ítaca. That of 2014 is to make a V between Diagonal and Gran Via, and that of 2015 is a concentration that fills 5.2 kilometers of Meridiana. The tone is identical each Diada until we reach 2017, the prelude to the general rehearsal of a peaceful revolt that, as we know, ends with the application of 155. Since 2018, and leaving covid aside, the Onze de Setembre demonstrations are a story waiting to be rewritten.

The manifestation of Passeig de Gràcia exceeded one million participants