Kings League: the clubs, the Draft, how it works and when the competition starts

Some of the most powerful clubs in the world wanted to implement the Super League to try to engage more public and, according to their theory, save football. 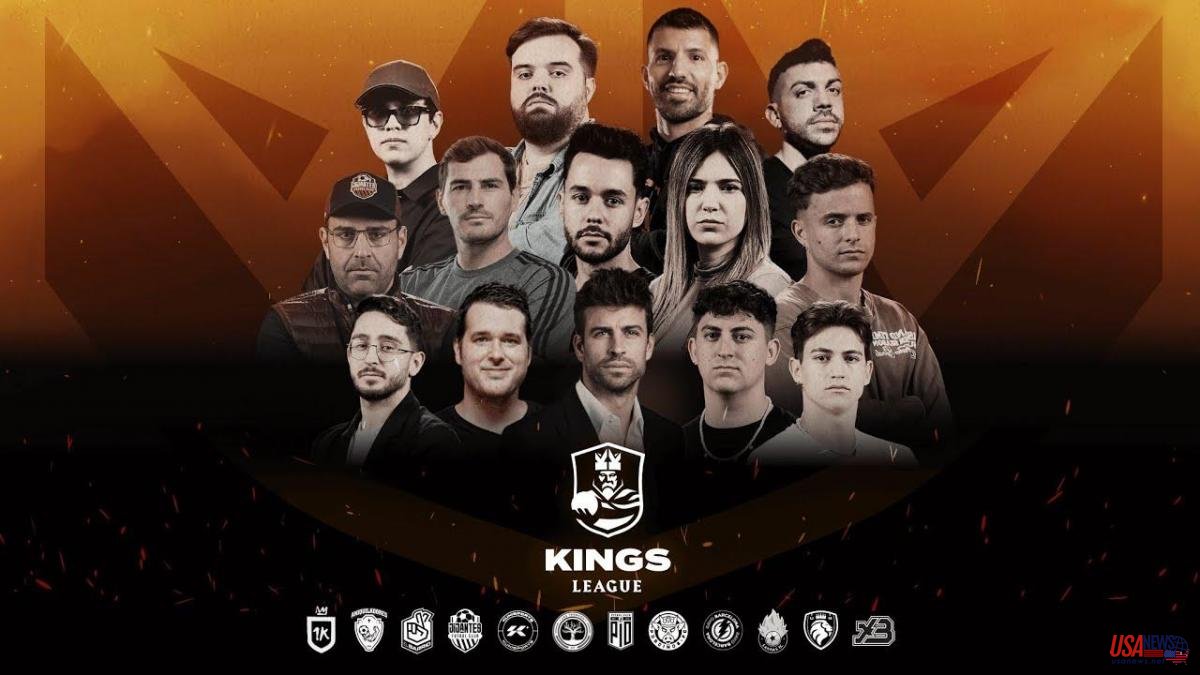 Some of the most powerful clubs in the world wanted to implement the Super League to try to engage more public and, according to their theory, save football. Florentino Pérez himself, president of Real Madrid and promoter of this format that has come to nothing, came to ensure that the youngest were no longer interested in the competition.

Ibai Llanos, the most famous content creator in Spain, has once again joined forces with Gerard Piqué, who acts as Javier Tebas of Soccer-7, to show that this statement is false. To do this, they are preparing an interesting football format that will start on Twitch. It's the Kings League.

It is a Soccer-7 league, with 12 teams and that will have two splits -one in winter and one in summer- of 11 days each. After the regular phase, the play-offs for the title will start between the first eight classifieds.

The six games of each day will all be played on the same day: Sunday. The opening day will be on January 1.

All matches will be played one behind the other, will have two 20-minute halves - for a total of 40 minutes of match - and will be played on a fully approved artificial turf pitch. It will be seen entirely on Twitch.

The Kings League teams are chaired by content creators and other celebrities:

Each team is made up of twelve players: 10 chosen through the draft and two guests, who are chosen by the presidents. These are usually well-known players already retired or in the last stage of their career. Of the latter, one will play the entire season and the other may rotate. In addition, there are also trainers.

The Kings League already has some rules in place that can be found at this link. These rules had previously been put to a vote on social media. These are:

To these rules must be added the new secret weapons. They are letters that the public has decided and give certain advantages to the presidents:

On the other hand, each match will be directed by two referees: one on the field of play and another in the VAR room. Each team may request a VAR review once per match.

The competition presided over by Thebes still does not have the teams closed. The great bulk of the squad is missing: ten players. All of them will come out of the Draft that will be held this Tuesday, January 27 at 8:00 p.m., which will be broadcast on Twitch.

In this process, very common in American leagues, the presidents of each team must choose their players based on the observations they have made and the needs they have. In total, there are 200 players to choose from. All those who do not have a team will be left out of the competition.

The first president to choose will be selected by lottery. Then, the order will be altered so that the first ones do not have too much advantage over the last ones. Each round will consist of 20 seconds to choose.

In the coming seasons, as in the NBA, the first clubs to choose teams will be those that have reaped the worst results, so they will have priority to select the highest quality players that are available.

In this tournament it will be possible to make additions. As it happens in soccer, there will be two windows to be able to make transfers: every time one of the splits ends.

However, no transfers can be made. If any club wants to make an addition, they will have to make a player or draft round trade.

The ten players that make up the teams must be available for the matches. It is not mandatory that they train, but they can do so if the president deems it appropriate. If so, they must have availability to do so.

All players receive a remuneration from the Kings League, which is the same for all. Instead, players 11 and 12 of each team earn what they have agreed with their presidents. Player 12, if deemed appropriate, does not need to be available for all matches and can rotate.