The artist Kehinde Wiley is the new star of MOCO in Barcelona with the permission of its stellar cast of creators: Andy Warhol, Jean-Michel Basquiat, Keith Haring, Kaws and, above all, Banksy, the masked muralist. 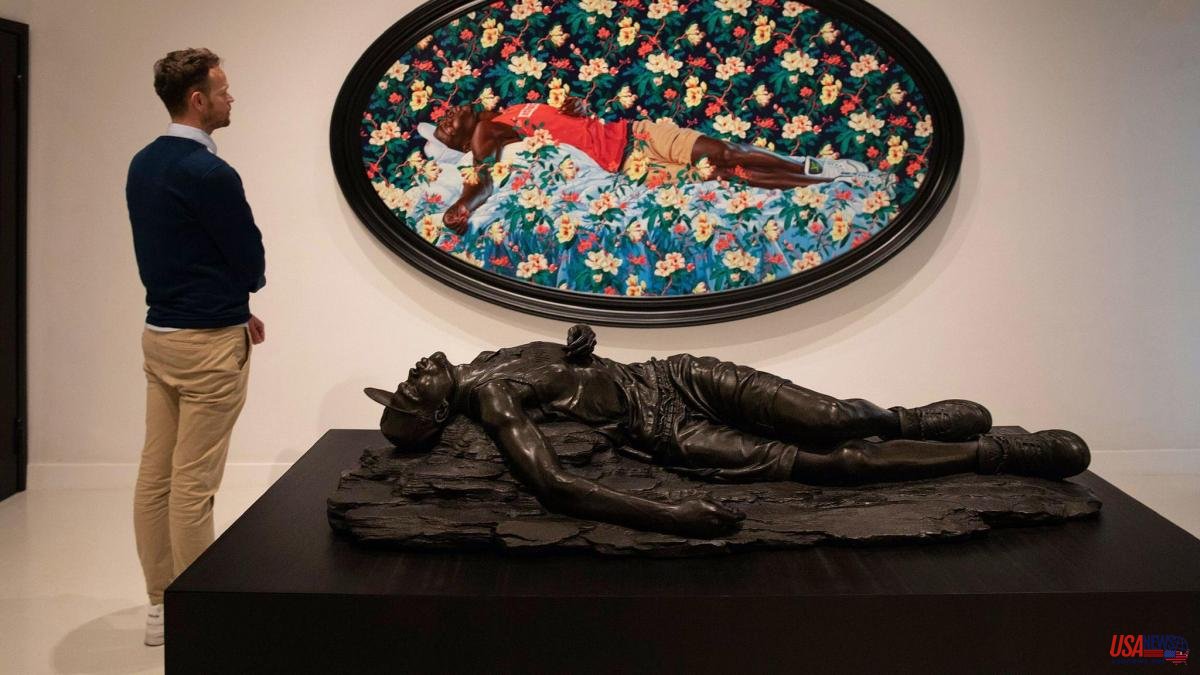 The artist Kehinde Wiley is the new star of MOCO in Barcelona with the permission of its stellar cast of creators: Andy Warhol, Jean-Michel Basquiat, Keith Haring, Kaws and, above all, Banksy, the masked muralist. From now on, the museum on Montcada street exhibits two pieces by the Afro-American painter (and now also sculptor) who has become one of the great references in contemporary art in recent years.

Wiley is known for being Barack Obama's camera portraitist and for reinterpreting works by the great classics of painting (Velázquez, Rembrandt...) always with Afro-American models that he finds on the street and with impressive floral backgrounds that he also incorporates. to his own clothing.

The pieces that close the visit to Moco are a sculpture and a large-format, oval-shaped painting where a sleeping, exhausted or perhaps dead young man rests surrounded by a bed of flowers. He is a contemporary recumbent Christ in a baseball cap, basketball shoes and a red tank top with the slogan Just do it. He lies on a sky-blue bedspread and is surrounded by flowers in a edgy, cheesy nod to the classic Disney aesthetic and the recumbent Snow White.

The piece is called Sleep (dream) and it is resounding in its size and in its lyricism. Beside him, a version sculpted in bronze of the same model and with an almost identical title (Sleep. Mamadou Gueye), dialogues with the painting and its tones. Wiley's sculptural work is recent and draws parallel lines with painting.

A few months ago, Kim and Lionel Longchies, the promoters of the successful museum, explained to this newspaper that they had acquired three pieces by the influential American artist and that Barcelona was a candidate to host them, just like the original headquarters in Amsterdam, or perhaps a third museum in London, which has not yet seen the light.

Two of the three pieces have landed in the Ville de Barcelona. The third, another sculpture but of a large size, has not yet been destined, although it could well be one of the star pieces of the Barcelona museum when it receives the pertinent permits from the City Council, which are still being negotiated.

"Both Lionel and I are committed and focused on showing more art by black artists and featuring women. We believe that representation is important," Kim Logchies explains to this newspaper by telephone from Amsterdam. In a second phase after the opening of the first museum, the couple of collectors have taken an interest in street artists.

Some of them follow in the footsteps of Banksy and complete it: Os Gemeos, Stik, the French muralist and filmmaker JR, the Iranian brothers Icy

The two pieces by Wiley, located on the second floor, are the gift that the Barcelona museum has given itself for having celebrated its first anniversary in Barcelona. In that time, after the summer, El Moco has also opened an art store with a limited series of its main artists.

The space itself is already quite an achievement because it's conceived in the metaverse by digital artist SixNFive. Transferring the imaginary world to the real one, both with the pink color that identifies the museum, cost its own. In the showcases, pieces by Kaws, Jeff Koons and one of the new sensations in street art, Yinka Ilori, famous for his colorful interventions in buildings and basketball courts.

In just a few short years, Wiley's work has ceased to have affordable prices. Many of her works exceed half a million euros and her auction record stands at 616,000 for a large-format canvas.

If to date, Wiley had honored Velázquez, Titian or Ingres, superb portrait painters, or Jacques-Louis David with historical canvases such as the famous Napoleon crossing the Alps, the two pieces on display in Barcelona take us back to Mantegna's marble sculptures and his famous painting Lamentation over the Dead Christ (1475-78) a superb lesson in human (and at the same time doubly divine) anatomy.