Katz, the Gatsby of painting

Alex Katz is the Gatsby of painting in which color is a party. 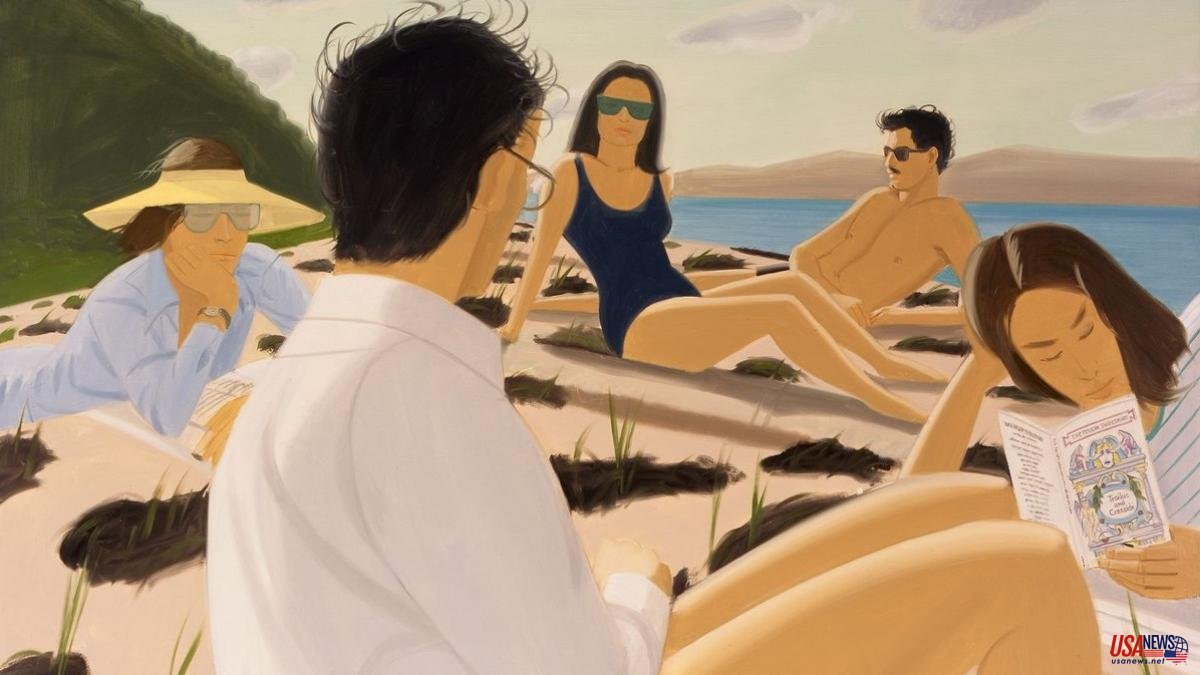 Alex Katz is the Gatsby of painting in which color is a party. It does not matter if the celebration is a room in society, the landscapes in the open air and from the window where the light and the birds that are not seen can be heard in the background or if it is hosted by an invisible house of mirrors in which the identity is fragmented in echoes among which to decipher the enigma of the self. In each and every one of these areas of the forty paintings of the first retrospective in Spain, this New Yorker of pop is a spectator within the history that happens on a Times Square scale and from which, at the same time, he absents himself to observe and tell us that happiness is the fiction of an instant.

Fiction is expressed by Katz (New York, 1927) through the unlimited fullness of color and the cultural construction of the face that results from combining the aesthetic appearance of the mask with the real condition of his friends to create a theatricality of the self, and the concept existential of island beings. Characters reminiscent of Fitzgerald but also of Truman Capote, of Hopper's scenarios or of Eric Rohmer's films with the prosaic nature of their dry daily scenes, without antecedents or hidden narration, inhabited by lonely women and men and idealized as stereotypes of a iconographic beauty, and sometimes absorbed in the pleasure of melancholy, representative of a class bohemian poetics magnified by the publicity of success and desire.

The still life-like countenances with forceful close-up color of a synaesthetic psychic state in Ted Berrigan and The Light, in the wonderful celluloid women of mystery and fashion Nicole, Black Hat, Blue Umbrella, the introspective serenity in blue profile of Ada and the brilliance of Big Red Smile from which a contagious red smile escapes, transmit that moment in which each one of them is the precise place and time of a motionless emotion.

The monumental dream of the chromatic stroke that magnifies its ephemeral figures cut out on a flat background and that also look at us from the front or from the side. In their eyes and on their lips is the focus of the secret of that tranche de vie that traps them. A subtle introspective lyricism that contrasts with the beauty of the elusive chromatic reverberations of the Maine groves, such as Appel Blossoms and Orange and Black, in which the chromatic temperature is musically poetic.

Watteau. Matisse. Maneth. Van Gogh. Georgia O'Keeffe. Rothko. Abstract expressionism and pop at full volume are the essence of scenic composition, of the advertising impact in its breadth of this artist gifted to think pencil drawing with subtle line gestures but whose enjoyment is to define it in oil on canvas, where the color emphasis builds the space and is the absolute expression of the pictorial fact. In Katz, not only is the decisive matter of the image the chromatic volume, he also attracts from his paintings the perception that his painting expands from the inside out, and invites us to join the party in which the nature of color has a face , and an emotional mystery to solve.