The president of the ERC, Oriol Junqueras, has refused from Madrid to set a date for independence after yesterday the Catalan National Assembly (ANC) asked in a meeting with the president of the Generalitat, Pere Aragonès, to declare it in the second half of 2023, coinciding with the Spanish presidency of the Council of the European Union. 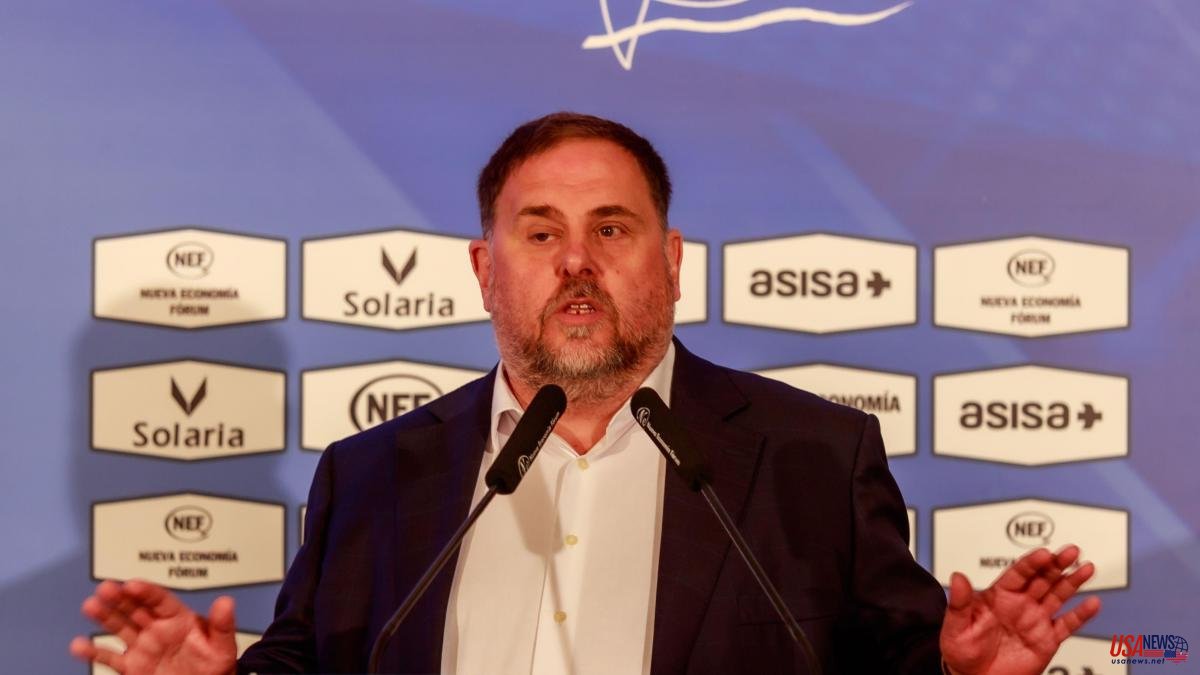 The president of the ERC, Oriol Junqueras, has refused from Madrid to set a date for independence after yesterday the Catalan National Assembly (ANC) asked in a meeting with the president of the Generalitat, Pere Aragonès, to declare it in the second half of 2023, coinciding with the Spanish presidency of the Council of the European Union. An initiative that was immediately rejected by the Minister of the Presidency, Laura Vilagrà (ERC), but shortly afterwards the Vice President of the Generalitat, Jordi Puigneró (Junts), asked to take it into account.

At an informative breakfast at the New Economy Forum in Madrid, Junqueras has also assured that the conflict will end in a referendum and has warned his partners in the Government, JuntsxCatalunya, that the Spanish Government "appreciates" his absence from the dialogue table since that "facilitates their management".

Junqueras, who has been responding to questions from journalists, has wanted to use the masterly tone so usual in him to explain himself. Thus, faced with the question of the deadlines for independence, the Republican leader has made a mathematical metaphor. "In the equation of the independence of Catalonia, time is not an independent variable, that is to say, it is not a question of time, it is not a question of setting a deadline", pointed out the Republican leader, adding that "time is a variable dependent on another variable, this one independent, which is the democratic strength that we are capable of accumulating and that we are capable of explaining to the international community". For this reason, the president of the ERC has considered that "if this force were much greater, independence would be much closer".

And from that premise the notice has come to its partners in the Government. In Junqueras's opinion, the Spanish government has "very little" interest in the negotiating table and "if it sits at it, it always does so dragging its feet and would like to spare it." Consequently, he has warned that the Sánchez Executive "is very grateful" that not all of the independence movement sits down at that negotiating table because, in his opinion, this "alleviates a good part of the pressure that it would have to manage, it facilitates the management of the result of said table".

In this sense, Junqueras has again summoned the whole of the independence movement to "not be afraid to confront democratic ideas in any field and in any space" after assuring that they start from a "solid" position to the extent that their arguments coincide with those exposed by international organizations such as the Working Group on Arbitrary Detentions, the United Nations Human Rights Committee or the Parliamentary Assembly of the Council of Europe.

Despite rejecting deadlines, Junqueras has assured that the conflict must end at the polls and there will be a referendum because, as he explained, the "referendum derives from the democratic principle". "Even the positions of the Spanish Constitutional Court always remember that the Constitution cannot be an impediment to the application of the democratic principle", recalled the Republican leader, who has exposed the doctrine in this sense that the Supreme Court of Canada left with respect to Quebec. . "When there is a part of society that repeatedly, peacefully and democratically manifests itself explicitly in a certain direction, it is the obligation of all democratic institutions or those that consider themselves democratic to establish the necessary mechanisms so that said opinion can have a binding character."

Junqueras has also referred to his relationship with the former president of the Generalitat, which he has described as "excellent" and has expressed that he considers "extraordinarily positive news" the fact that the now MEP "remains outside the reach of Spanish justice while he has been in jail." And even more so considering everything that the Working Group on arbitrary detentions, the parliamentary assembly of the Council of Europe, the United Nations human rights committee or the judicial bodies of Belgium say about our arrests, Germany, the UK or Italy".

However, Junqueras has come to appreciate his time in prison when he was asked if he regretted not having followed in Puigdemont's footsteps. "I have always said that I am very proud of my actions", he has answered to add that "I am grateful for the fact that many more doors are now open to me", alluding to the institutions that have given him support. "Surely whoever made the decision (to imprison him) knew more or less or should have been aware of it," he pointed out.

In another order of things, the republican leader has opined that the departure of Junts from the Government "is highly unlikely and this is confirmed by many of its top leaders", while he has not wanted to enter into the debate on what that government should do party regarding the substitution of the president of the Parlament, Laura Borràs, suspended from her functions.

Finally, in relation to the request of the PSC spokesman in Parliament, Salvador Illa, to be taken into account for the negotiation of the Budgets, Junqueras stressed that it is "normal that he raises it", but he indicated that "it is not only normal , but it is fair” that ERC asks Illa “what was her role when she was a minister when it came to authorizing or allowing wiretaps against many colleagues, as well as her role when it came to allowing police infiltration in independentist youth organizations.” For this reason, he pointed out that "it would be good" for Illa to contribute to providing "a little light" where "there is so much darkness" and to provide "justice where there is so much injustice". "If she wants, she has many things to contribute", she has settled.

The conference was attended by ERC leaders such as the spokesperson, Marta Vilalta; the Government delegate in Madrid and former Minister of Justice, Ester Capella; or the former president of the Parliament Ernest Benach, as well as several deputies of the party in the Congress and the Senate, as well as its spokesman, Gabriel Rufián. There were also representatives of other parties, such as Josep Lluís Cleries (Junts) or Mertxe Aizpurua and Jon Iñarritu (Bildu).