Joy or funeral? The year lost after the pardons

Los 7 de Lledoners is the name of a WhatsApp group through which those who were imprisoned on 1-O maintain personal contact. 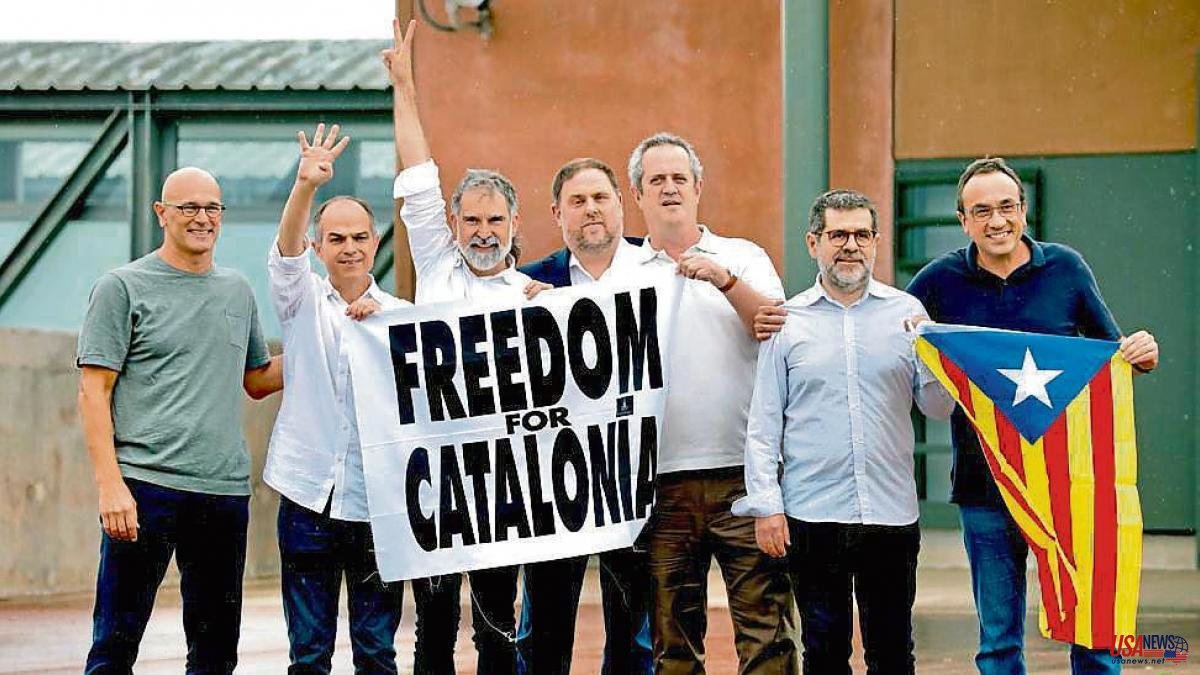 Los 7 de Lledoners is the name of a WhatsApp group through which those who were imprisoned on 1-O maintain personal contact. A couple of days before being pardoned by the Government of Pedro Sánchez, with the announced decision, they took advantage of a prison permit to eat together in a restaurant near the prison and celebrate goodbye to the cell. A year later the chat is still active and it is expected that the meal will be repeated soon. But the freedom of the leaders of the procés has not allowed to grease neither the pact between PSOE and ERC in Madrid nor the relations between Republicans and Junts. Regarding the strategy of the independence movement, the same dilemma that the prisoners had in the minute before leaving through the door of Lledoners and that TV3 captured:

Jordi Sànchez: With an expression of joy or not?

Jordi Cuixart: And so much! Victory, It's a victory!

Oriol Junqueras: No, no. Funeral, funeral, that if we don't seem to celebrate that there are many reprisals.

And a year later? Joy or funeral?

The pardons for "public utility" relieved Junqueras, Sànchez, Cuixart, Jordi Turull, Josep Rull, Joaquim Forn, Raül Romeva, Dolors Bassa and Carme Forcadell. Even more to their families. The President of the Government made them the banner of their reunion and, in the midst of a pandemic, Spain digested them without the need for antacids. Even the PP failed in its collection of signatures and returned to throw itself into the arms of the Supreme Court in search of a censorship of Sánchez, who is kept alive by the retirement of a magistrate and a replacement.

But since then, neither Sánchez has developed the political asset of that decision nor has ERC taken advantage of his investiture pact. Without real dialogue or supporting facts, after the pardons a year has been lost that now the President of the Government, pressured by the electoral blow in Andalusia, intends to recover for something as utilitarian as adding the ERC votes to the 2023 budget.

When they started the game, PSOE and ERC knew that there was no express solution to the Catalan conflict, but they agreed to open a path that has led to a dead end. This week's meeting between Félix Bolaños – plumber minister – and Laura Vilagrà – face of the Pegasus case and dialogue table uniform – aims to start a new process contaminated by Catalangate, the infrastructure investment fiasco and mutual partisan needs. The PSOE is suffocated by the polls and ERC sees how Junts wins public battles on account of the Socialists' neglect of their agreements.

The new commitment is to establish a working method that already existed and address, according to ERC, "the anti-repressive agenda". What Bolaños calls "dejudicialization" was point 2 of the agenda of the reunion that Sánchez delivered to Pere Aragonès last year. In the Government, they expect perhaps inconspicuous but effective news that will end up having repercussions on the pending cases for 1-O in the Constitutional Court –the reform promoted by the PSOE leads to a progressive majority–, the Supreme Court, the National Court, the TSJC or the investigating courts 13 and 18. Investigations, these, opened five years ago and that now can be accumulated. The millionaire bond that ERC presented to the Court of Auditors and that can now be covered by the ICF is also pending return.

In the Palau de la Generalitat they prefer not to speculate but they do offer as a road map the Cilevics report of the Council of Europe, critical of the procés trial, and from which PSOE and PP parliamentarians managed to brush off the references to Spain. The report denounces the criminal cases opened against officials and the arrest warrants in force abroad. It recommends reconsidering the crimes of sedition and rebellion and even reforming the Court of Accounts. Proposals that were buried in a drawer of the Council of Ministers or have already been rejected by the PSOE in Congress.

The right to self-determination does not fit into the socialist ranks and the amnesty law collides with the majority that PSOE, PP and Vox, who already avoided in March of last year even discussing it. The 200,000 signatures delivered by the independence supporters in Congress demanding amnesty rest just as they entered a year ago in the offices of the Palacio de la Carrera de San Jerónimo. No political acknowledgment was required or registered. Now, parties and entities are considering presenting a bill in Parliament to send it to Madrid, where it will wait its turn in the regional queue of Congress.

The different sensitivities slow down the initiatives but not the pressure on the story. On June 30, Cuixart participates in Geneva in a side event on Catalangate at the 50th session of the UN Human Rights Council, and on July 14 Puigdemont awaits the conclusions of the general counsel of the EU Court of Justice on the scope of the European orders of magistrate Pablo Llarena.

Sánchez intends to reach the Debate on the State of the Nation at the end of July with closed agreements with ERC that allow him to outline the main lines of the next budget, shield himself from the left and pacify the Catalan folder. Teams from the Bolaños ministry and the Vilagrà department have two weeks to advance in a framework to reactivate the dialogue table, although Junts' opposition to any agreement flies over. The postconvergents raise their voices although Jordi Turull relativizes an exit from the Government. Junts regrets the "unilateralism" of the Republicans in their relations with the PSOE and ERC recalls that it is Junts who "does not want to be" at the dialogue table. But everyone knows that there is no total reunion without Junts and Puigdemont participating in it.

The immediate question is, can a lost year be recovered in a month? Joy or funeral?