Joseph Ratzinger, a Pope against secularization

The day that Joseph Ratzinger was elected Pope, on April 19, 2005, and he appeared on the balcony of the Vatican basilica to give his first urbi et orbi blessing, he opened his arms in greeting to the square and his black sleeves stuck out too far. 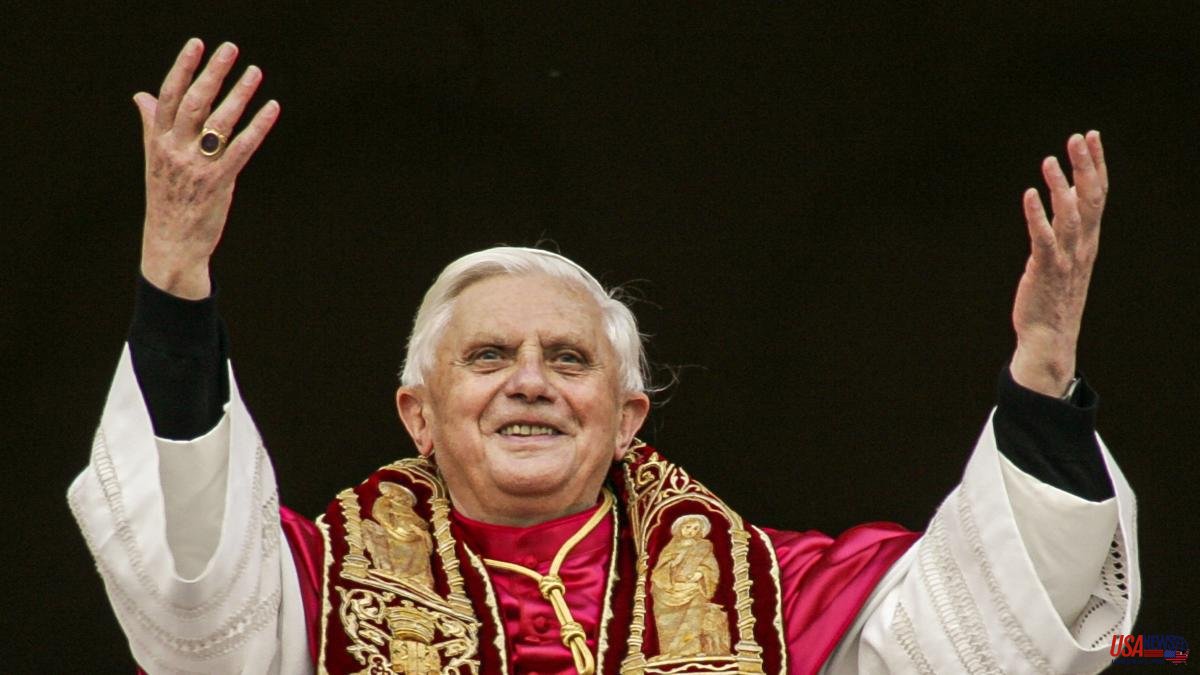 The day that Joseph Ratzinger was elected Pope, on April 19, 2005, and he appeared on the balcony of the Vatican basilica to give his first urbi et orbi blessing, he opened his arms in greeting to the square and his black sleeves stuck out too far. underneath, making it clear that the white chasuble was a little too small for him. Those of us who had come running out of breath to Saint Peter's Square in Rome as soon as the white smoke announced that the conclave of cardinals had chosen the successor of John Paul II, could not help but notice that detail of the clothing that illustrated the combination of certainty and unpredictability that accompanies a key periodic event for the Catholic Church. There are always at least three sizes available, but despite the fact that the then prefect for the Doctrine of the Faith concentrated all eyes, no one dared to make sure if they were suitable for him.

Joseph Ratzinger, who had just turned 78, was elected Pontiff by a Church anguished by the onslaught of modernity, which saw in the iron German cardinal a guarantee of doctrinal firmness in the face of secularization. In the mass prior to the conclave, the aforementioned had presented himself as a prophet of calamities, calling the priests to a "holy concern" before the "dictatorship of relativism." It was almost a 'government program', which captivated the most conservative cardinals and ended up convincing the entire college of electors. Joseph Ratzinger was elected Pope at the fourth ballot in a brief conclave of just 25 hours, and decided to call himself Benedict XVI.

Although in later messages he promised ecumenism and offered dialogue to other religions and non-believers, and over time he consolidated a humble style that qualified his reputation for severity, his reputation as a rocky defender of the faith never abandoned him. He opposed the spirit of the times, which advocated a dilution of tradition. Meanwhile, the name Panzerkardinal, coined by the media in Germany, was triumphing in the international press, where the election of a compatriot for such an important position did not produce the outbursts of joy that one might imagine.

If his eight-year pontificate, short-lived in terms of modern ecclesial history, was bristling with incidents, successes and failures, and traversed by the perennial scourge of sexual abuse of minors by priests and religious, by the scandals of Vatileaks and due to not a little hostility from sectors of the Church itself, his unusual resignation from the papacy in 2013, earned him an aura of respect and broke the mold.

"After repeatedly examining my conscience before God, I have come to the certainty that, due to advanced age, I no longer have the strength to adequately exercise the sallow ministry," he said on February 11, 2013. The resignation became effective on day 28.

In everyone's retinas were still the images of John Paul II, terminally ill and Pope until the last minute of his life, between debates about whether this exhibition gave dignity to old age and illness or if it eroded the institution due to the evident inability to govern. The courage with which Joseph Ratzinger announced, in rigorous Latin, that he was leaving the chair of Saint Peter aroused general recognition.

"His analyzes did not depend on the mainstream, but arose from critical thinking, even at the cost of popularity," said German journalist Peter Seewald, a historic biographer of Joseph Ratzinger, who wrote two years ago in an interview in Berlin with this correspondent. in 2020 he published a definitive biography titled Benedict XVI. A life. A profound connoisseur of the life and work of the emeritus pope, Seewald argues that Ratzinger "was always willing to change and do things that no one had dared to do before, and this is demonstrated above all by his resignation in 2013 due to age, with which he revolutionized the papacy. His resignation was the result of his reasoned thinking and prayerful decision-making.”

Seewald, who had already published four books-interviews with Ratzinger –two of them being this cardinal–, held new conversations for this biography with the emeritus pope in 2018 and with dozens of witnesses close to him. It was precisely he who unleashed the first alarms by reporting the painful facial erysipelas suffered by the emeritus, and his difficulties to speak, already with a small voice. Since his farewell to the papacy, he lived within the walls of the Vatican itself, in the Mater Ecclesiae monastery, set up for him, and where Pope Francis visited him regularly, not always with cameras to record. And so it has been until the end.