Joaquín Luna: "When I say no to a woman, I feel guilty" 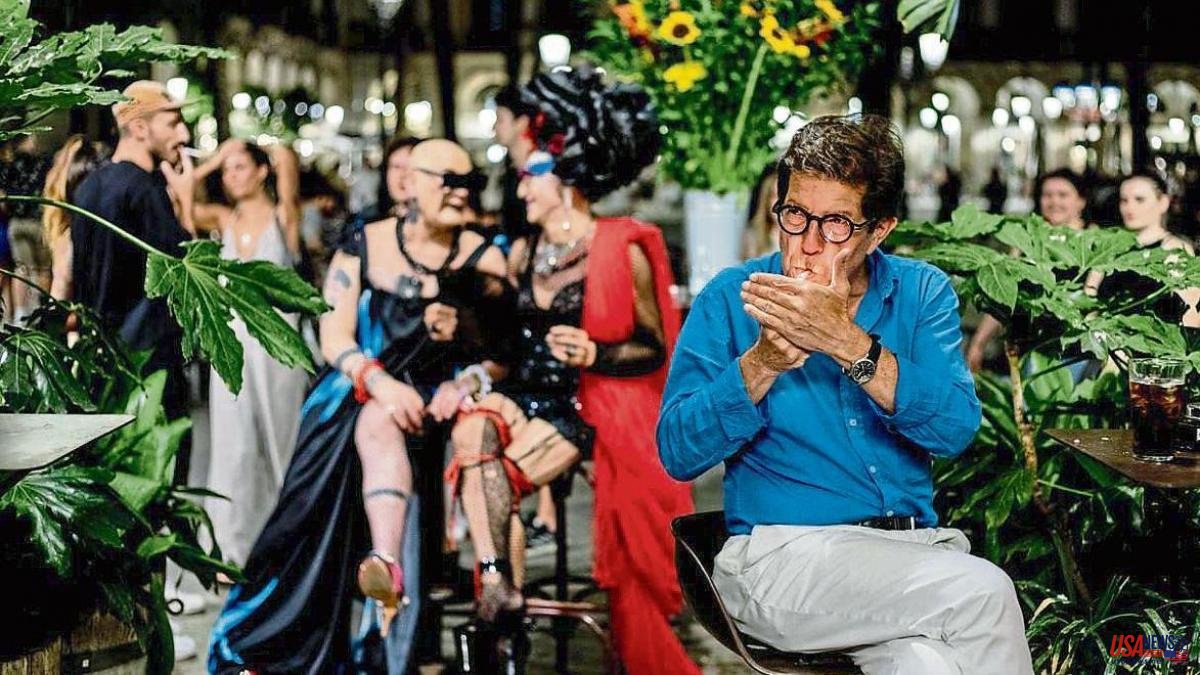 It's midnight. That time when Cinderella runs home while Joaquín Luna asks for his first glass of Havana Club aged 7 years with Coca-Cola (wow, the Cubalibre of a lifetime) ready to lose, if it lends itself, not one but the two shoes "I have tried to stay up as late as possible and get up as early as possible," says the dean of Catalonia's divorced journalists, born, curiously, the day Fidel took Havana.

So many hours of flight, or rather nights lying in bars, have made him an authority on the nightlife. He now shares his experiences, which are not few, in Esta ronda la pago yo, a book written with the same dandy rogue tone that he uses in his already famous articles in La Vanguardia. The appointment is in the Ocaña of the Plaza Real. The hour, the one mentioned. And the day, a Thursday, the one he defines as the “most promiscuous of the week”.

Why is he the most promiscuous?

It is the only night of the week in which the people who are single and those who have a partner coincide. Since the world of the night has disappeared from Sunday to Wednesday, Thursday has that funny meeting point. Surely it is the best day to go out.

And with what expectations do you leave?

Those of us who like to go out at night have always looked for different things and meet women without looking at whether they are single, married or divorced.

Going out at night is going to look for women?

No, but initially the great attraction of the night was what we then called flirting. Now, instead, I go out for the pleasure of going out. I've reached that point where flirting isn't the most important thing.

What is the most important?

Have a good time, not keep an eye on the clock and meet people I wouldn't meet during the day. You can find someone with whom you have nothing to do and end up buying him a drink, as the title of the book says. It is this spirit of doing things just because.

If I can, yes, if it arrives, it's fantastic.

In the book he writes: "Going out at night had the objective of meeting a woman and sleeping with her in the shortest possible time"...

I understand that it may sound harrowing, but this was the male objective. You tried to make it fast but the women determined the rules of the game. That prevailed so typical that on the first night, although he liked you, he was frowned upon. And in the second, yes. I still find it ridiculous now. The rules of the game have changed.

Now is a good time, good hours. You no longer have to chop so much stone. Although there are still few who take the first step. Plus, now you can laugh the day you're not a champion. Before you had to play the role of the man you had to be. The men of my generation had a lot of pressure.

Isn't this freedom now the fruit of age?

Yes, mostly. And I am delighted with this relaxation that age gives you, but it has its drawbacks. You are totally invisible.

For me, retiring at night is impossible, it would be like saying that I will no longer go out during the day. The basic thing is to be aware of how old you are; if not, you make a fool of yourself. It's pathetic to see a man of a certain age chasing young girls.

The waiter says that it is already one o'clock and we must go.

I, who like the noise and the night, have a very bad time with this current world of rules. The night should be free and anarchic and now it's very regulated, that's why we're in the doldrums.

Have you ever lived next to a nightspot?

No, but from restaurants that make noise and smoke.

But they close before...

I claim that the noise goes with the city, and a city that wants to be important cannot close from midnight to seven in the morning. It annoys me that the terraces in Plaça Reial close at one o'clock and you have to go inside the premises. The left today is sad, boring and prohibitionist. It is becoming very moralistic, like the Church.

Is nightlife incompatible with a healthy life?

You will die just the same. I sincerely prefer the risk of dying before. No one guarantees me that, if I don't smoke and lead an orderly life, I will live well and live longer. And, if they end up being five less, well, good.

He is very critical of dating apps.

Yes, and I say this after having tried them. They have been the most disastrous appointments I have ever experienced. There is a tendency to try to find the ideal profile and then you see the person and you don't like it. I learned that it was better not to meet to eat, but to make a coffee, faster and cheaper.

On a date they asked me about my hobbies and I said a few, and bullfighting. It was as if he had dropped an atomic bomb. You have the feeling of going through an exam. And the men of my generation are not used to saying no, but to being told no to us. When I'm the one saying no to a woman, I end up feeling guilty.

In the book it seems that he brags about collecting women's toothbrushes in his house... there are those who accuse him of micromachismos.

I promise you that I brag more than the times that I have been given pumpkins. Interestingly I have found many women who are not dumb who like my writing. I am sincere and sometimes I have passed, I admit it. Those of my generation have things that we don't even consider being sexist, like opening the door or accompanying the taxi. I may sound sexist, but I'm not.

I was going to ask him who pays for the round, but he already has...

Because I got there first. And I like. The night lends itself to generosity. During the day people think about making money and those of us who go out at night think about spending it.

Do we do a second round and I pay?

Yes, I would take another.