Jeremías Gamboa: "You can escape from your country, but never from its shadow"

When Jeremías Gamboa (Lima, 1975) published his first novel, 'Contarlo todo' (2013), he received praise from a Nobel laureate, Mario Vargas Llosa, and from a good part of the critics. 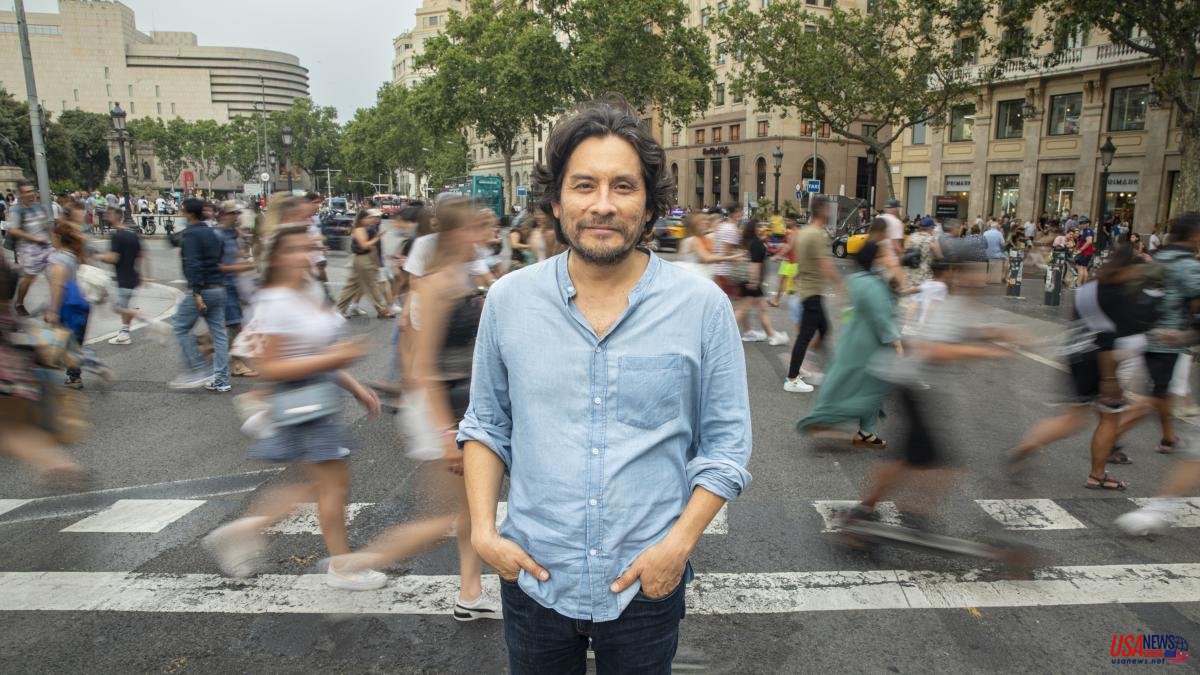 When Jeremías Gamboa (Lima, 1975) published his first novel, 'Contarlo todo' (2013), he received praise from a Nobel laureate, Mario Vargas Llosa, and from a good part of the critics. That torrential work of a writer in search of his voice, recounting an entire life, is now followed by 'Luminous Animals' (Random House), which takes place in a single night, which a Peruvian student experiences on the campus of the University of Colorado, in Boulder.

What was the initial impetus for this book?

One of those nights, some of my friends in Boulder, where I studied, got into an argument about whether or not that Colorado campus where we were was a city. That dialogue was turning into a novel, basically it was a conversation about the state of the world, identity and its impostures.

The spaces where things happen are very important, they are described with the precision of an urban planner or interior designer.

The place exists, it is a campus with an impressive library, great facilities and many professors, it represents the thriving North American academy. Boulder is a city where Patti Smith or Lou Reed can play and at the same time there are forests with elks and a wild nature, in which the world of reason has settled. My character's itinerary goes through purgatory, heaven and hell, different strata. There are basements and some elevated viewpoints to contemplate the lights of the plain.

It is a novel that seems to have a cinematographer.

My training is audiovisual, it's what I studied. I have a story set in a painting by Hopper, and I saw Boulder like that, with Hopper's light. Colorado is a chiaroscuro.

His book falls within the tradition of campus novels.

We have Don DeLillo's 'Ruido de fondo', John Wiliams' 'Stoner', Javier Cercas's 'El tenant', a part of Bolaño's '2666' is also academic... Mine would rather be Kerouac on campus, something carrot, not so wild, but with bars, canteens, youth. My characters don't skip classes, they study. Nearby, in Boulder itself, is Naropa University, home to the Jack Kerouac School of Allen Ginsberg and William Burroughs. Lucia Berlin spent her last years in Boulder as a teacher, where John Fante also lived. It is the B side of the academic novel. On the Kerouac road it starts on a campus too, they go on vacation between two semesters, because the beats also went to class.

It is a novel about friendship. How does he feel?

It's a character in a new environment, an animal that we've introduced to a new habitat. These are the first days of emigration, in which you have to learn everything, how to order a beer, how to greet people, you are in a very high state of attention so as not to make a mistake. My first days in the US had this enormous mental stress. I narrate that enormous anxiety produced by looking, the fear of not fitting in. There friendship appears as a contrast, it is the possibility of an integration. Basically, it is the story of a friendship between a boy from the south and a boy from the north. Even the Americans are emigrants, none of them were from Boulder, and traveling to another state supposes a huge displacement, continental. The dark part is extreme loneliness, the solipsism of the emigrant, and the light part is friendship and love.

The conversation codes of the night are very different from those of the day.

In the very masculine soap operas of the boom, men talked to each other in a bar. On campus, in the disinhibited night, people reveal their affairs, as also happens in the game of seduction, in which you are forced to release declassified documents about yourself. At first, very favorable but then not so much so as not to look like a peacock. There is that game of truths: what we tell ourselves and what we don't. By migrating, you keep the half of you that arrives at the new place, not the half that was left behind. My parents migrated from Ayacucho to Lima, they were both Quechua speakers, and something of that is there.

Tell us about that trip of your parents.

As my father was whiter, they told my mother, who did domestic service in houses in San Isidro: 'Perhaps your son can work in a bank.' Advertisements for housemaids demanded 'good looks', which meant the whiter the better. My mother burned all her Andean traits to be from Lima. In the US I do something like that, and I've seen it in others. At night, moreover, you project something, you are not who you were, you show an attitude to seduce, you abandon what is true.

In fact, we will discover that several of the things that are told in the dialogues are false.

If we are not in pure pathology, falling in love leads to the truth, to the knowledge of dark areas. Love is an activator of memory and, therefore, of pain. When you fall in love, you feel a lot. Love weakens you and empowers you, it forces you to feel, and feeling is extremely dangerous. The night is the place of alcohol and the stimuli that take you to states of consciousness that you didn't think you had.

I have a sentimental side that comes to me from Manuel Puig or Jorge Amado, who in turn was from Stendhal before. The point of view had to be bisexual to be really valuable. Tolstoy's men are of great beauty, he is an author capable of telling you about the chat of two fifteen-year-olds and of getting into Napoleon's head. Toni Morrison gets inside the heads of a rapist and many women, and she knows how to see beauty on both sides. If you're not bisexual, it's like playing soccer with one leg. In imagination, you have to have that periscopic vision.

There is an unwanted pregnancy, and contradictions regarding the possibility of abortion.

The novel shows a deck of possibilities in favor of the decision. People do not ask for an abortion but rather that each woman can decide, and there are as many options as there are women: to have it, not to have it or not knowing what to do. It's a very real issue, because nights have consequences. In Kerouac you don't see the next day, you don't see if the Mexican woman she slept with got pregnant. I think it's up to men to be attentive to that other side, the feminine, and build these themes together with the narrators. There are four guys looking for a hookup and that's there. The novel raises the issue of taking root, and giving birth means establishing oneself in the place where that happens, it is adhering to a space. I wrote the book when abortion was free in the US, Lima women went to Miami to have an abortion, because in Peru it is punishable, there is a brutal level of backwardness. Literature has to take care of what is not counted.

It is the first night in which he gives himself to the world, he has come to study in a non-place, he lives refugee in the books in a Borgean way, to avoid real things, but they invite him to an evening in the dark and there he explodes everything he carries on his back without being aware of it. Teju Cole or Aleksandar Hemon are two migrant writers, new Americans, who tell us that you can escape from your country but never from its shadow.