The third day of the Copa del Rey Mapfre has been the last of the first phase of the competition. 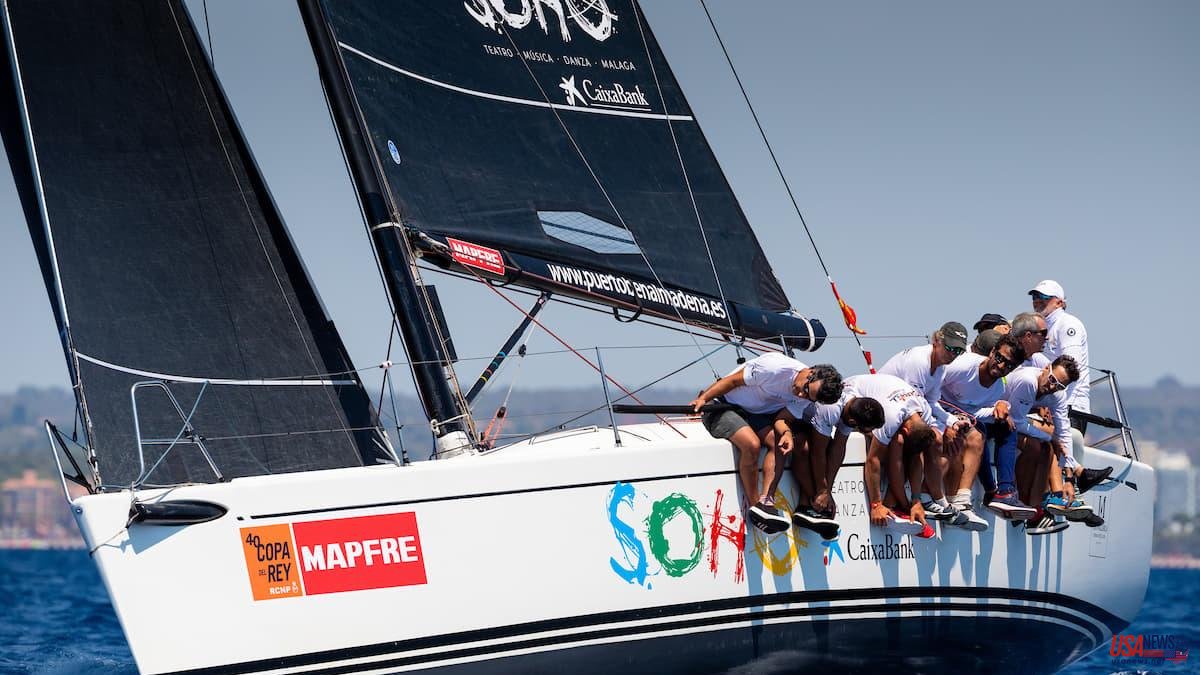 The third day of the Copa del Rey Mapfre has been the last of the first phase of the competition. Starting this Thursday, the final phase begins, in which the classifications are compressed into the nine participating classes and many teams once again have clear chances of winning the prestigious Real Club Náutico de Palma trophy.

Of all the sailboats that take part in the 40th edition of the Copa del Rey Mapfre -there are finally 109 that are distributed in the three regatta fields of the bay-, none has shown such spectacular mastery of its class as the Teatro Soho Caixabank, owned by Javier Banderas, the brother of actor Antonio Banderas.

They compete in the ORC2 class, which brings together 14 contenders, and they have won all six contested races. In the first, on Monday, they crossed the finish line at the same time as Estonian Aivar Tuulberg's Katarina II and the committee gave them both winners. But since then no one has overshadowed them.

The explanation for this dominance is clear to Javier Banderas: a very well-knit team and bringing Luis Doreste, the most prestigious of the great Spanish sailors, on board as a tactician. "The truth is that Luis covers the shortcomings of many of us, but everyone collaborates on board and sailing for so many years together has to bear fruit," explained the Malaga shipowner on Monday, who has already collected four Copas del Rey Mapfre (2010 , 2017, 2018 and 2021).

In ORC1, the battle between the three DK46 models continues in style, although Alexandre Laplaza and Óscar Chaves' HM Hospitales remains firmly in the lead against Estrella Damm skippered by Luis Martínez Doreste, second, and Jaime Colsa's Palibex , which leads José María Torcida, third, as helmsman.

The Aifos of the Navy, to which King Felipe returned this Wednesday after suspending his sports activity yesterday to receive the President of the Government, Pedro Sánchez, in an audience, is in seventh position in this ORC1 class, after an unfavorable day . They added a seventh and a ninth place.

The accumulated points lose importance now, because this Thursday the final phase begins and what counts is the position in the table. That is, the first now starts with one point, the second with two and so on. The classification is compressed again in all classes and many teams once again have a real chance of winning the Copa del Rey Mapfre.

For HM Hospitales, for example, which was already eight points ahead of Estrella Damm, the preliminary phase and final phase system is very unfavourable, since now they will only have a one point advantage over the second. But the system is focused on bringing back the excitement in all classes, even those with a great dominator, and that is clearly achieved in this way.

In the one-design Swan 50 class, in which the owners are also the skippers of the boats, Barcelona's Pablo Garriga's Tenaz, the only Spanish sailboat in the class, has managed to place second in the standings.

El Tenaz, with Antonio Piris as tactician and Alicia Ageno as navigator, won the first regatta on Wednesday and was fourth in the second. The first is German Hendrik Brandis' Earlybird, which started the week badly, with an 11th in the first regatta, but has since recovered its competitive rhythm, which accredits it as the class leader in previous editions of the Copa del Mapfre King. He hasn't won any races yet, but he starts among the first in almost all the races and that has given him the lead.

As in all other classes, entry into the final phase compresses the ranking, so no one can claim victory until Saturday.

Three tests were held in the Herbalife J70 class this Wednesday and Luis Bugallo's Les Roches – Tripsst team signed an almost immaculate card (1 1 2) that helped them win the initial phase ahead of Gustavo Martínez Doreste's Alcaidesa Marina (2 2 6). The defending champion, Juan Calvo's Let it Be, who went out into the water as leader, returned to the RCNP third (6 3 4).