Jair Bolsonaro has the support of Neymar, in debt to fix his problems with the Treasury

With the World Cup in Qatar just around the corner, Brazilian President Jair Bolsonaro has one last chance to avoid defeat in the elections on October 30 against the favorite Luiz Inácio Lula da Silva. 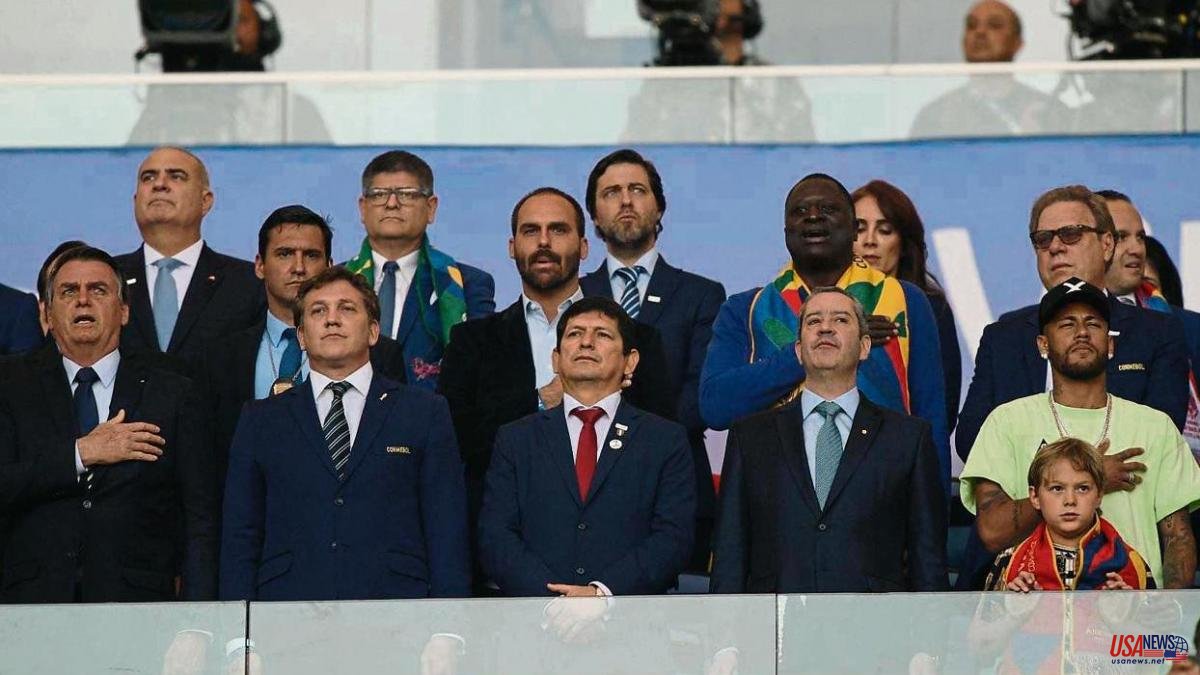 With the World Cup in Qatar just around the corner, Brazilian President Jair Bolsonaro has one last chance to avoid defeat in the elections on October 30 against the favorite Luiz Inácio Lula da Silva. The only way out for him is to become the candidate for the soccer team.

For some time now, the ultra-conservative president has been encouraging his voters to go to the polls wearing the yellow uniform, a symbolic appropriation that has inconvenienced millions of canarinha fans who support Lula. In cases like this, you have to use your imagination. The solution proposed by a Lulista waitress in Ipanema has been to stamp the red star of the Workers' Party on the shirt.

Bolsonaro has something more powerful for his plan to overcome the electoral party in the last minutes: the increasingly active support of Neymar. Rarely has a footballer dedicated as much time –40 minutes– to an electoral propaganda event as the PSG striker did last Monday. "The World Cup is very close and, with the president re-elected and Brazil champion, everyone will be happy," he predicted at the start of a streaming broadcast that lasted 22 hours. Neymar may be right and Brazil win the World Cup, although for this he will need to get more involved, as the eloquent Tostão demanded of him last week. "The seleção runs the risk (...) of having difficulties in midfield, partly because Neymar does not participate in defense". As for the prediction that Bolsonaro will win and everyone will be happy, the first is unlikely – Lula leads the polls – and the second is impossible. Brazil is divided and the president has the highest rejection rate in history.

The truth is that Bolsonaro is such a toxic and polarizing character that it is hard to imagine why Neymar loves him so much. "Why did he decide to position himself?" Asked the moderator in the online event. "Because in the most difficult moment of my life, the president was the first to support me publicly." She was referring to the accusation that Neymar had raped his girlfriend in a Parisian hotel in 2019, a complaint that was later withdrawn. "The president believed in me and now I believe in him," Neymar said.

But perhaps the most difficult moment for Neymar was another. Two years ago, the Brazilian Ministry of Finance fined him 189 million reais – about 35 million euros – for not declaring his income during the period from 2011 to 2013. It was later reduced to eight million reais. Even so, the Neymar family did not want to pay. In 2019, the father of the former Barça soccer player secretly met with Bolsonaro and with Finance Minister Paulo Guedes. Problem solved.

Lula suggested a couple of weeks ago that this, more than love for the country and the traditional family, is the real reason for Neymar's Bolsonarism. “Everyone has the right to elect the candidate they want, but I think he (Neymar) is afraid because if I win the elections I will know what Bolsonaro forgave him about his debt to the Treasury. It is obvious that Bolsonaro reached an agreement with Neymar's father."

The fear of the Neymar is well founded. "If Lula wins, without a doubt the Treasury will investigate to find out exactly what happened in that meeting and we must bear in mind that Neymar's father's methods are so nebulous that he is being tried in Barcelona," said Juca Kfouri, author of the biography. of Sócrates, in a telephone conversation with La Vanguardia.

Neymar's support for the president is not an anecdote. According to Bolsonaro's strategists, quoted by Mónica Bergamo in the Folha de São Paulo newspaper, the video that Neymar published days before the first round of elections was decisive for the in extremis increase in the vote for Bolsonaro. It remains to be seen if the effect is repeated this Sunday.

At least Neymar only wants to evade taxes by supporting the ultra president. The other soccer players most fervently supportive of Bolsonar in their public statements are goalkeeper Bruno, jailed for murder, and Robinho, sentenced in Italy to nine years in prison for rape.

Romário, for his part, who was elected senator for Rio de Janeiro on October 2, has been as opportunistic in politics as he was in goal. He declared himself a close ally of the president in the electoral campaign, aware that it is almost impossible to win an election in Rio without being a Bolsonarist. But at the last moment – ​​too late to change the outcome – Bolsonaro decided to withdraw his support for Romário. This provoked a reaction in the former Blaugrana striker that reminded him of those angers when he was told that he was offside. He announced that he would not go to Bolsonaro's rallies in the second round of the presidential elections. There were even those who wondered if he would join his old partner in the front of the Verdeamarella of the '94 World Cup, Bebeto, a deputy in the state of Rio who supports Lula.

After meeting with Bolsonaro's team, Romário reconciled with the president. Last week he allowed himself to be photographed happily speaking at a rally with the candidate in Baixada Fluminense, located on the poor and violent outskirts of Rio.