Ramallah, Palestinian Territories -- Palestinians have planned a memorial service for Shireen Abu Akleh, a journalist who was killed covering an Israeli raid on the West Bank. 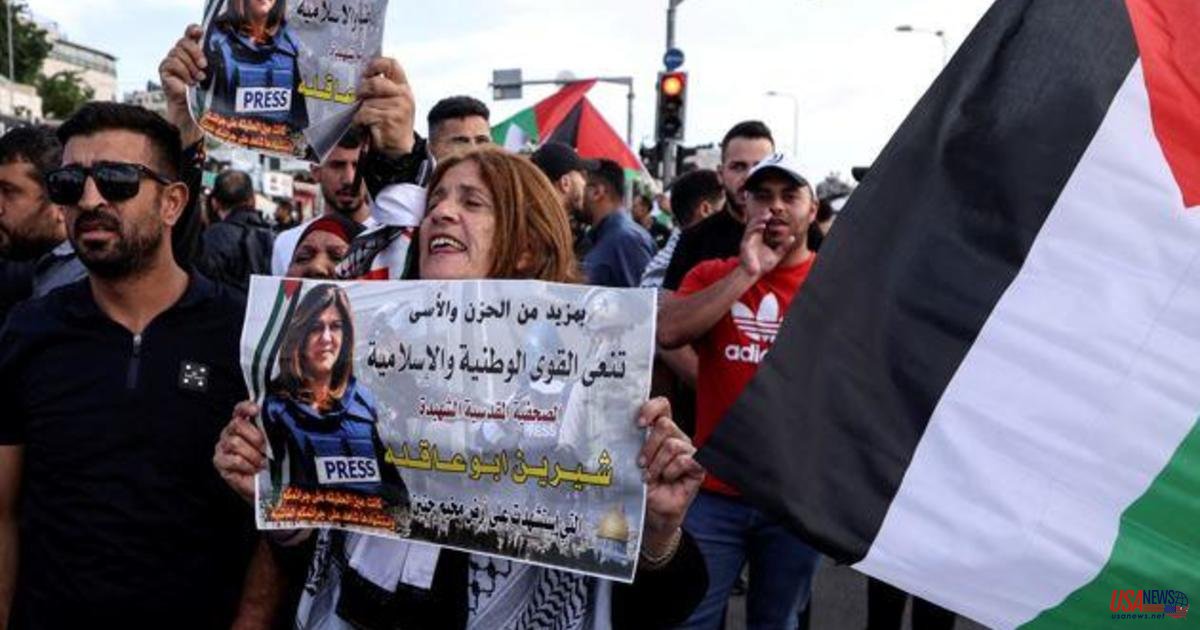 Ramallah, Palestinian Territories -- Palestinians have planned a memorial service for Shireen Abu Akleh, a journalist who was killed covering an Israeli raid on the West Bank. However, they rejected U.S.-led requests for a joint investigation into her murder. Abu Akleh, 51-year-old Palestinian-American, was killed in clashes at the Jenin refugee camp. This is a key flashpoint in the Israeli/Palestinian conflict.

Late Wednesday, Benny Gantz, Israel's Defence Minister, admitted that it could have been "the Palestinians that shot her" or fire "our side". This seemed to contradict Prime Minister Naftali Bennett’s comments that she was "likely” killed by stray Palestinian gunfire.

Gantz stated that although we aren't sure how she was killed, they want to find out as much as possible.

Al Jazeera, Palestinian officials, witnesses, and Abu Akleh were all reported to have been killed by Israeli forces. The network claimed that she was being targeted "deliberately" as well as "in cold blood."

Israel demanded a joint investigation into the murder and requested that the Palestinian authorities hand over the bullet which struck Abu Akleh to forensic examination.

AFP was told by an Israeli security source that Israel was ready to inspect the projectile before US and Palestinian officials "out of transparency".

While the European Union is calling for an independent investigation, the United States insists that the killing be transparently investigated. Michelle Bachelet, UN human rights chief, echoed these calls.

Hours after her death, an initial autopsy and forensic exam were performed in Nablus, Israel-occupied West Bank. However, no final conclusions have been made.

Hussein Al Sheikh, a senior official in the Palestinian Authority, is a confidant of President Mahmud Abbas and has ruled out a joint investigation.

"Israel requested a joint investigation, and to be given over the bullet that assassinated Shireen the journalist," Al-Sheikh said on Twitter. Al-Sheikh stated on Twitter that they refused to do so and that their investigation would continue independently.

"We will inform her #USA, #Qatar family and all other official authorities of the findings of the investigation with high transparency. All the evidence, witnesses and indicators confirm her assassination.

Ned Price, spokesperson for the U.S. State Department, echoed sentiments expressed by Tom Nides, American Ambassador to Israel on Wednesday. He condemned Abu Akleh’s murder and called for an "immediate" and thorough investigation into the shooting. It was "an affront against media freedom everywhere," Price said.

We are deeply shocked by the murder of Shireen Abu Akleh, an American journalist, in the West Bank. It is imperative that an immediate investigation be conducted and that all responsible are held accountable. Her death is a serious blow to media freedom worldwide.

After joining Al Jazeera 1997, Abu Akleh became a prominent Arabic broadcaster. She also covered the second Palestinian Intifada (or uprising) from 2000 to 2005.

Antoun, her brother, said that she was "the sister of all Palestinians" at their family home in Israeli-annexed East Jerusalem. "What happened cannot remain silent... She will never be forgotten."

As a sign of her status as a Palestinian woman, she was scheduled to be presented with a state memorial by the Palestinians at Ramallah's presidential compound on Thursday morning.

Nearly a year ago, an Israeli airstrike had destroyed a Gaza building housing offices for Al Jazeera's news agency AP.

Tensions have risen again in recent months, as Israel faces a wave attack that has killed at least 18 people. This includes an Arab-Israeli officer of police and two Ukrainians.

According to AFP, 31 Palestinians and 3 Israeli Arabs died in the same time period. These include attackers and those killed by Israeli security forces.