Is it time for Alcaraz? 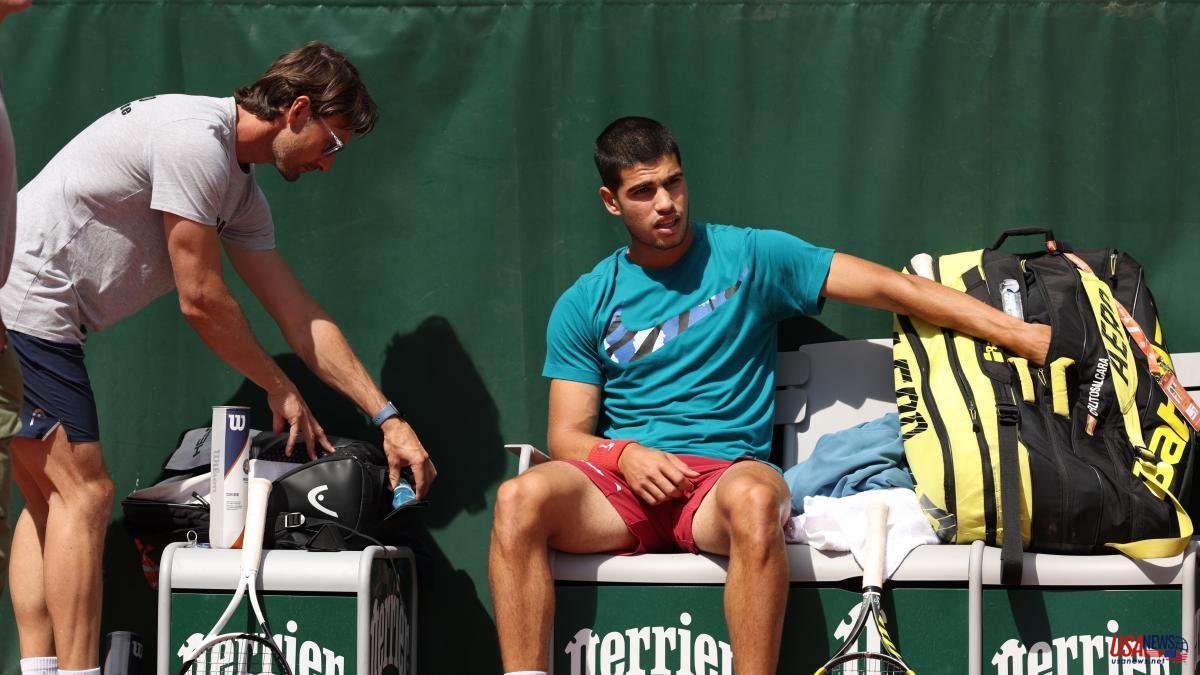 The drift of the next two weeks will mark the extent of its possibilities, at least in the short term. Paris faces one of its most uncertain editions.

What balance will this edition of Roland Garros leave us?

How much pain can Rafael Nadal take? Has Novak Djokovic returned? What will become of Alcaraz? And what do Medvedev, Zverev, Tsitsipas have to say...?

Do we give way to a new order in the world of tennis?

Alcaraz, all this is looked at calmly. He enjoys the relaxation of a teenager, he lives with relative pressure, since nothing is at stake yet. He has run a lot in recent months, and yet he is in the embryo of his career.

He laughs at everything.

If we put his career in perspective, magnificent comparisons appear. Àlex Corretja, television commentator and former tennis player, cites him along with Becker, Chang or Wilander.

-Thirty or forty years ago, all of them experienced abrupt outbreaks. As kids, they were able to show up at a Grand Slam and break everything,” she says.

(Inevitably, the chronicler goes back to Roland Garros in 1989: in the round of 16, a cramped 17-year-old Michael Chang had dropped the huge Ivan Lendl with balloons and spoons, and then gone on to win the title ).

–But, is Alcaraz going too fast? Corretja is asked.

His growth as a tennis player is impressive. However, no matter how fast the steps she has taken, she has not skipped a single one. I see similarities with Emma Raducanu. Alcaraz is doing everything she has to do, with the difference that she is going faster than the rest. And also, as support they have a great team, with Juan Carlos Ferrero at the helm. Having a coach like Ferrero, with everything he has experienced and won, is a gift, don't you think?

The team has safeguarded Alcaraz: it has stopped him. The Murcian, the tennis player of the moment, had chained two titles (Barcelona and Madrid) and appeared registered in a third, the Masters 1,000 in Rome.

However, he would not make his debut at the Foro Italico. The wise men were going to lay him fallow. While Nadal, Djokovic, Zverev or Tsitsipas were fajando in Rome, the Murcian played golf and sunbathed on the beach.

"The whole team had learned that what had happened in Monte Carlo could not be repeated," says Corretja.

–What do you mean?

-A week before going to Monte Carlo, Alcaraz had won the Masters 1,000 in Miami. When he showed up in Monte Carlo, he had arrived molten. That couldn't be.

(in Monte Carlo, Alcaraz had lost in his debut against Sebastian Korda)

– And how do you see him now in Paris? – Jordi Arrese, commentator and former tennis player, is asked.

(Alcaraz debuts today in the fourth turn of the Philippe Chatrier against Juan Ignacio Lóndero, Argentine, today 141st racket on the ATP circuit).

-You have to respect Djokovic and Nadal, how can you not do it? It is not clear how Nadal is doing. But if he's not in as much pain, he's always going to be a favorite. And Djokovic? We have already seen it in Rome. He is very strong (last Sunday he won the title). Alcaraz? He is one of the three favorites, along with the other two.

– And the rest of the applicants? Arrese is asked.

They are in the background. I do not quote them because I think they will not win. I don't see them mentally consistent, I don't see the nuances that the three favorites have. Al Thiem of other times would have included him on the list. But Tsitsipas, Medvedev or Zverev are not up to that Thiem...

–But don't you think that Alcaraz is still too young to aspire to a great like this?

I don't see it that way at all. Alcaraz has everything you need as a tennis player: physical, power, strength and head. The only doubt he raises in me is his lack of experience in five-set matches. You have to see how he works those commitments. You have to know how to handle them, you can't live them with maximum intensity all the time. You must ensure the minimum wear and tear, and in that he is still very young.