Iranian youth to the Guardians of the Revolution: "It is the year of blood, you will be overthrown"

"Put aside the devil. 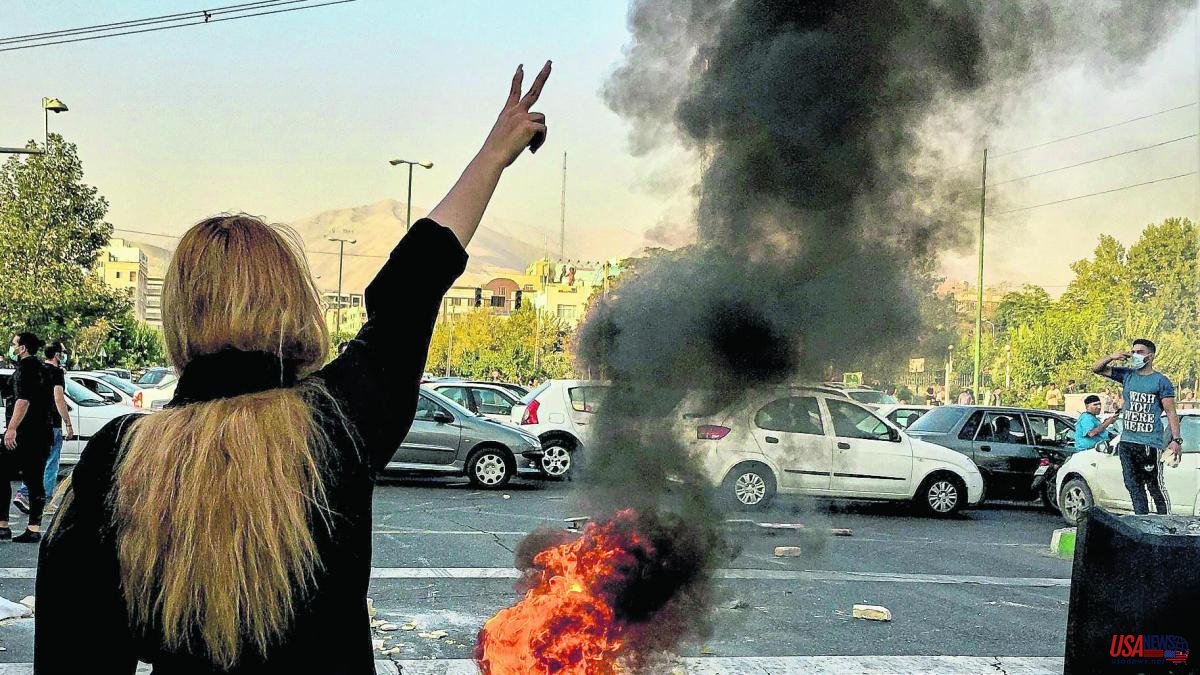 "Put aside the devil. This is the last day of the riots, don't go back to the streets," said the head of the Revolutionary Guards, Hussein Salami, yesterday. The recipients were the thousands of young Iranians who They have poured into the street for more than 40 days, whom he accused of having been deceived by Iran's enemies. "Do not wear the American uniform," Salami said when addressing a crowd that yesterday attended the funeral of those who died in the attack on the Shahsherag mausoleum on Wednesday.

That day at least one man, according to security cameras, shot at pilgrims visiting this important monument in the city of Shiraz, in the southwestern part of the country. At least 15 people died and 19 were injured. Hours later, the Islamic State claimed responsibility for the attack and announced more attacks in the country. Since then, the authorities, supported by an overwhelming display of state media, have linked this massacre with the protests that –according to their arguments– have damaged the country's security.

Some authorities have blamed youth on the street, whom they frequently call "hooligans," for having created the conditions for attacks like Wednesday's. "Do not play with the patience of the Iranians," added General Salami, who yesterday was accompanied by other high-ranking Iranian military forces. But the protests continued hours after his speech. "We are here for Mahsa, for those who have died and for those who are detained," a young man who requested anonymity explained yesterday.

The young man was part of one of the many protests that took place yesterday in Tehran and other cities in the country, where groups of people, some larger than others, gathered again to sing slogans and remember that their voices have not been silenced. "He who laughs - alluding to the highest figure in Iran - is the assassin of Shahshegarag", was one of the chants that were heard yesterday and that had to do with Wednesday's attack in Shiraz, which has further deepened mistrust and the division that already existed in the country. Other chants read: "Basijis, IRGC (for the Guardians of the Revolution), you are our Daesh." Or "Mullah, lose yourself." Or "This is the year of blood, Seyed Ali will be overthrown."

Some political leaders who had been silent until the attack, such as former reformist president Mohamed Khatami, spoke out. He expressed solidarity with those who died in Shiraz but also in other cities during these weeks. "Governments must maintain a balance between good governance and also listening to critical voices - even if they are unfair," said Khatami, whose image is banned from Iranian media. His words were immediately answered by the Keyhan newspaper, whose director is appointed by the supreme leader, who accused him of being a partner in "the crimes that have happened to the country."

In recent days, some voices have emerged calling for a dialogue in the country, but the gap that divides the regime from the population that rejects its actions is getting bigger and bigger. Journalist Ahmad Zeidabadi, who spent years in prison and was subjected to harsh interrogations, agreed days ago to speak on public television. An extremely unusual invitation for a man like him. There he spoke honestly about what he thought of the situation, including rejection of the government's attitude. He maintains that the protests must come without violence. The next day he said that he had not slept. On one side was the fear of being arrested, and on the other, being attacked by those who criticize him for being part of a debate in the main public media.

Another 22-year-old woman who asks to be identified as Nahid explained last Friday in a cafe that many of the young people who attend the protests have many doubts about the regime's versions. "Why is it happening on the same day that they feared the mobilization for the murder of Mahsa Amini?" Said the young woman and added: "They have lied many times. They say, for example, that Nika Sharami – a 16-year-old girl who died during the protests – committed suicide… We feel very sorry for those who died, but we are all full of pain because many have been killed during these days, ”she says.

The pain has been compounded by reports that many families are pressured not to hold funerals or speak to the press in exchange for receiving the body of their loved one. The UN assured that it is "concerned by the information that the authorities move the wounded from hospitals to detention centers and refuse to hand over the bodies of those killed to their families if they do not accept the conditions."

The authorities have drawn attention to the fact that Iran's enemies seek to stoke the fire within the country, as General Salami recalled yesterday at the funeral. “The Americans, the British, the Zionists, the Saudis and their lying media who want to see our bright image obscured… if they have a bit of humanity and masculinity, they should see Shiraz from the sky. This is the real Shiraz,” said Salami, referring to thousands of people who attended the funeral.

The general was not only referring to Persian-language media operating from abroad – which broadcast the videos that official television does not broadcast – but also to another sector of the Shiraz population that has joined the protests. They are joined by thousands of Iranians abroad who have mobilized like never before. Last Saturday at least 80,000 gathered in Berlin and yesterday they again held demonstrations in many countries around the world.

The threat made yesterday by General Salami – which many fear will bring with it even greater repression – came after a long weekend of mobilizations that were reactivated last Wednesday, when tens of thousands of people reached the Saqez cemetery, in Kurdistan. Iranian, to remember Mahsa, Jina, Amini who had passed away for 40 days. That same day, multiple protests were held in different parts of Iran to remember the 22-year-old girl who died on September 16 after being captured by the morality police in Tehran. The indignation of her death was the trigger for the protests.

According to the Onege Hengaw, at least 14 people have been killed in Kurdish areas of Iran in the last two days. In Sistan Balochistan, another six people died on Friday during a day of protests to remember more than 35 people – Amnesty International speaks of 66 – murdered on September 30. Dozens have been arrested since then.

A joint statement published on Friday by the intelligence section of the Guardians of the Revolution and the Ministry of Intelligence also raised alarms about the repression that could intensify in the coming days. There they not only pointed to the same “enemy countries”, but also accused two well-known journalists of having been trained by the CIA. They were referring to Nilufar Hamedani and Elahe Mohammadi, two journalists who led the coverage of Amini's tragic outcome. Nilufar was the first to report from the hospital and Elahe reported from the cemetery in Saqez. Both are in prison and do not know their charges. This has led dozens of journalists to raise their voices in solidarity with their colleagues. Mehdi Rahmanian, director of the Sharq newspaper – one of the most important in the country and where Nilufar works – wrote a tweet in which he assures that reporting and publishing photos is the mission of a journalist. Dozens of personalities defended his integrity.