Damascus steel is the main hallmark of the new Big Bang Unico Gourmet. 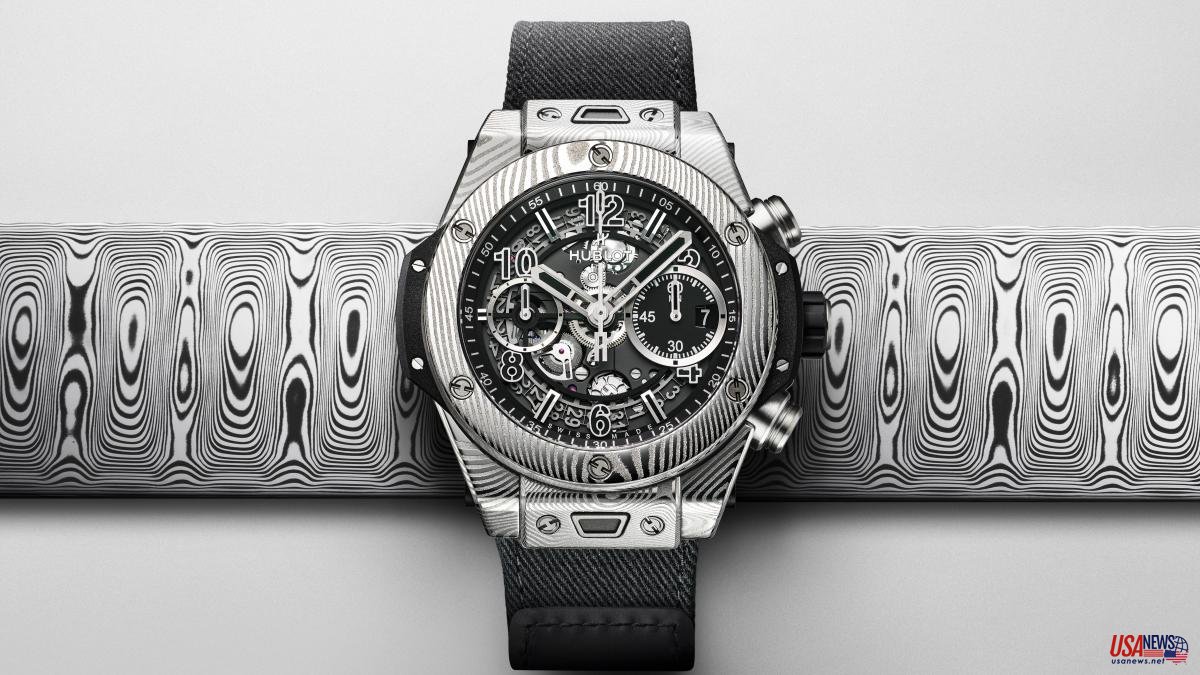 Damascus steel is the main hallmark of the new Big Bang Unico Gourmet. This iridescent-looking material with which the best knives are usually made has been incorporated into the new installment of Hublot's most emblematic family in a limited edition of 200 pieces that reaches the wrist carved from kitchen apron fabric with an opening facilitated by velcro.

All very gourmet. That is the reason why, to present it to society, the Hublot team convened four Michelin-starred chefs at a unique gastronomic meeting in Paris. The challenge: bring two of them together in the kitchen and let the fusion work its magic. In a four-handed menu, Anne-Sophie and Yannick Alléno fused two essential ingredients both in their kitchen and in the Hublot workshops: respect for raw materials and the search for innovation through taste. While Eneko Atxa and Paul Pairet had to be on the other side, that is, at the table, as brand ambassadors.

Swiss chef Andrea Caminada is also an ambassador of this very special watch (and owner of one of the 200 published). At the age of 26, he took charge of the kitchen at the historic Schloss Schauenstein castle restaurant in Fürstenau, in the canton of Grison (Switzerland), and at just 33 years of age he had already won some of the most important awards in the sector: three Michelin stars and 19 points in the GaultMillau. At 45 years old, he not only maintains this lofty level but has made it his mission to help young people who want to follow in his footsteps through his Fundazion Uccellin project.

"It would have been very good for me to have had similar help, so I am not going to deny it to those who come after me, it is a way not only to thank the luck I have had, but also to grow and improve the passion for gastronomy," he explained. the Swiss chef in mid-October before the charity dinner he held to promote his foundation. The challenge, which took place in his Schloss Schauenstein restaurant, with three Michelin stars and ranked 59th in The 50 Best 2021, also included the participation of Eneko Atxa and Quique Dacosta. So there were not three but nine stars that joined to promote his purpose.

Caminada, known and recognized for its avant-garde and for its obsession with local and seasonal products (which it usually picks from its own garden or from local producers), since its foundation has offered young talent the opportunity to work in renowned kitchens. , like Massimo Bottura's Osteria Francescana. Likewise, he invites scholarship holders from previous years to continue fighting to make this dream come true and give newcomers space to grow as he would have liked to live in his beginnings.

London-based Argentine artist Pablo Bronstein presented his new ephemeral work for Breguet at the Frieze Art Fair in London. His strong obsession with architecture and his particular vision of time define this new creation that, as happened in the New York and Seoul editions, will be destroyed for recycling.

“Our brand has always been close to the art world. Whether through our founder who created the neoclassical style that inspired modern watchmaking or through our craftsmen who, within our manufacture, perpetuate the ancestral know-how of decorating dials and movements. Forming a partnership with a fair like Frieze, which showcases the talents of today and tomorrow, is significant for Breguet. We are happy and proud of this association”, explained Lionel to Marca, CEO of Breguet before Bronstein's work.

Visitors to the exhibition had the opportunity to discover the art of the Breguet craftsman through a demonstration of guilloché, a tool used by the Manufacture's craftsmen to create the various decorations that appear on watch movements. A hallmark of the House, guilloché is a technique introduced around 1786 in watchmaking by Abraham-Louis Breguet. In addition to the aesthetic look that these decorations brought to the dials, the guilloche captured dust and allowed for better readability of the dial. Today, this decoration, which requires meticulous work, is still carried out in the traditional way, with the irreplaceable guilloché lathe, which is more than a century old in design.

Self-taught artist, draftsman, painter and architect, born in Patagonia, passionate about real moments and emotions, a reflection of the deepest feelings of those who are portrayed.

This is how Federico Ferreiro (@federico.ferreiro) is defined, an artist capable of making the most brilliant hyperreality with a pencil stroke or boli Bic.

In these pieces, the strength of architectural lines is combined with the purity of geometric shapes, which enriches Messika's offer, especially when it comes to work on colored gemstones such as turquoise, malachite, onyx and the aventurine.

From headpieces and belly chains to double rings worn off center, each piece hugs a different part of the body and is a statement of Messika's unique style.

Rick Owens' meteoric rise in the '90s coincided with a grunge revival for Dr. Martens: a decade defined by deconstructed wardrobes and attitudes. That spirit drives the collaboration between the two with the 1460 boot and the imposing 18-eye 1918 boot.

Greubel Forsey, the premium watchmaking brand, already has its space in Rabat, a benchmark in luxury jewelry in Spain. Launched in 2004 by Robert Greubel and Stephen Forsey, since its inception, it has been characterized by the development of inventions that have radically changed the world of haute horlogerie.

Antonio Calce, executive director, executive board member and shareholder of the company, who joined it in 2020 as a consultant to Robert Greube, explains that "precision and reliability, with unique designs for their excellence, assembled and finished by hand; original by nature, based on the principles of exclusivity, creativity and innovation; technical and aesthetic, forming a coherent whole; and made from savoir-faire" are the DNA of the brand.

One of the most fascinating novelties, which can already be seen in Rabat, is the “GMT Balancier Convexe”, a clock that puts the Earth back at the center of the universe. Replacing all previous GMT models, it features for the first time its characteristic tilted steering wheel, as if in orbit around the Earth.