The goals Paulo Dyabala and Chris Smalling served Mourinho's Roma, on their return to the Meazza, to recover from Dimarco's initial (1-2) and thus lengthen the crisis of play and results in which an opaque Inter is involved , without brilliance and who misses Lukaku in attack. 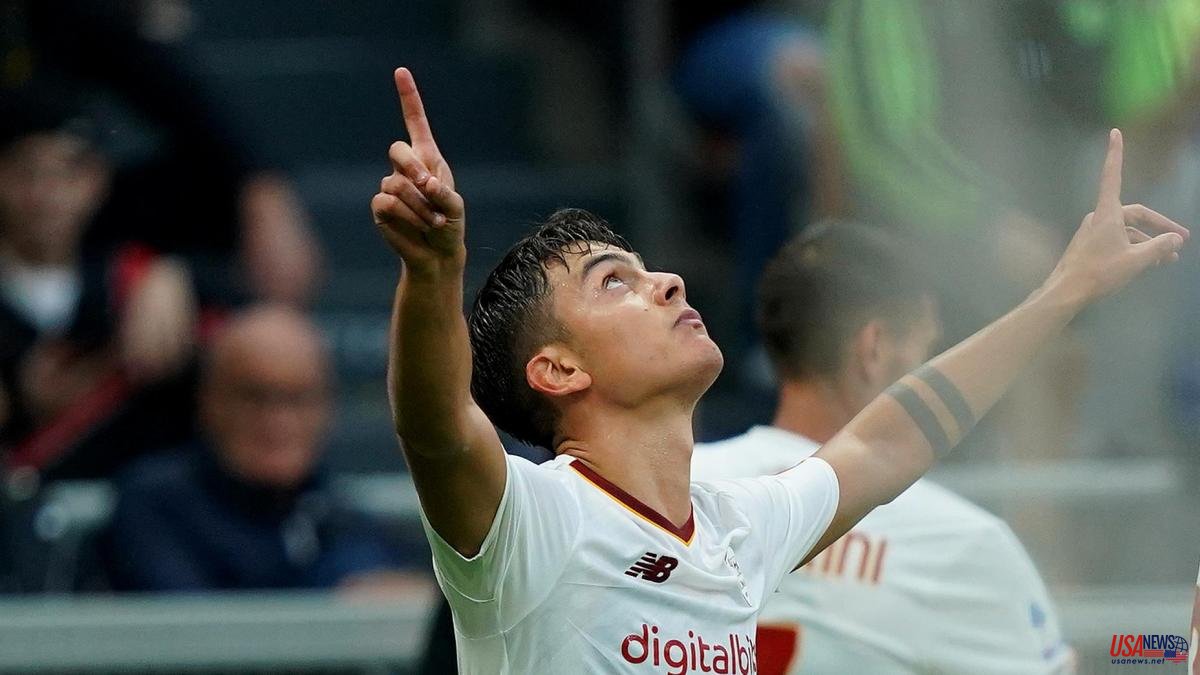 The goals Paulo Dyabala and Chris Smalling served Mourinho's Roma, on their return to the Meazza, to recover from Dimarco's initial (1-2) and thus lengthen the crisis of play and results in which an opaque Inter is involved , without brilliance and who misses Lukaku in attack.

Both teams arrived at the Giuseppe Meazza duel with doubts. Roma, sixth after their defeat against Atalanta, Inter one place lower after their defeat against Udinese. The first half, far from clearing doubts for some of the teams, increased them. Inter warned through Dzeko in the 10th minute with a goal that was eventually annulled for offside in a play that revealed a brutal lack of defensive forcefulness on the part of Roma, weak and indecisive in front of the own area.

The notice gave way to the awakening of Mourinho's men, sitting -due to suspension- in the stands of a stadium that he once owned, back in 2010, when he won the treble with the team that he plunged into his particular crisis tonight. The contest was equalized, which was left without a clear owner during the remaining time in the first half.

Individual actions were the only way to generate danger until, half an hour into the match, Inter connected. Barella, far from the level shown last season, perfectly interpreted the unchecking that Dimarco had thrown breaking inside, surprising Celik, and gave him the leather in a precise way so that the Italian continued with his sweet moment, the one that began with the Italian team last Monday in the match against Hungary and that was key for the pass to the 'final-four' of the Nations League.

Mourinho opted for the clash to maintain his double pivot with Matic and Cristante, sacrifice Abraham at the top and start a Dybala who arrived touched and had to be replaced after 60 minutes, again visibly sore.

The Portuguese coach played it. The 'Jewel' responded with the draw. Goal against a team that could have signed him in the summer, but did not decide. Spinazzola stole over Barella, raised his head and put a perfect ball from the left-handed profile to Dybala's boots, who signed a powerful chopped volley that bounced and complicated Handanovic's trajectory. The fight started again.

Inter came out better in the second act. He could, in fact, get ahead on the scoreboard on several occasions. The clearest, a shot to the crossbar by Calhanoglu, who keeps one of his best qualities in his right leg and on set pieces. The Turk invented a shot from the edge of the box that repelled the crossbar in the 63rd minute and encouraged the 'Nerazzurri' to go for the game.

Asllani, a newcomer to Inzaghi's eleven after Brozovic's withdrawal, tried from the edge of the field with a shot that narrowly missed. They were Inter's best minutes, with Lautaro very loose and getting the 'giallorossa' defense into trouble, who was loaded with cards because of 'Toro' Martínez.

However, when Inter was better off and Roma suffered the most, the Romanistas' saving goal came. Smalling came to the rescue in minute 75 with a header, a registered trademark, to a precise cross from Pellegrini, with which Handanovic could do nothing sold under the sticks.

The game ended in Milan. Rome breathed. Mourinho came out with three points from what was his home and is placed fourth waiting for what his neighbors from Lazio and Milan do, to whom he gives up the pressure. Inter remains seventh, out of European positions, at the mercy of what Juventus does.

Incidents: Match corresponding to the eighth day of Serie A, played at the Giuseppe Meazza stadium in Milan.