Tradition in Iran, marked by Shia Islam, indicates that on the fortieth day after the death, the mourning of the family, together with the community, gathers around the tomb of the loved one to pay homage to it, ends. 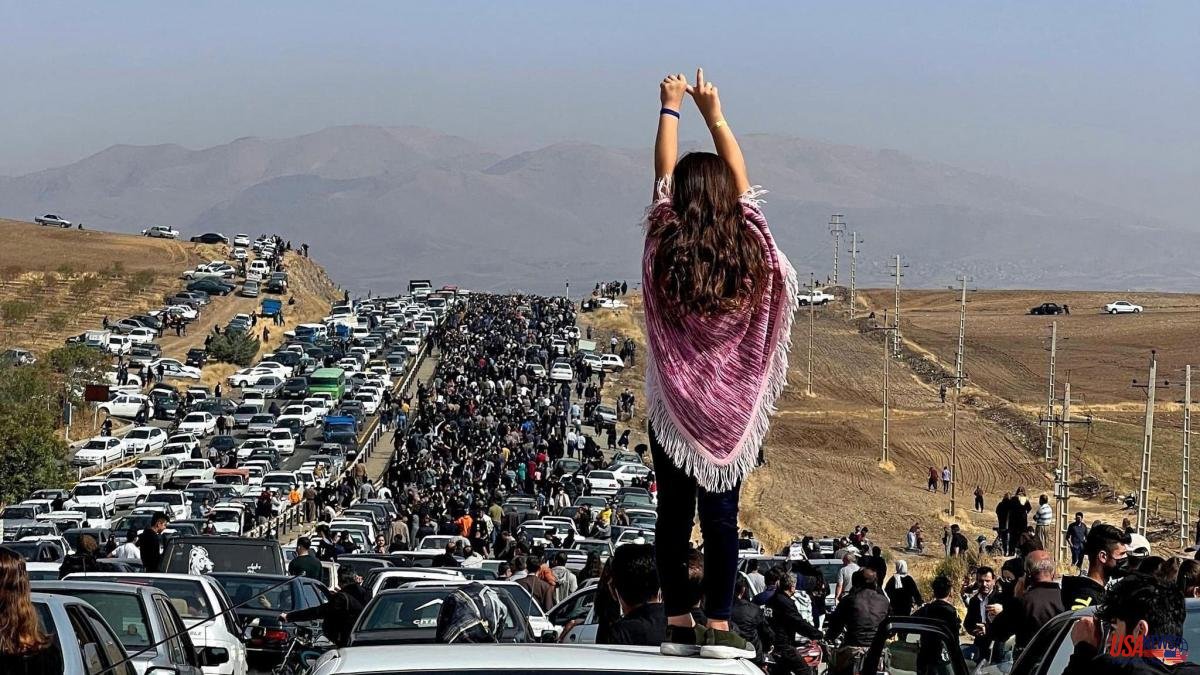 Tradition in Iran, marked by Shia Islam, indicates that on the fortieth day after the death, the mourning of the family, together with the community, gathers around the tomb of the loved one to pay homage to it, ends. as happened yesterday with Mahsa Amini. In this case, it was in the Kurdish city of Saqez, in the west of the country, where thousands of people, as could be seen in the videos broadcast on social networks, came to the cemetery despite the fact that the security forces blocked the roads. access from dawn.

Many crossed rivers, others crossed mountains and thousands more walked along the highway to reach the place where the 22-year-old Kurdish woman was buried hours after her death on September 16. Mahsa's tragic death, which occurred after she was detained by the morality police when she was visiting Tehran, sparked a wave of protests around the country that continues to this day. According to the Oslo-based NGO Iran Human Rights, 234 people have died since then, including 29 children. Other organizations estimate that at least 12,000 have been detained, a large number of them young.

"Death to the dictator", "Kurdistan, Kurdistan, the tomb of fascism", shouted thousands of cemetery attendees. According to witnesses, the security forces would end up opening fire on the attendees and dozens of people were arrested. The attacks would later spread to the city of Saqez, where the security forces ended up clashing with a sector of the population. In the videos you can see how an access bridge to the city was blocked by a burning police booth. Gunshot noises could also be heard. The NGO Hengaw, specializing in Kurdish issues, denounced that at least 50 people were injured yesterday in different cities of Iranian Kurdistan and denounced that in some cases they had used live ammunition. Protests both in Kurdistan and in many other cities continued into the night.

In recent days, some activists had denounced that Mahsa's parents had received pressure from the authorities to cancel this ceremony. Although they did not carry out any summons, the brother published on Tuesday a photo of the tomb covered by a red cloth that revealed the face of the deceased girl, today a symbol in Iran.

"Mahsa Amini", reads the graffiti left on dozens of walls in the main cities, which were also the scene of protests yesterday. In Tehran they began in the morning at some universities, where women without a veil – an image that has become more and more frequent in recent weeks – recalled the motto “woman, life, freedom”. In other venues, including the grand bazaar, chants of "freedom, freedom" were heard. Many of these protests ended with strong repression.

But it was in front of the Medical Association building that some of the most dramatic scenes were played out. There, a group of doctors were holding a peaceful protest when they were attacked by security forces. Witnesses assured that some agents shot and detained people who were nearby. At the end of the day the director of the Association, Dr. Mohammad Raz, resigned in protest at the brutality of the authorities. "It's disrespectful to the medical community," he said. Throughout the day there were also images of young people throwing desks and seats from the terrace of a building. In the lower part there were commandos of the security forces.

This day of protests was also marked by an attack considered to be a terrorist attack on the mausoleum of Shah Cheragh, in the city of Shiraz, one of the most important places of pilgrimage for the Shiite faithful in Iran. According to some official agencies, three men attacked the mosque, leaving at least 15 dead and 40 wounded. The official media claimed that the attackers acted as members of Sunni fundamentalist groups such as the Islamic State (IS) and Al Qaeda. Shortly after, IS claimed responsibility for the attack on Telegram.