In the midst of turmoil, Sri Lanka's opposition meets to form a new government 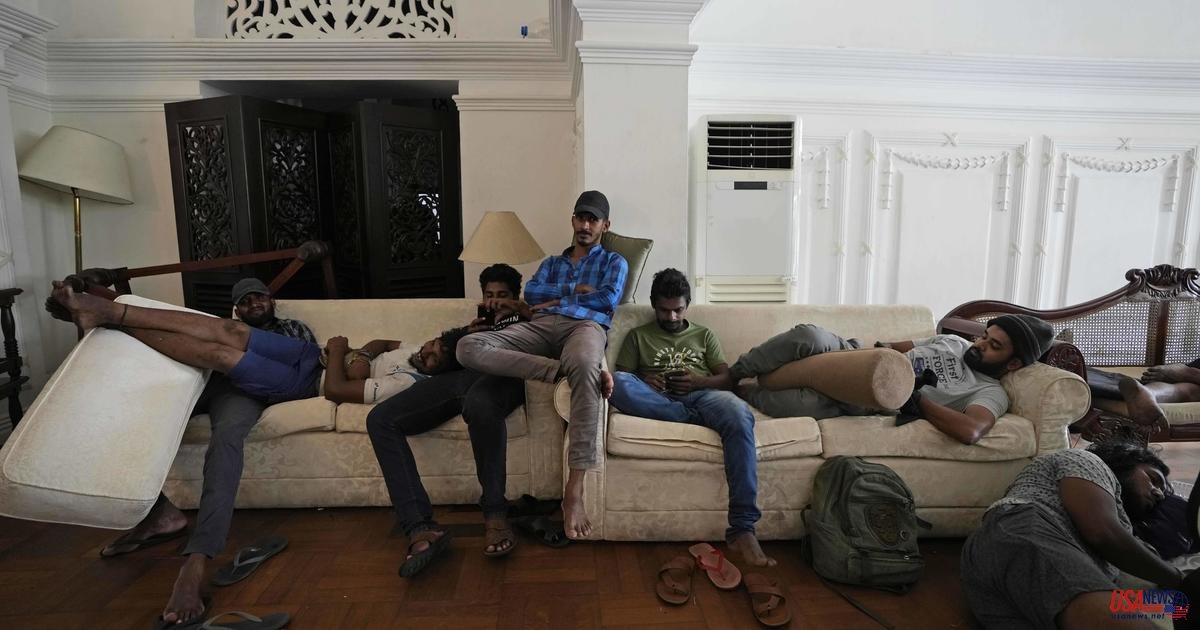 Colombo (Sri Lanka) -- Sunday's meeting of opposition parties in Sri Lanka was to discuss a new government. This came a day after the president and prime minister of Sri Lanka offered to resign. It was the most dramatic day in months of political turmoil in Sri Lanka. Protesters stormed their homes and set fire to one building in anger over the economic crisis.

Protesters continued to gather at President Gotabaya Rajapaksa’s residence, his seaside office, and the prime minister's house, declaring that they would remain until they resign. The city was surrounded by soldiers, and Shavendra Silva, Chief of Defense Staff, called for the support of the public to preserve law and order.

Ranjith Madduma, a senior official in the main opposition party United People's Force said that separate talks were held with other parties, lawmakers, and legislators who voted against Rajapaksa's coalition. More meetings are also planned. Although he expected an agreement to be in place by Sunday, he did not specify when it might be.

M. A. Sumanthiran (another opposition lawmaker) stated earlier that all the opposition parties could easily gather the 113 votes needed to form a majority in Parliament. They will then request Rajapaksa for the installation of a new government, and then resign.

Rajapaksa seemed to have evacuated his home before it was stormed. Mohan Samaranayake, a government spokesperson, said that he did not know any details about his movements. A statement by the president's office Sunday stated that Rajapaksa had ordered officials to immediately distribute a consignment of cooking gas. This suggested that he was still working.

Ranil Wickremesinghe, Prime Minister, said that he would leave office when a new government was in place. Hours later, the Speaker of Parliament announced that Rajapaksa would be stepping down on Wednesday. As the economic meltdown caused severe shortages of essential goods, people were left struggling to get food and fuel. This added pressure on both men.

According to the constitution, Speaker Mahinda Yapa Abueywardena will assume temporary presidency if both prime minister and president resign.

Rajapaksa named Wickremesinghe prime minister in May to address the economic crisis and promote economic recovery.

Wickremesinghe was part of critical talks with the International Monetary Fund, (IMF), for a bailout program. The World Food Program prepared for a possible food crisis by preparing for it. Before reaching an agreement, the government must submit to the IMF a plan for debt sustainability in August.

Analysts believe Wickremesinghe is the most capable leader. His government showed promise with the distribution of fertilizer to farmers for next year's cultivation, and the arrival of the first shipment of cooking gas orders in the country on Sunday.

Ranga Kalansooriya, a political analyst, said that this kind of unrest could cause confusion among international organisations like the IMF or the World Bank. She also suggested that the new administration should agree to a common plan for economic recovery.

He stated that Wickremesinghe was moving in the right direction but his administration was failing to implement a long-term strategy. Instead, it was focusing on solving daily problems.

It is unlikely that all parties will agree to IMF-backed economic reforms, even if they lose their political support.

Saturday's statement by Wickremesinghe was that he could not leave without a government.

Wickremesinghe stated that "Today, in this country, we have a fuel shortage, a food shortfall, and the head of World Food Program is coming here, and we have many matters to discuss with IMF." "There should be another government if the current government is gone."

On Saturday, thousands of protesters flooded into Colombo's capital city and invaded Rajapaksa’s fortified residence. Many people swam in the garden pool and sat on the beds, taking photos with their smartphones. While some made tea, used the gym, others demanded that the president or prime minister leave.

Wickremesinghe, Abeywardena and the parliament speaker said they had spoken to the president in their speeches, but they didn't say anything about whereabouts.

Wickremesinghe's office stated that protesters broke into the private residence of the prime minister and set it ablaze. It was not clear if Wickremesinghe was present at the time of the invasion.

Blinken spoke at a Bangkok news conference and stated that the United States condemned attacks on peaceful protestors, while calling for an investigation into all incidents related to protest violence.

As leaders attempt to negotiate a rescue deal with the IMF, Sri Lanka is dependent on assistance from India and other countries. Wickremesinghe stated recently that negotiations to the IMF were difficult because Sri Lanka is now bankrupt.

In April, Sri Lanka announced that it would suspend repayments of foreign loans because of a shortage in foreign currency. The country's foreign debt totals $51 billion. It must repay $28 million by 2027.

Months of protests have almost dismantled Rajapaksa's political dynasty. This ruling family has ruled Sri Lanka for the last two decades, but has been accused by protesters and others of corruption and mismanagement. After violent protests, the president's elder brother was forced to resign as prime minister and sought safety at a naval base. Later, he moved into a Colombo house.