The leader of the opposition in Catalonia, Salvador Illa, has slammed the door on the proposal on the "clarity agreement" that President Pere Aragonès has raised in his initial speech in the general policy debate taking place in Parliament. 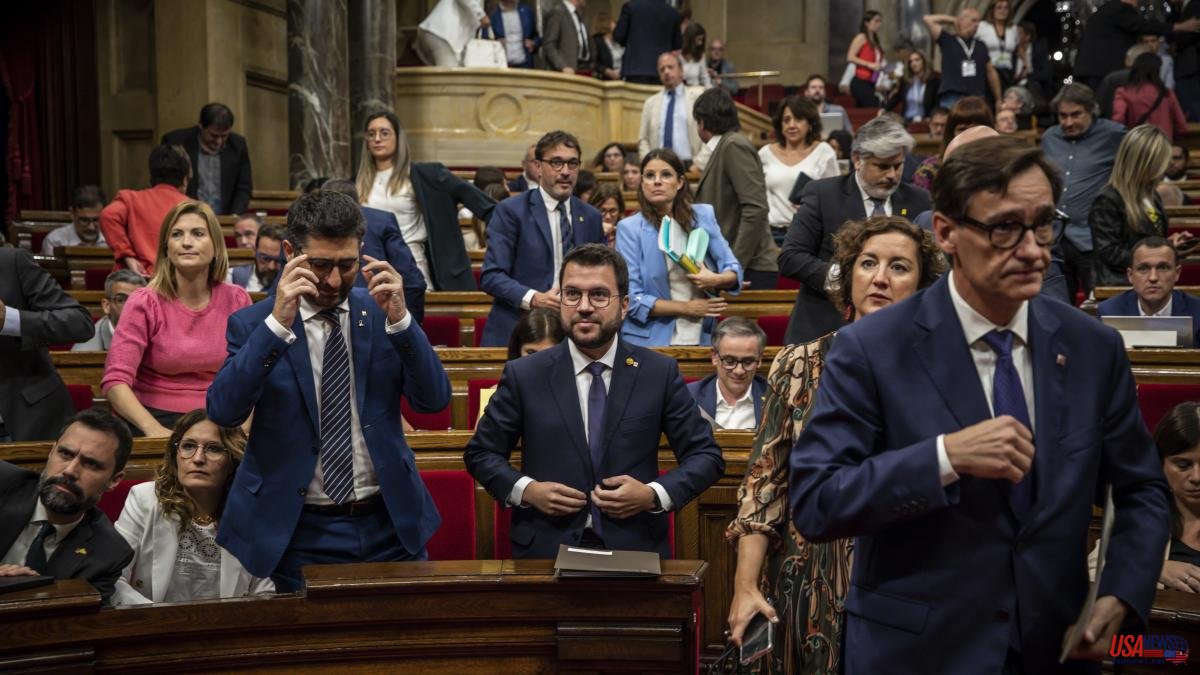 The leader of the opposition in Catalonia, Salvador Illa, has slammed the door on the proposal on the "clarity agreement" that President Pere Aragonès has raised in his initial speech in the general policy debate taking place in Parliament. Illa has dedicated no more than a few sentences to rejecting the president's plan: “I don't agree. It doesn't solve anything. It is a déjà-vu”, he said, after which he reiterated the advisability and predisposition for Catalonia to vote on “agreements, not divisions”.

Illa has practically turned a deaf ear to the president's proposal, who reminded her in the reply that Miquel Iceta defended her in 2016 when the PP governed in Spain. Faced with Aragonès's approach, the leader of the PSC has asked him to think "how to expand and how to improve the powers of the Statute", and has once again called for a dialogue within Catalonia, that is, the table of Catalan parties that Quim launched Torra but only held a couple of meetings.

Illa has admitted that there is a political conflict between Catalonia and Spain, but has assured that the solution "will not be found in the proposal that you have made here". And in reply to the president's words assuring that 73% of PSC voters endorse this proposal, the socialist leader has contradicted him, assuring that "PSC voters want to vote for an agreement, not a rupture."

The socialist leader did not want to delve into Aragonès's announcement because, in his opinion, the place where the issue has to be addressed is the dialogue table with the central government. Before this dialogue, the socialist has pointed out the need to work "consensus". In this sense, Illa has demanded that Aragonès redouble "the efforts to help put things on track" because "this is done in another way, of course not coming here to say that I have the magic formula", he has rejected.

Instead, he has placed special emphasis on the need to "promote without nuance" a "useful" policy in Catalonia, "fleeing unaffordable promises" and with respect for institutions, citizens, and opponents. "It is credible politics, because it begins with self-demand, which points out possible horizons and explains how to achieve them", he pointed out, in contrast to Aragonès' approach to self-determination.

Illa has pointed in this direction as a consequence of the economic and social context, after the outbreak of the pandemic and with a war in Eastern Europe, which is "changing the world and our lives," she said. In this context, the socialist has judged the aid plan insufficient in the face of the increase in inflation, valued at 300 million euros, which the president has announced in this debate. Even so, Illa has assured that he would support it, but since he frankly sees it as improvable, he will also send a battery of proposals to the president.

But beyond the measures announced by the president, for the leader of the PSC "this is not going, the Government does not govern". In his opinion, the Government "is a broken toy", so that "it has and can be done better",

But the truth is that the Government, according to Illa, "drags its feet" and is stuck in "a chronic conflict incapable of solving problems." Thus, the work of government "is very scarce, one of the scarcest since the recovery of self-government", pointed out the socialist leader, who has given as an example the "minimum" power of renewable energy installed" in recent years, of which has lamented that “we are at the tail of Europe”, at levels comparable to Ceuta and Melilla, Hungary and Poland.” He has also given as an example the lack of VT places and the problems in the field of citizen security.

Illa has once again shown her predisposition to reach more agreements with the Government, such as those reached to renew the positions that depend on the Parliament or the law on Catalan, and has proposed four agreements to be reached in the next period of sessions : a social pact, in infrastructures (in airport, railway, port and energy matters). And an agreement to approve three laws, the electoral law, the forest law and the Catalan police law for which he urges you to "choose between the CUP and us."

When it was En Comú Podem's turn, the president of the parliamentary group, Jéssica Albiach, also coldly welcomed the Aragonès clarity agreement proposal, recalling that she herself defended it five years ago but then, the Government chaired by Quim Torra, he dismissed it as a "past screen".

In his speech, Albiach "welcomed" Aragonès to the proposal that he criticized the ways in which the president presented it, "at the stroke of an announcement and without previously discussing it with the rest of the parties." Instead of "governing from the lectern", the leader has advised her to clarify first if this proposal is shared by her government partner because "it is not me who has to be convinced".

Faced with these foreseeable differences, Albiach has warned the head of the Government that "we will not play blue helmets for independence", so that if this proposal "is seen as an effective tool", he will be able to count on his complicity, but if it is to feed debates sterile and kick the ball forward, no".

The leader of the commons in the Parliament has also made a fiery criticism of the little government work of the Catalan Executive. "They have only approved one law, that of budgets, with us", she has recalled, something that she has attributed to the constant fights between the partners. According to the leader, the Government "does not have a direction", "the work does not spread and they are not transforming Catalonia", and "it is the most normal thing in the world because in the end, after so many fights they have very little time left to govern", has finished Albiach.

Albiach has urged Aragonès to bet on a "progressive solution" to the inflation crisis "so that the usual people don't pay for it", he said. And at this point he has set as a red line to approve the next budgets to maintain the wealth tax in Catalonia, to which he has attached a series of proposals aimed at undertaking the energy transition. As a star proposal, Albiach has once again put on the table the massive plan to install solar panels in buildings in Catalonia so that by 2030 100% of the energy consumed in Catalonia is produced in Catalonia

The president of Ciudadanos en el Parlament, Carlos Carrizosa, began his speech by thanking Pere Aragonès for the "game" he has given in the debate and the "courage" to reply one by one to the opposition spokesmen. And he has immediately moved on to economic issues, the main concern of citizens, as he has highlighted, which requires its public managers to maintain and consolidate the welfare state. "We are in a context of a serious global crisis that affects companies and families, and we must apply the appropriate recipes for growth," argued Carrizosa, who lamented that the Government is leading a "breakthrough project" that divides, in his opinion , to the Catalan society.

After ruling out the possibility of a Clarity law similar to the Canadian one being established in Spain - "we do not pay attention to these inventions at all", he has sentenced -, Carrizosa has referred to the current inflationary environment and has proposed the solutions that Ciudadanos defends , designed, he said, so that "the direction of the Catalan economy is correct". In the first place, he has proposed an audit of the Generalitat to lower its cost and has broken down a series of organizations that he considers to be over-funded or directly superfluous. As a second measure, he has proposed "loosening taxation" by acting on the regional section of personal income tax, "which has the highest rate for the middle and working classes." And thirdly, he has defended the creation of a "favorable environment" for the self-employed and companies, with a "shock plan" that allows the return of the companies that left Catalonia at the height of the procés.

For his part, the president of the Catalan PP, Alejandro Fernández, has raised his speech around three axes: first, the analysis of the political situation in Catalonia; second, the economic and social question, and, thirdly, the proactive part, with the measures that the popular propose to overcome the crisis. Fernández has also ruled out the application of a Clarity law like the Canadian one in Catalonia and has accused Aragonès of “finishing” 1-O “after five years of fooling citizens”. "Today he tells us that that was a rehearsal and now it's time for the real thing", the leader of the popular Catalans has ironized about the proposal put forward today by the president of the Generalitat to negotiate with the Government of Spain the celebration of a new referendum.

On the economic side, the Catalan PP follows the postulates of Isabel Díaz Ayuso and Juan Manuel Moreno Bonilla in Madrid and Andalusia and, to the generalized tax reduction, shared with Ciudadanos, adds the repeal of the wealth tax, a measure that those of Carrizosa they have not raised. For Fernández, the current inflation crisis can only be resolved with innovation and economic reactivation, so that Catalonia, instead of being an industrial society as in the past, does not end up becoming, as is beginning to happen, in the opinion of the PP leader Catalan, in a rentier economy. "We will not be able to recover more investments and grow with discourses of tourism phobia and calling businessmen and entrepreneurs exploiters," said Fernández, who lamented the "culture of no to everything" that, in his opinion, characterizes Catalan politics.