Illa raises the tone against the Minister of the Interior: "Mr. Elena, to your house"

The leader of the opposition in Catalonia, Salvador Illa, has targeted the Minister of the Interior, Joan Ignasi Elena, for his political management of the Mossos d'Esquadra and insists on demanding, without success, his resignation or that President Pere Aragonès ceased it. 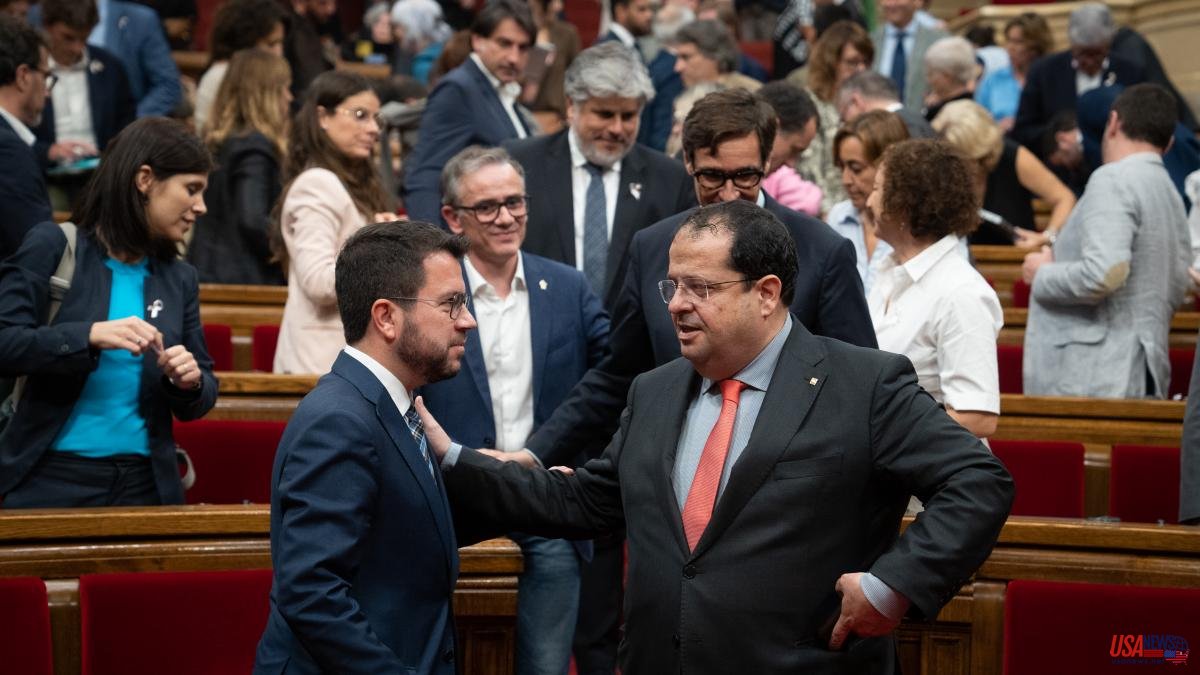 The leader of the opposition in Catalonia, Salvador Illa, has targeted the Minister of the Interior, Joan Ignasi Elena, for his political management of the Mossos d'Esquadra and insists on demanding, without success, his resignation or that President Pere Aragonès ceased it. Illa has asked for it again this Wednesday, raising the tone against the leader for a new controversy around the Department, the blockade by the ministry of several projects of the Guàrdia Urbana de Barcelona.

Speaking to the press from Verdú (Urgell) after visiting the Segarra-Garrigues channel, Illa has been incisive with Elena's management at the head of the Interior to finally demand that "Mr. Elena, go home". "Instead of solving problems -the minister- is creating them day by day and, therefore, he must go home, and if he does not resign, the Aragonese president must dismiss him without waiting another minute," the PSC leader has claimed. .

Illa has justified her demand in the fact that "to date we still do not have an explanation of why she blocked for months" the signing of an agreement with the Guàrdia Urbana de Barcelona. The socialist was referring to the information that indicates that the ministry has not yet authorized the municipal body to access the fingerprint database for the recognition of certain criminals, the SAID, despite the fact that the Secretary of State for Security authorized it last month of March. The only thing missing is the signature of the director of the Mossos, Pere Ferrer.

To this fact, publicly denounced by the Deputy Mayor for Security of the Barcelona City Council, Albert Batlle, is added the complaint of "political interference" and "purge of the Mossos d'Esquadra", made by Illa's party as a result of the dismissal of the chief commissioner of the body, Josep Maria Estela, due to his disagreements with the minister.

The cocktail of controversies around the Minister makes the Socialists pursue his departure from the Government, but aware that it will be practically impossible, they seek at least his parliamentary disapproval. Although a failure does not entail any legal consequences, it is a political setback for the Minister and for the Government.

His reprobation would be the first of Aragonès's cabinet, both from the stage in coalition with Junts and now alone. Although he tried with the Minister of Education, Josep González Cambray, the PSC avoided him up to three times. The closest the Government has been to a reprobation has been due to the management of renewable energy by the Ministry of Climate Action, Food and Rural Agenda, which is headed by Teresa Jordà. Just a few weeks ago, the plenary session of the Parliament approved a resolution in which it was noted "the failure" of his management.

But failing the Minister of the Interior is not failing any Minister. To achieve this, the Socialists want to have the involvement of Junts, now that they are in opposition, but the postconvergents have not lent themselves to date. Both parties have maintained contacts to this effect, but Junts chose to settle the controversy over the police leadership "without bloodshed".

Postconvergent sources point out that for now they want to adopt a "responsible" position, recalling that they have been at the head of the Ministry for many years. But they also recognize that Elena would well deserve the disapproval for her management.

The PSC would like to promote it, but other interests also intersect that hold back that will, such as agreeing on the Generalitat's budgets. Aware that Junts is not for the job as it seems that the common people are not, the Socialists do not want to carry it out with little more than the votes of Vox.

In fact, the PSC raises the flag of order in terms of security as opposed to the route that the extreme right takes with this matter in Catalonia, and that attacks the work that socialist mayors do from the city councils of the metropolitan area. Illa's party is fixated on this issue to retain the temptation of its voters to flee to Vox, especially in the face of next spring's municipal elections.