Iggy Pop, the guts of a classic

Iggy Pop is one of the undisputed icons of rock, and even more so after the death of his friends Lou Reed and David Bowie. 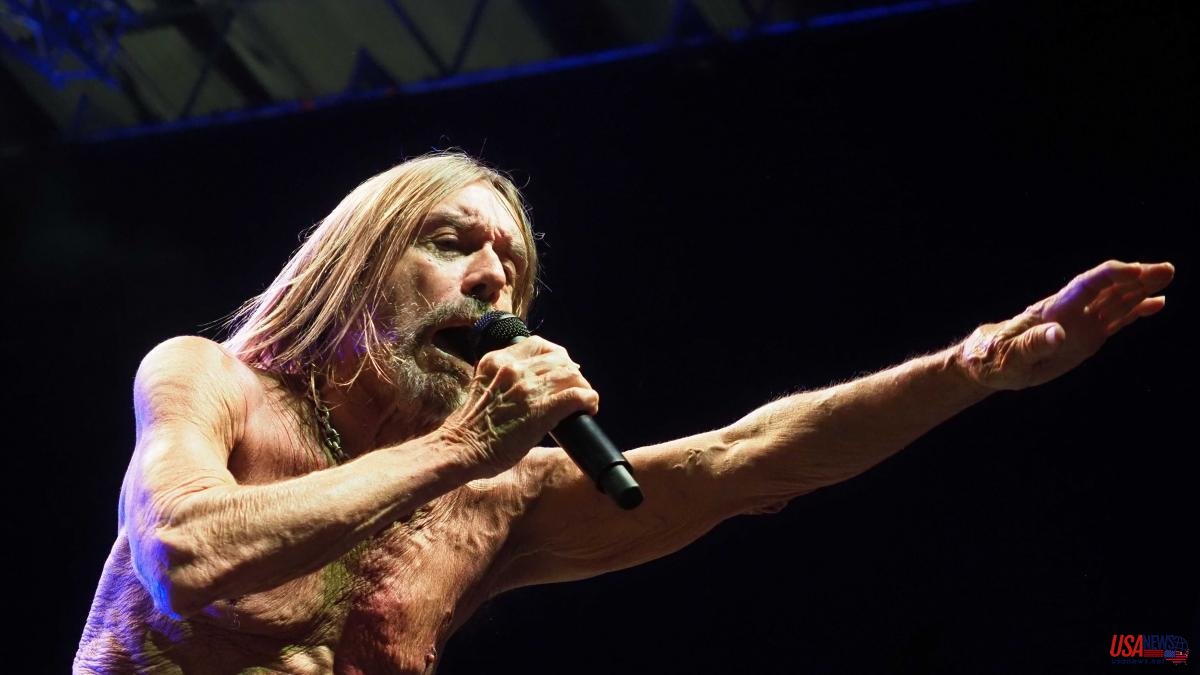 Iggy Pop is one of the undisputed icons of rock, and even more so after the death of his friends Lou Reed and David Bowie. And besides, as much as he has been punishing himself for more than half a century of convulsive career, he is still in perfect shape at 75 years of age. He demonstrates it in the presentation tour of his latest album, Free (2019), jazzy and experimental, the eighteenth of his solo career.

He does so accompanied by a peculiar and oiled group, led by guitarist Sarah Lipstate Noveller, which includes a wind section with Corey King (trombone) and Leron Thomas (trumpet); it is completed by Florian Pellissier (keyboards), Grégoire Fauque (guitar), Sylvian Ruby (bass) and Thibaur Brandalise (drums). It is the first time that La Iguana de Detroit performs with a band that goes beyond the strict rock canon.

After triumphing and receiving unbeatable reviews in his screenings at the Jazzaldia festival in San Sebastian and the Teatro Real in Madrid, he arrived at the Guíxols Arena in Sant Feliu de Guíxols to present an assorted repertoire that alternates songs from the latest album with unappealable classics from his age of Gold as frontman for The Stooges and from his solo discography. And although he starts the concert dressed in a suit, he is soon bare-chested. Despite having wrinkled skin marked by the scars of time, he still continues to transmit the rebellious rage of what was an icon of the wildest rock. From a punk with a suicidal mentality, he has become an older man who flirts with swing and the experimental, but always maintaining the dignity of someone who knows that he is due to his myth and who, at the same time, allows himself the luxury of getting involved in others. recordings, from which he comes out very successful, and even more so if we take into account that his personal voice remains unscathed. Over time he has acquired a hoarse and serious tone that gives grain and depth to some songs that are authentic landmarks of the most iconoclastic rock.

With the current arrangements, T.V. eye, Death trip, Gimme danger, I'm sick of you, I wanna be your dog, Fun house and Search and destroy reach a new brilliance, without detracting from the greatness of songs that once put rock in danger. And some of the new ones, like Loves missing, with his cavernous voice, take us back to the sinister rock era. They also premiere James Bond, which sounds like the groove of an action movie soundtrack. As far as the title track, Free, is concerned, it's an ambient digression to Jon Hassell's Fourth World.

Other culminating moments of the concert are when he recovers his great classics, beginning with the immortal Lust for life, a song that gives title to a fundamental album from 1977, and the most commercial and successful song of his career The pass enger.

In the first bars of the concert, he also rescues songs from the seminal New values, such as Five foot one and The endless sea, and later from The idiot, the very powerful Sister midnight, to the rhythm of funk, and Mass production, with the distorted trumpet and the synthesizers as protagonists. Iggy renews himself to never stop being himself, in a chameleonic transformation that shows the guts of a great rock classic.