The Reykjanes Peninsula, in southwestern Iceland, is the scene of a new volcanic eruption, just ten months after the last one. 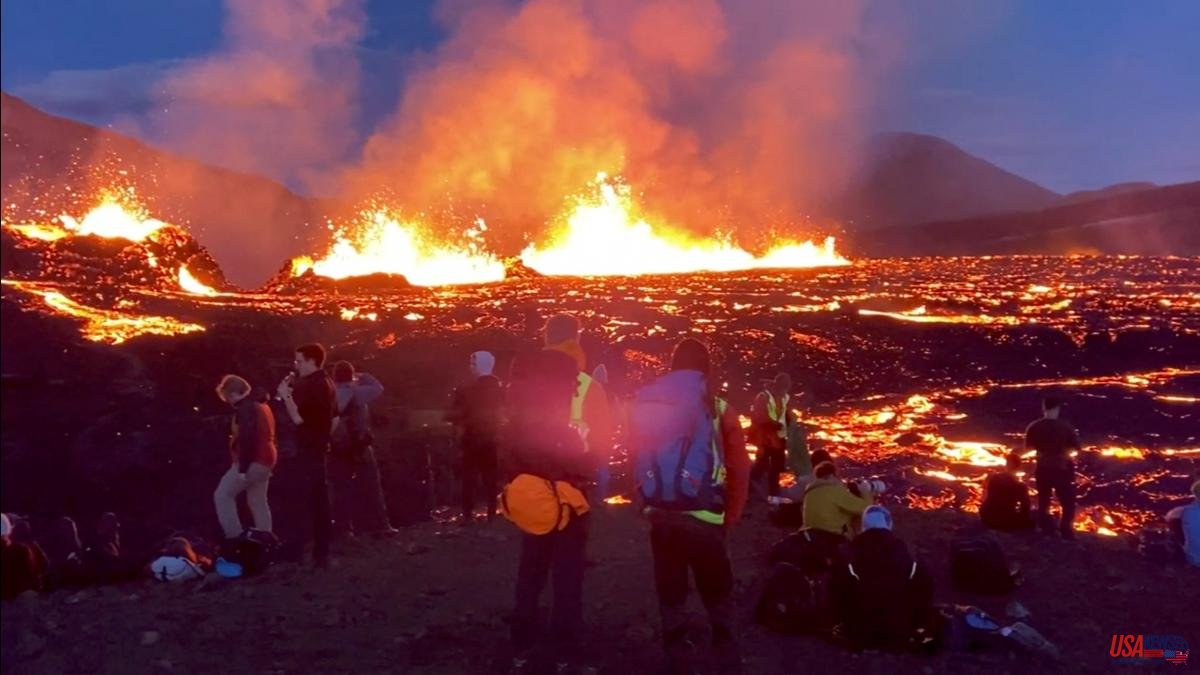 The Reykjanes Peninsula, in southwestern Iceland, is the scene of a new volcanic eruption, just ten months after the last one. This Wednesday, at a quarter past one in the afternoon, the magma reached the surface, in the north of the Meradalir valley, producing a 400 meter long fissure that in the first days of activity has emitted between 20 and 50 cubic meters of wash per second. According to data from the Icelandic Meteorological Office, an agency that is also responsible for monitoring the island's seismic and volcanic activity, the eruption generates between five and ten times more volume of lava per second than the one that began on March 19, 2021.

The smoke from the volcano is clearly visible from the capital, Reykjavík, which is about 25 kilometers from Meradalir. For now, there has been no impact on air traffic and the Keflavík international airport, 15 kilometers from the eruption, is operating normally. One of the main concerns of the Icelandic authorities is the emission of sulfur dioxide, which can reach levels dangerous to health. Citizens can check the air quality on a public service website in order to avoid areas with too much presence of polluting gases. So far, it has not been necessary to order any confinement.

“It is a rather small eruption, it is a lava flow that does not produce ash, but it is emitting gases. Since the end of last year's eruption we have observed an accumulation of magma fifteen kilometers deep, at the threshold between the mantle and the earth's crust, which has generated a swelling of the land and, ultimately, the current eruption," explains Ásta Rut Hjartardóttir, a research specialist at the Institute of Geosciences at the University of Iceland. The eruption has been received with optimism by experts and the local population, because at this point the lava tongue does not seem to endanger any critical infrastructure or the nearest municipality, Grindavík, with three thousand people.

The other good news is the significant decrease in the number and magnitude of earthquakes that have preceded the onset of volcanic activity. Last Sunday the strongest shock occurred, with a magnitude 5.5 earthquake, and this Tuesday 2,700 earthquakes were recorded in 24 hours. When the magma finally reaches the surface, like popping the cap off a soda bottle, the magma has somewhere to go. The pressure is reduced to the dike, so that it stops elongating and swelling, eliminating most of the forces that generate earthquakes”, details Dr. Tom Winder, associate researcher and member of the Volcanic Seismology Group at the University of Cambridge.

Although the authorities have advised against visiting the affected area until the new route has been worked on, as of August 3, the emergency system detected 8,000 mobile phones, half of which were from foreign telephone lines. All persons accessing the eruption site receive a warning message, although the Meradalir Valley is open to visitor traffic at all times.

One of the first mountaineers to visit the place was Muhammed Emin Kizilkaya, a Reykjavik City Council worker who is fond of geology and extreme natural phenomena. “To get to the area of ​​the new eruption you have to go very well prepared, because it is a complicated route. I'd say it's twice as difficult as last year's volcano view trail. You have to walk through unstable terrain, lava fields covered with moss and with many holes”, explains Kizilkaya.

Scientists working in situ and who have studied the eruptive history of the Reykjanes Peninsula think that these two very continuous eruptions in the region may be the beginning of a volcanic era that could last decades or even centuries. The last precedent is the period from the 10th to the 13th century in which the peninsula experienced three centuries of great volcanic activity.

The fact that the international airport is located on the southwestern tip of this peninsula worries experts. “There is talk of the possibility that in the future the lava could cut off both highways at the same time, both the north and the south of the peninsula, isolating the airport. Alternative airports must be prepared; we have airports in Akureyri and in Egilsstaðir, so they have to be prepared”, emphasizes Hjartardóttir about one of the scenarios that most worries local authorities due to the negative economic impact it could have.