Several hundred people have gathered this Thursday at the Faculty of Law of Granada to try to prevent a conference that Macarena Olona, ​​who was Vox's candidate for the presidency of the Board, has offered this afternoon at the university. 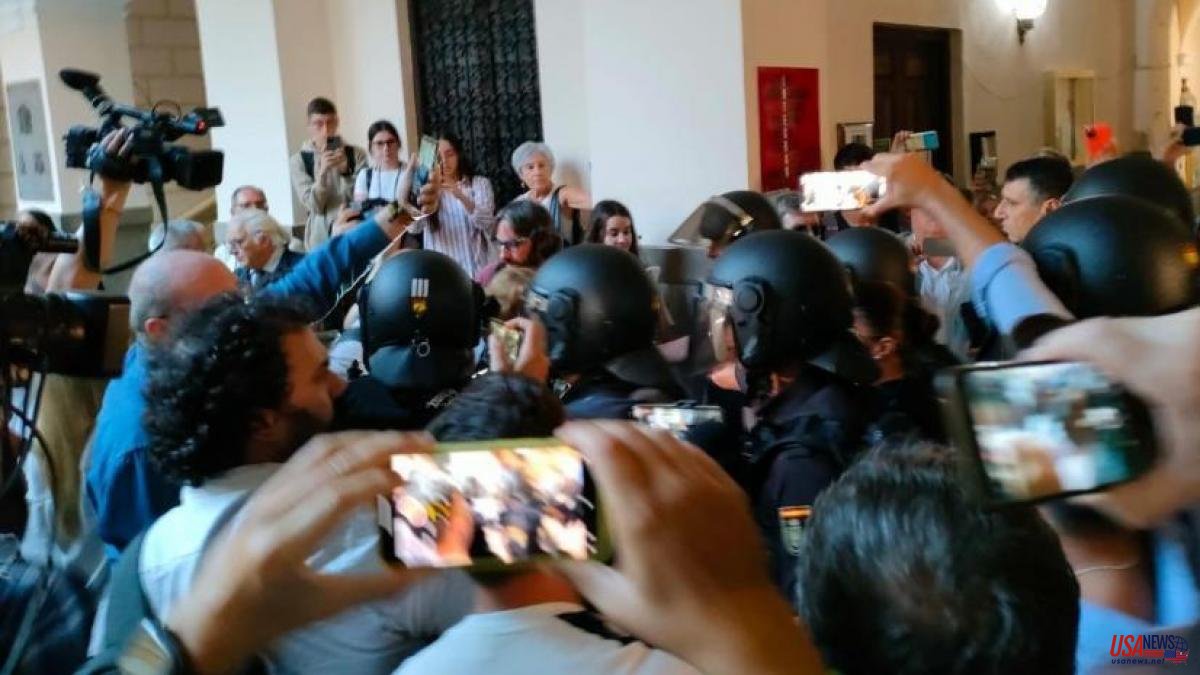 Several hundred people have gathered this Thursday at the Faculty of Law of Granada to try to prevent a conference that Macarena Olona, ​​who was Vox's candidate for the presidency of the Board, has offered this afternoon at the university.

The Student Union Union and other left-wing groups had called this protest against the conference, which has brought together both opponents and supporters of Olona.

At the gates of the Paraninfo de Derecho there have been some struggles between the concentrated, who from one side and the other have shouted slogans both against fascism and against communism.

Olona has been escorted by the National Police upon her arrival at the Plaza de la Universidad, where, according to police sources, around a thousand people have finally gathered.

Despite the difficulties in accessing the place that was hosting the conference, Olona has finally managed to enter the Paraninfo, inside which she has been received with applause.

Organized by the Forum for Civil Concord in the Paraninfo de Derecho, with the collaboration of the faculty, this conference by the State attorney has been entitled "The defense of rights and freedoms through the Constitutional Court: the unconstitutionality of alarm states.

The organizers of the protest have framed the concentration in the fundamental right of assembly and demonstration against what they consider Olona represents: "The political organization of reactionary and deeply discriminatory ideas such as racism, LGTBI phobia, machismo, denialism and vindication of a dictatorship that causes millions of deaths without justice or any reparation", they have indicated in a manifesto.

The Student Union Union, together with other organizations and groups such as the Andalusian Workers' Union (SAT), CGT, CNT, Ustea or Izquierda Anticapitalista, has also denounced the "attitude" of the University of Granada towards the organization of talks that it considers " purely reactionary ideology".

"The university, as a center of knowledge and knowledge, must cease its attitude of behaving like a company when it comes to giving up its spaces," indicated the organizers of the protest, who have rejected the publications on social networks that they had implied that this afternoon's mobilization represented a "confrontation between radicals".

"Our interest is to show the massive rejection of discriminatory ideas and practices having a place in the university for the simple fact that they can pay some fees. We want the ideology of the extreme right to be completely outside the University", they have insisted.

Hours before the conference, Olona, ​​who is taking up a series of legal conferences at different universities with the one in Granada, had indicated via Twitter that around twenty organizations had joined the "escrache" in Granada and that, although he would attend "alone", she felt "very accompanied".

Olona, ​​who did not achieve the expected results nor managed to enter the Andalusian Government and went into opposition in the Autonomous Chamber, announced at the end of July that he was leaving politics for health reasons.