How far does Nadal go?

On Sunday, as the night spread over Paris, Rafael Nadal (35) launched unthinkable messages in another time. 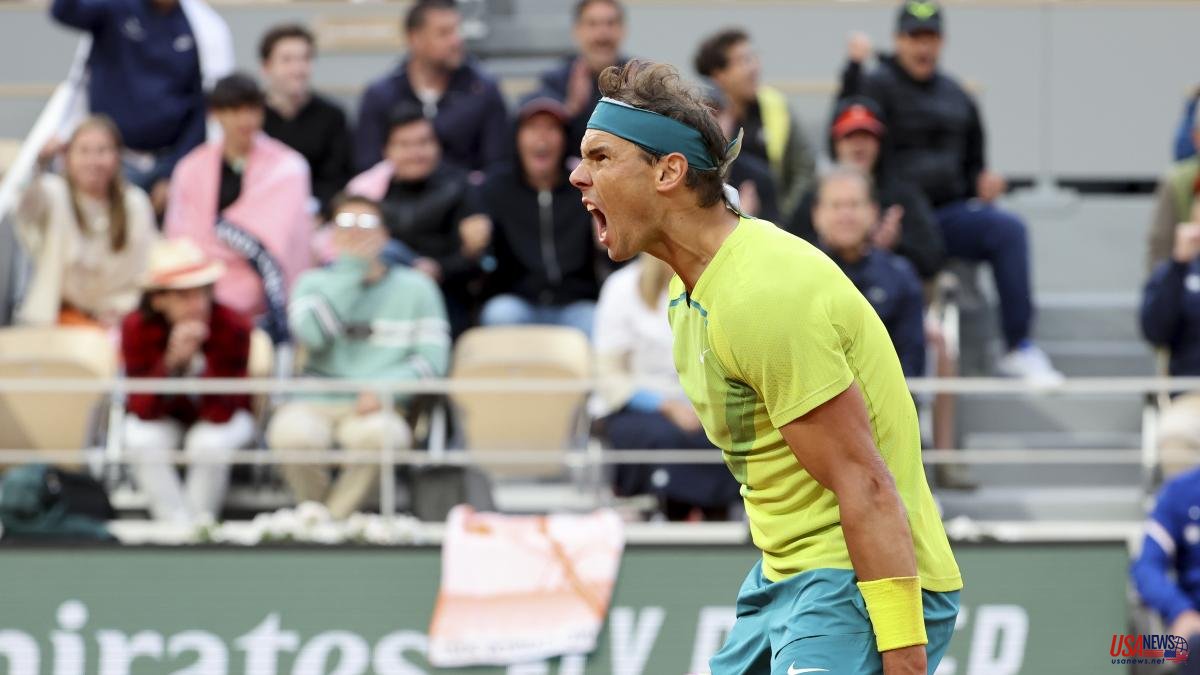 On Sunday, as the night spread over Paris, Rafael Nadal (35) launched unthinkable messages in another time.

Sitting before a wide range of international journalists, the Balearic repeated and repeated himself, and it seemed that he was talking to himself:

-I don't know if my quarterfinal match against Novak Djokovic (this Tuesday) will be my last match in Paris. I don't know where I'll be in a year...

And he said it so much, and he thought about it so much, that the message was penetrating among the parish.

So the chroniclers, disconcerted, exchanged glances while the phenomenon spoke, and in a low voice we wondered:

-But what is Rafael Nadal telling us?

And so it is: he was telling us that nothing is eternal.

And neither does he.

Turning this idea around, yesterday the chronicler went to peek at gate 1 of the Roland Garros venue, and there he set out to contemplate the steel sculpture 5.40 m wide, 2.60 m high and 1.5 m in the background that the sculptor Jordi Díez has dedicated to Nadal.

There were more curious people: dozens of visitors formed glue to portray themselves next to the work.

They posed with the selfie stick, or admiring the statue, a unique fact in current sport since no other active tennis player wears a monument with his name in any of the great temples of tennis.

If you ask Nadal, the man prefers to sidestep those issues:

"Everyone describes you as the king of clay," a British journalist asked him.

The Balearic raised an eyebrow, he always does when a question makes him uncomfortable:

"No one calls me that. Neither in my family nor in my closest environment. And I certainly don't feel that way. It's true, I've accomplished more than anyone on this surface, but I don't need to be called the king of anything.

– And how do you get to your quarterfinal match against Novak Djokovic?

-Djokovic demands a lot and I don't arrive in an ideal situation. I keep the illusion, although I think that now, like in 2015, it is one of the only times in which he arrives as a favorite. Given our evolutions, you have to understand: he is better than me. Although in sport anything can happen and I am ready to fight from now on.

This is another unthinkable message in another time: like it or not, Nadal is the king of clay.

What happens is that its drift has become rarefied in recent months. They are the consequences of his foot problems, Müller-Weiss syndrome, a degenerative problem that he has been dragging along throughout his career and that has ended up breaking the scaphoid in his left foot.

-I can not complain. I'm in the quarterfinals of Roland Garros when two weeks ago I didn't even know if I would come, she said.

And therein lies the crux.

Nobody knows how much life Nadal has left.

If you ask Novak Djokovic, his rival on Tuesday night, the Serbian chooses to praise Nadal:

-If there is a complicated commitment in the world of sport, that is to defeat Nadal at Roland Garros -he said.

We do not know if he is sincere.

We refer to the most recent statistics: last year, in this same scenario, in the semifinals, the Serb knocked down the Balearic (they are 30-28 for Djokovic in the face-to-face).

-And the worst of all -added Nadal-, is that we still play at night (in the already famous and criticized night time slot, the formula that the tournament launched last year to make double cash in the sale of seats). And I do not like that. I prefer to play during the day. I know Roland Garros like this, and that is how I have played throughout my career.

And with that veiled protest, Nadal opened a new debate:

-I am aware that it may be my last game in Paris, and I would like to play it during the day.

"If I have to play at night, it would seem unfair to me," Carlos Alcaraz replied a couple of hours later, after his victory over Kachánov in the Parisian night. If you play at night you have less time to rest, and you don't finish at twelve, because then it's time for physio and dinner. And for me, it would be the third match like this. That's not fair.

(At noon this Monday, the organization confirmed that Nadal should face Djokovic at night; Alcaraz-Zverev will be played around half past four in the afternoon).