How do you get to premiere at the Liceu?

The two main objectives of the Òh!pera project. 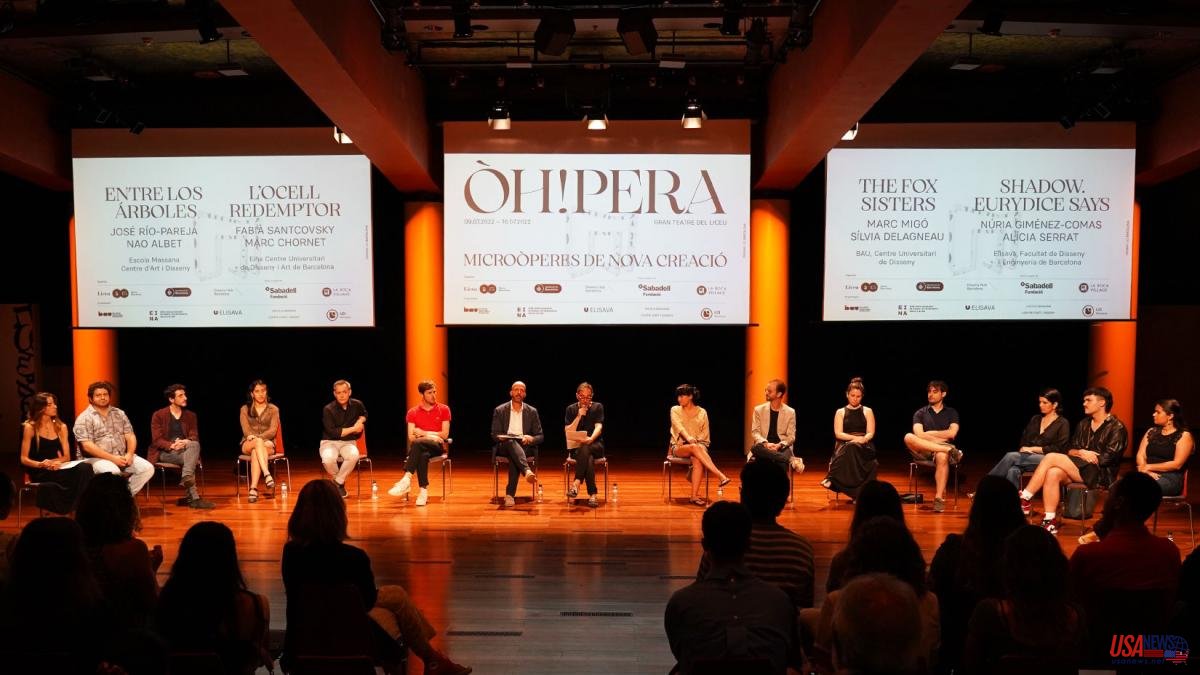 The two main objectives of the Òh!pera project. Microòperes de nova creació are the visibility of the operatic talent that exists in Barcelona and, at the same time, create new audiences. Yesterday an initiative was finally presented in which the administrations, the Gran Teatre del Liceu and various entities and private companies have been involved, and which the artistic director of the lyrical coliseum, Víctor García de Gomar, summed up yesterday in the presentation as "a new door of access to the opera”.

An opinion signed by Àlex Ollé, artist-in-residence at the Liceu and who is in charge of the artistic direction of the project, stating that it is about "providing opportunities and, at the same time, generating a new pool of creators that also attracts new audiences to the opera".

At the moment there are four proposals that can be seen and heard simultaneously in different spaces of the Liceu (Sala de losmirros, Teatrino del Conservatorio and Foyer) on July 9 and 10. The works that will give life to this newborn initiative touch on different themes, although two of them focus on the revision of classic characters: Eurídice in Shadow. Eurydice says, and Mélisande in L'ocell redemptor. For her part, The Fox sisters revolves around a séance, while the meeting of future boyfriends and the appearance of her ex-boyfriend is the central theme of Between the trees.

García de Gomar explained that this project actually has several phases. The initial one is the realization of these four pieces of between 20 and 25 minutes, and then to see how they have worked, which ones have been more successful and which creative teams – made up of composer, lyricist, stage director, and students from design schools of the city ​​– have worked better to go further and perform a second opera of sixty minutes and finally a third opera, “generous”, of 90 or 120 minutes and which would premiere in the main hall.

The common characteristics of the pieces that give life to Òh!pera is that each one has a maximum of six musicians, including singers and instrumentalists. The creative teams of the different microoperas are: the composer José Río-Pareja and the stage director Nao Albet (Between the trees); composer Fabià Santcovsky and stage director Marc Chornet (L'ocell redemptor); The Fox Sisters, composed by Marc Migó and directed by Silvia Delagneau, and finally Shadow. Eurydice says created by Núria Giménez-Comas and stage direction by Alícia Serrat.

Also during the elaboration of the pieces have participated students of different centers of art and design of the city, under selection of the Disseny Hub Barcelona: Escola Massana, Elisava, EINA, BAU and LCI Escola de Disseny i Arts Visuals.

The underlying substrate for this idea and its materialization was defined by Àlex Ollé from a personal point of view. “This project reminds me of my beginnings putting together the first works with La Fura del Baus. We were not afraid and we liked the risk. If we give this initiative the impetus of the Barcelona of the 1980s, it is as if we were giving it to the Barcelona of the future”. And he concluded: "Oh! Pera is a project to give opportunities, and this is something increasingly difficult. It is a great opportunity for these young people to work with professionals, and above all in opera, which is the total spectacle”. García de Gomar joined the latter, saying that this initiative "makes it easier for young people to learn in a real environment."