Hisham Matar: "We need active peace and justice without revenge" 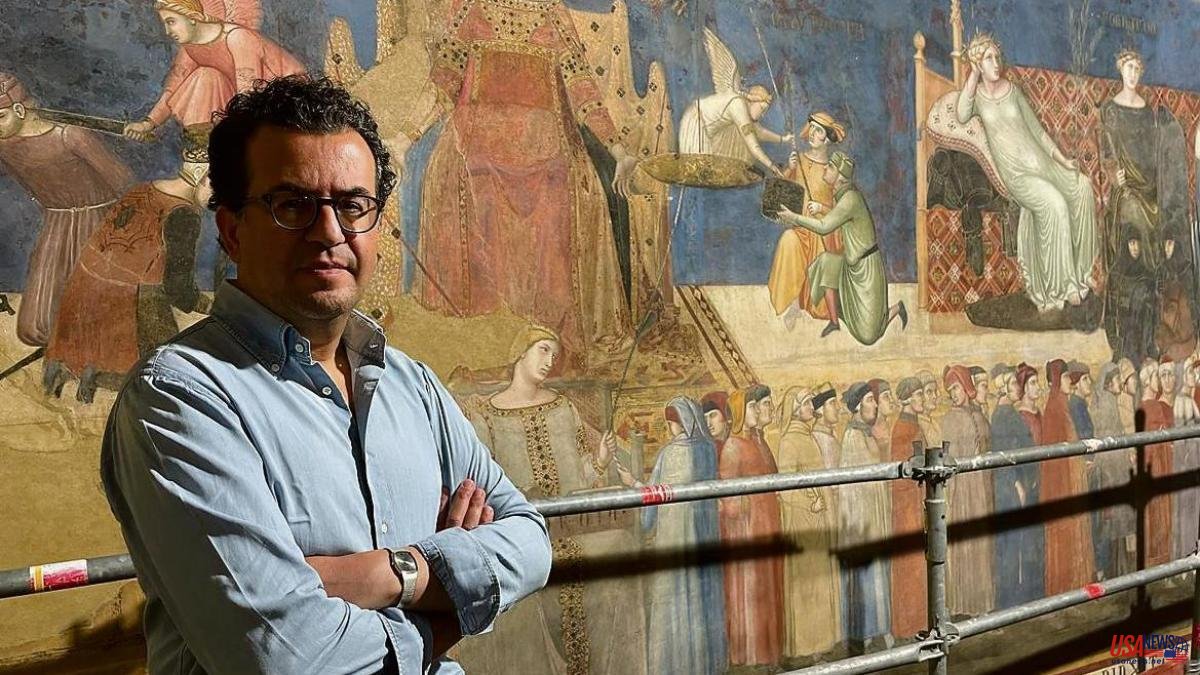 Hisham Matar feels good about returns. He returned to Libya after more than three decades of exile to rediscover the landscapes of his childhood, from where his family, opponents of Gaddafi, had fled. And where his father ended up disappearing in Abu Salim prison. He spoke of all this in the book The return, of 2017, worthy of the Pulitzer. When he finished writing it, he moved to Siena for a month. He wanted to discover in situ the works of the painters of the city school, the same ones who in the National Gallery in London caught his attention when he took refuge every day at the age of nineteen after learning of the kidnapping and imprisonment of the father of the. "Those paintings gave me the impression, as they still do now, of harboring a feeling of hope," he writes in A Month in Siena (Salamandra), a book that is linked to the previous one.

One of the paintings he used to stare at for days was The Healing of the Blind Man by Duccio di Buonisega, divided into two halves. In the lower one, the characters appear and the scene unfolds. In the upper one, the urban landscape of geometric buildings stands out. Matar has moved this double plane in his latest book, where on the one hand he talks about the power of art and on the other, he releases thoughts and reflects on the world around us. And he does it with those same fine, lyrical brushstrokes of the Sienese master painters.

Now he has just starred in another return, more pleasant and grateful. She has returned to that Siena to, in some way, offer her the book that she dedicates to her. And it could not do so in a better setting than before the frescoes of one of the masterpieces of this school, The Allegory of Good Government that Ambrogio Lorenzetti painted in 1338 in the Hall of the Nine, the meeting place of the magistrates who governed the city. city ​​from the Palazzo Pubblico, and which is the focus of several chapters of his work.

The painting is in the process of being restored and Matar climbs onto the comfortable scaffolding next to La Vanguardia to contemplate it as is never usually done, face to face, from the same height where the artist created it. “It is a very special and intense moment”, he reveals without taking his eyes off the female figures of the seven virtues. “There are details that are difficult to appreciate from below. Look at Paz, her white dress is actually transparent. She looks innocent, defenseless, lying on top of some armor that she seems to want to hide, ”she reflects. "This type of peace cannot work in the times we live in, we need an active peace, not a passive one."

His gaze moves before the virtue of Justice with its inseparable balance. "For me, justice is not revenge," she says. "You must look inside people, listen and seek balance." And he sits down in front of her to read, almost whispering in her ear, a fragment of her book. She chooses one that refers to a character from the council of citizens who holds a cord braided by Concord that unites Justice with the Common Good. His clothes are different from those of the others and his skin color too. “It is possible that this dark-skinned individual was a Saracen. I wondered how he would deal with the occasion and if he had already adapted to his adoptive country. It is possible that Lorenzetti introduced it in the composition to advocate the advantages of a system of government based on tolerance and inclusion”, concludes the reading of it aloud.

Matar rises up and runs through the three murals that make up Lorenzetti's trilogy and that, in some way, evoke fundamental aspects of his life, from Justice itself, Peace or the presence of the devil (with certain airs of Gaddafi), whose evil government forever marked its existence. “The big problem with tyranny or fascism, setting aside all my moral or ethical objections, is that they create an environment of great instability that lasts for several generations. It has happened in Libya, but also in Spain, where the consequences of Francoism are still noticeable”, he maintains before lamenting “the loss of interest in politics, especially in Western Europe”, which for the writer is still “ dangerous". And he appeals to the responsibility of citizens to exercise their role, "nothing can work without this", as Lorenzetti illustrates in his painting.

Matar does not know why the works of the Sienese school manage to attract his attention. "When you manage to connect with art, it gives you life, energy," he analyzes. "It makes us feel a little less alone and more connected to humanity," she adds. “Fate is complicated”, he reflects when he remembers “the experience I had to live”. And if until now his literature had as its axis the disappearance of his father, his exile and even the use of false identities, in the following novel that he has finished a few days ago and that will be published in 2023, he changes register . "It's about friendship, particularly friendship between men," she advances. "I write not so much to find peace, but because it is the greatest emotional and intellectual pleasure there is," she confesses.

(Museum of the Opera del Duomo)

“In that world almost devoid of images, those pictorial representations greatly moved and consoled all believers. It was initially installed in the cathedral.

"Our Lady of the Franciscans"

“The master did not intend his painting to be approached from a position of affiliation, but from the mere condition of being human”.

'The Virgin of milk'

“Death doesn't interest him in the slightest. He wants to live, and well too. He wants it all. He satisfies his wishes without qualms. He is an assertive and free boy, framed in a realistic image”

"I couldn't say why, but the more I looked at The Announcing Angel, the more the pain that gripped my chest grew, as if I longed for a particular person, place or time that had disappeared forever."