His Majesty, the cultural icon

From the punk anthem of the Sex Pistols to the pop art of Andy Warhol, literature, cinema or theater, the figure of Queen Elizabeth II has permeated all areas of culture like few others. 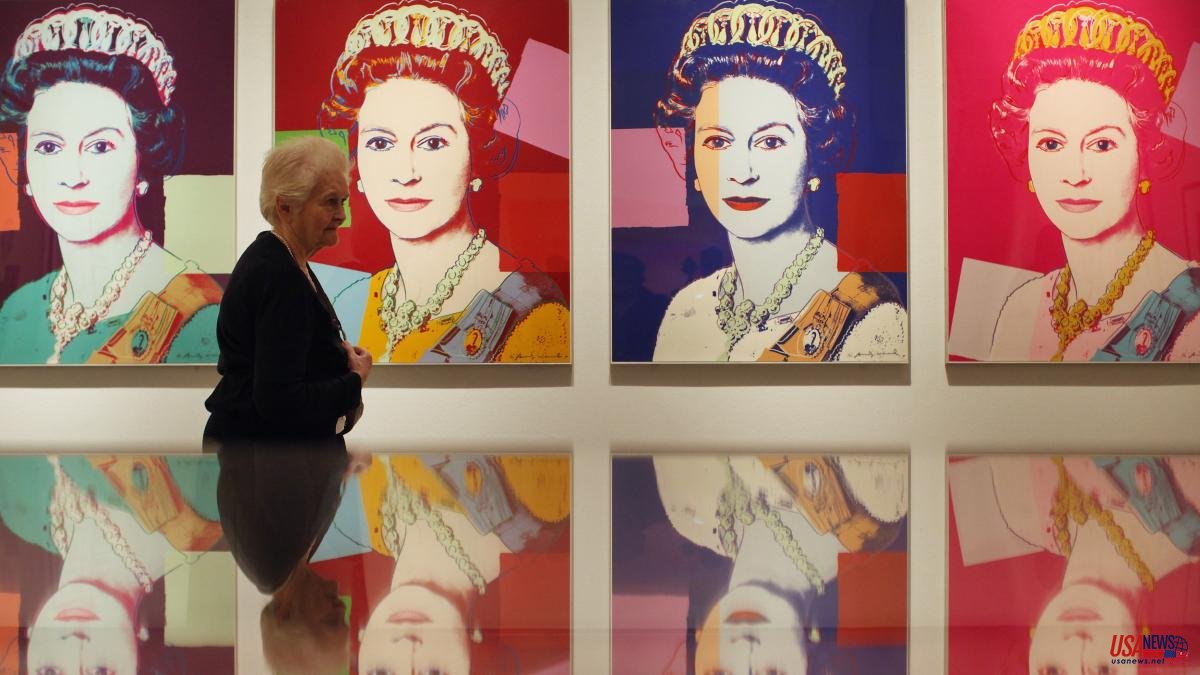 From the punk anthem of the Sex Pistols to the pop art of Andy Warhol, literature, cinema or theater, the figure of Queen Elizabeth II has permeated all areas of culture like few others.

God save The Queen is perhaps the most emblematic and popular song that refers to Queen Elizabeth II of England (it was released on her jubilee in 1977). It is in fact the iconic song of its authors, the punk group Sex Pistols, both for its compulsive rhythm and above all for its lyrics (it began without half measures: “God save the queen / The fascist regime / It has turned you into an imbecile / A potential H-bomb”), but not the only one of a large list of soloists and bands with compositions centered on his figure. Even in Spain, as witnessed by the Queen of England signed by the Solynieve Expert Group in 2008.

But it is the British who take the cake, like the Beatles, who in 1969 released Her Majesty in a neutral tone, tending to be positive, or those who wished it the opposite, like Elizabeth my dear, by the Stone Roses (“Tear me apart and boil my bones / I will not rest until she loses her throne”). By the way, despite that Beatles theme, we must not forget a memorable situation: on November 4, 1963, the band participated as special guests at the Royal Variety Performance, where John Lennon spoke before the public, including the Queen Mother and Princess Margaret: "For the last number I would like to ask for your help, those of you in the cheap seats clap your hands, the rest of you jingle your jewels."

There is a list of prominent names in the pop field who contributed their grain of sand such as Robbie Williams (The Queen), Gary Barlow or Pet Shop Boys (Dreaming of the Queen). But the examples that have endured over time are clearly rockers: The Exploited, with Royalty; The Housemartins (Flag day); Primal Scream (Insect Royalty); the very combative Billy Bragg (Rule Nor Reason) and where she leaves her surprisingly well, human ("... The queen on her throne listens to Shirley Bassey records when she's alone / and looks out the window and lays down mourn"); Manic Street Preachers with the forceful Repeat (stars and stripes) where they say "fuck the queen and the country"; or The Smiths with their album and song The Queen is Dead, which includes the verse "Charles, have you ever longed to appear in the Daily Mail dressed in your mother's wedding veil?"

Paradoxes or not, some of the greatest British pop and rock gods have been quick to share their grief over the death of their Queen. Mick Jagger (“As a child I can remember watching her wedding highlights on television. I remember her as a beautiful young woman, the nation's much-loved grandmother”), Ron Wood, Ringo Starr, Paul McCartney (“God bless to Queen Elizabeth. May she rest in peace. Long live the King”) II or Elton John (“The Queen has been a very important part of my life, from my childhood until today and I will miss her very much”).

Few heads of state can count, as is the case of Isabel II, with several novels in which they are protagonists. Since fiction, the character has been treated with great sympathy by British authors who dared to do so. The best work is, in this case, also the shortest, An Uncommon Reader (Anagrama/Empúries) that Alan Bennett published in 2007. The plot is as follows: one day, chasing his dogs through Buckingham gardens Palace, the monarch discovers, next to the kitchens, the municipal mobile library van, enters it and decides to borrow a book. From then on, a fever for reading will awaken in her that will change her interests and her conversations, which provokes the stupor of her collaborators and her heads of state who visit her.

Also British S.J. Bennett has used the queen as the protagonist of a series of novels in which Elizabeth II solves criminal cases by secretly investigating, like a crowned Miss Marple, without abandoning her duties as monarch. She kicked it off with 2020's The Windsor Knot (Salamander), where one of her 90th birthday guests (a Russian pianist) is found murdered; It was followed, in 2021, by A Case of Three Dogs (Salamandra), where the ruler of the palace is found dead by the pool.

Sue Townsendya had published in 1992 The Queen and I (Ediciones B/Empúries), set in April 1992, when the Republican Party won the elections. The first measure of its leader is to expel the royal family from Buckingham Palace and assign them official protection housing in Hellebore Cióse, a degraded neighborhood in which the former queen is gradually learning the tasks of her new condition and producing in her an emotional awakening, after a lifetime of controlling your feelings.

From the colorful serigraphy of Andy Warhol in the mid-eighties, in which he certified his status as a popular icon on a par with Marilyn Monroe, Elizabeth Taylor or Chairman Mao, to his representation as a pin-up with stilettos and the Buttless by street artist Pegasus in 2015, the queen has not only been the most photographed and painted woman in history (Buckingham Palace itself commissioned more than 200 official portraits), but also a constant source of attraction for artists who , from veneration or irreverence, have tried to get closer to the woman behind the crown or have used her image to express their own ideas or visions of the world.

More than his official portraits, with exceptions such as Chris Levine's hologram in which the queen appears dressed in a white ermine with her eyes closed, or the controversial portrait of Lucien Freud, whose crude humanity angered the most monarchist sectors ("It's a farce, your majesty”, headlined The Sun) and was praised by critics, it is these non-authorized works that have penetrated the most in the popular imagination. Jamie Reid, artistic director of the Sex Pistols, transformed the queen into a punk icon with a safety pin in her nose and swastikas in her eyes. Banksy drew her in black and white on a wall in Upper Maudlin Street with a jagged lightning strike across her face like David Bowie's in Ziggy Stardust and Michael Moebius showed her blowing a bubble gum. One of the last was signed last spring by Ai-Da, a humanoid artist.

That of Elizabeth II was a movie life, dotted with family scandals, from which both the big and the small screen have been able to squeeze the most. A huge Helen Mirren embodied the monarch in The Queen (2006), a film by Stephen Frears that narrated the political events that occurred after the death of Princess Diana of Wales. The British actress returned to get into her skin years later in the play The Audience, by Peter Morgan. Precisely, this work served as inspiration to create the acclaimed Netflix series The Crown that from 2016 to the present recounts the life of the monarch. Actress Claire Foy is fantastic as Elizabeth II in the first two seasons, as is Olivia Colman as she comes of age. Imelda Staunton plays her in the fifth season, which premieres in November.

Tom Hooper's Oscar-winning film The King's Speech focused on the stuttering of George VI, father of Elizabeth II, and his relationship with an expert speech therapist played by Geoffrey Rush. The tape presented a little princess of only eleven years with the face of Freya Wilson. In Spencer it was the Scottish actress Stella Gonet who assumed the character accompanying a lonely Lady Di with the physique of Kristen Stewart. But if there is someone who has earned to be her film double, it is Jeannette Charles. She is credited as "the queen", "queen of England" or "queen Elizabeth" in more than 30 works, especially cameos. She is currently 94 years old. Even in longevity she resembles her.

Queen Elizabeth II is still alive… onstage. Handbagged is being performed at the Kiln Theater in London, a satire by Moira Buffini that portrays a decade of meetings between the monarch and the iron lady, Margaret Thatcher, between which sometimes real clashes take place on account of apartheid in South Africa or because of the Thatcherite claim that "society does not exist." Hanbagged returns to the theater repeatedly since its premiere in 2013 and it is not the only play dedicated to the long-lived queen. The audience , by the playwright and screenwriter Peter Morgan (author of the screenplay for the film The queen ), also imagined the monarch's audiences with no less than eight of the prime ministers she has seen pass through 10 Downing Street, from Churchill to David Cameron. Passing, obviously, by Thatcher herself. A queen who was brought to life in this case on stage by Helen Mirren and in later reruns by actresses such as Kristin Scott Thomas.

By the way, the play premiered in Moscow in 2017 with Inna Churikova as the queen, showing that her role was of interest to Russia beyond the condolences that Putin has sent. Elizabeth II also appeared mixed with Russia in A Question of Merit , by Alan Bennett, premiered at the National Theater in 1988, and in which the protagonist is the great British art historian and Russian spy Anthony Blunt, with whom the queen will share reflections. A monarch Sue Townsend sends to Leicester with her family in the new republic of Great Britain in The Queen and I. In Leicester Elizabeth will discover her hidden talents.

Beyond being a character in a play, the queen went to the theater frequently and The Society of London Theater wanted to remember her with a statement that, in addition to remembering that she was devoted to the Royal Shakespeare Company and that she inaugurated the great totems such as the National Theater on the Southbank, one play was more his than any other, Hammerstein's musical