The slow and sprawling storm system named Henri drenched much of the inland Northeast with rain Monday, hampering cleanup efforts and threatening further flooding in areas with ground already saturated from a wet summer. 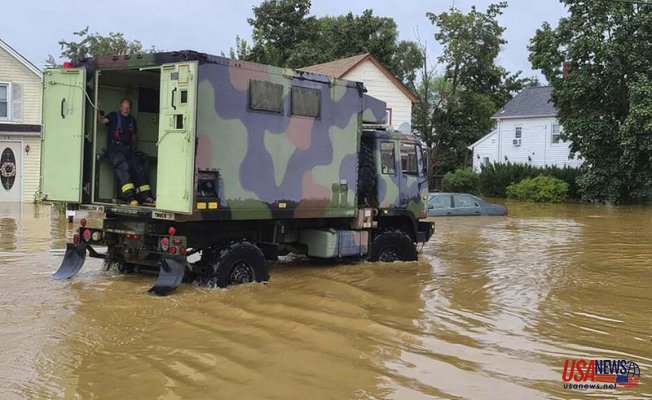 Rains from the storm, which spared coastal areas of New York and New England major damage when its center made landfall Sunday in Rhode Island as a tropical storm, deluged areas from New Hampshire to New York City and down to New Jersey and Pennsylvania.

New Jersey was set for more rain. As much as 8 inches (20 cm) of rainfall had fallen in some areas on Sunday. Some areas were still trying to get clean.

Around 200 people fled Helmetta in central New Jersey to seek higher ground. They stayed with friends or in hotels as flood waters threatened their homes.

"It happened so fast -- in the blink, of an eye," Mayor Christopher Slavicek said. His parents had fled their home and were staying the night with him. "Now, there's cleanup. This is not the end.

According to the National Weather Service, there were potential for torrential downpours and flooding Monday in New England. There was also a possibility of tornadoes.

Officials in New England worried that just a few inches more of precipitation would cause a major problem after a record-breaking summer.

Linda Orlomoski said that Tuesday is supposed to be hot and humid. She was without power in Canterbury on Sunday night. "If we don't have power by then, it will be very miserable."

Many customers were without power in Maine for hundreds of hours, but there was minimal outage in Vermont and New Hampshire on Monday morning.

According to the National Hurricane Center, Henri's remnants would stall at the Connecticut-New York border, move eastward through New England, and then push out towards the Atlantic Ocean. The area was expected to receive rain amounts of 1 to 3 inches.

The tropical depression was now moving east at 1 mph (2 km/h).

"We're doing everything we can now to help those states prepare, respond and recover," said the president, who also offered condolences Sunday to Tennessee residents, after severe flooding from an unrelated storm killed more than 20 people and left dozens missing.

Henri had experienced winds up to 60 mph (97 km/h) when it made landfall near Westerly in Rhode Island.

The storm cut power to thousands and swamped roads, leaving some people stranded in cars. Four residents of coastal nursing homes had to be evacuated in Connecticut. Several major bridges in Rhode Island were temporarily closed Sunday and many roads were almost impassible.

After being spared severe damage, beach towns across Long Island, including Cape Cod, Massachusetts, were relieved. There were concerns when Henri was temporarily rated as a hurricane. This meant that it had stronger winds and the potential to cause a storm surge. However, this was before it was downgraded back to a tropical storm.