Haaland disguises himself as Cruyff against 'his' Dortmund

The European day left an image that will be remembered. 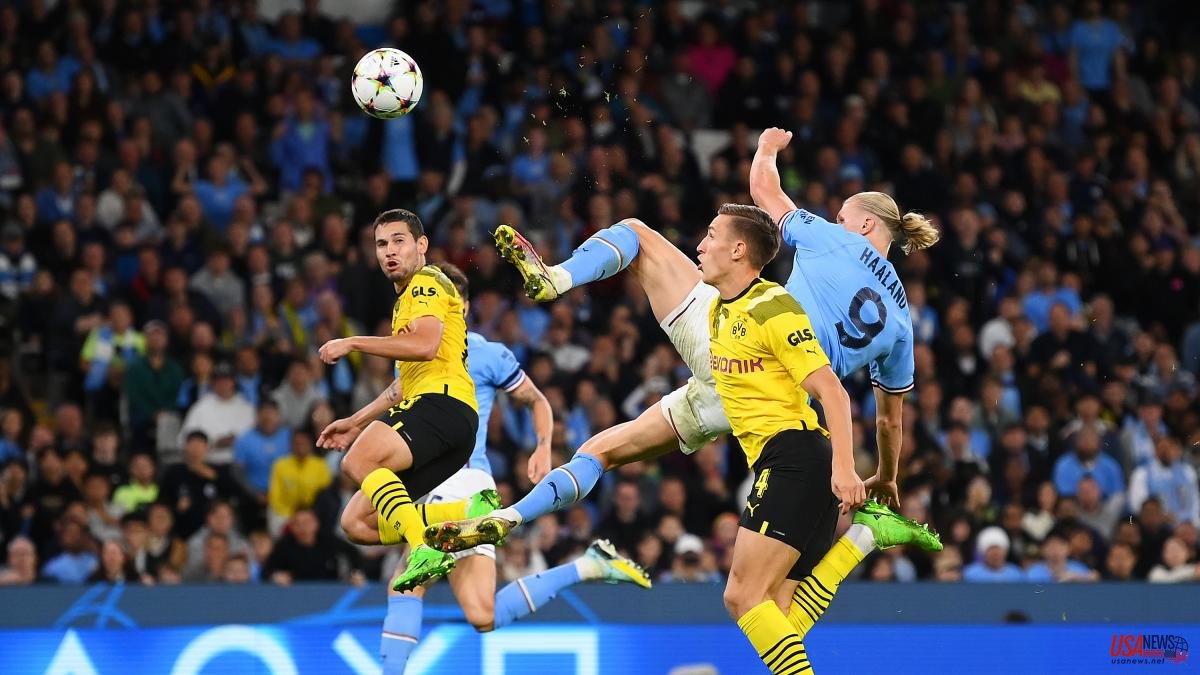 The European day left an image that will be remembered. Like Cruyff himself, the Norwegian Erling Haaland scored a spectacular spur goal in the final stretch of the match against Borussia Dortmund, his former team, which served Manchester City to complete the comeback at the Etihad Stadium (2-1).

Pep Guardiola's men had to row against the tide after Bellingham's goal in the second half, and when everything seemed lost, Stones appeared to equalize with a powerful shot from the edge of the box. A few minutes later the Norwegian dealt the final blow. A goal worth its weight in gold.

PSG's trident had to come to the rescue once again in Israel. A bad ball out between Sergio Ramos and Verratti that ended in a goal for Maccabi Haifa conditioned the Parisians as soon as the match began. Mbappé appeared to assist Messi and tie the match.

But the Israelis were better and demanded a lot from Donnaruma until the final stretch, in which Mbappé made the second after a magnificent pass from Messi. Two minutes from the end Neymar sentenced the duel.

Graham Potter failed to win on his debut on the Chelsea bench against a daring Salzburg (1-1) side who were always in the game despite conceding a Sterling goal just after the break. The visitors went further in the second half and a quarter of an hour from the end Okafor made the final tie. When Chelsea wanted to react it was too late. Londoners remain bottom of the group.

Napoli cruised to victory over Glasgow Rangers in Scotland to move to sole leadership of Group A. The Italians won thanks to a penalty converted by Politano minutes after Zielinski missed a penalty twice against McGregor.

The game was unbalanced in the second half by the expulsion of Sands after knocking down Simeone inside the area. There Zielinski failed but Politano scored. However, the referee ordered the penalty to be repeated for invasion of the area and McGregor again stopped Zielinski's shot. At the third, after the hands of Barisic, Politano scored the goal that put the Italians ahead. Raspadori, in the final stretch, made the second and Ndombele the third.

Juventus fell at the Olympic against a great Benfica, who managed to come back from Milik's initial goal. The Portuguese got back on their feet and before the break they equalized from a penalty through Joao Mario. At the beginning of the second half, Benfica confirmed the comeback through David Neres.

With this new victory, Benfica leads their group together with PSG and leaves Juventus in a very compromised situation. The Italians still haven't scored after two games and the defeat at home against a direct rival like the Portuguese will be a heavy blow for the Bianconeros.