Guide to not miss anything of the 'Tosca' of the Liceu

Stage a new production of Puccini's Tosca is always a reason for great expectations in theaters such as the Liceu, especially if the stage proposal bears the signature of the Sevillian director Rafael R. 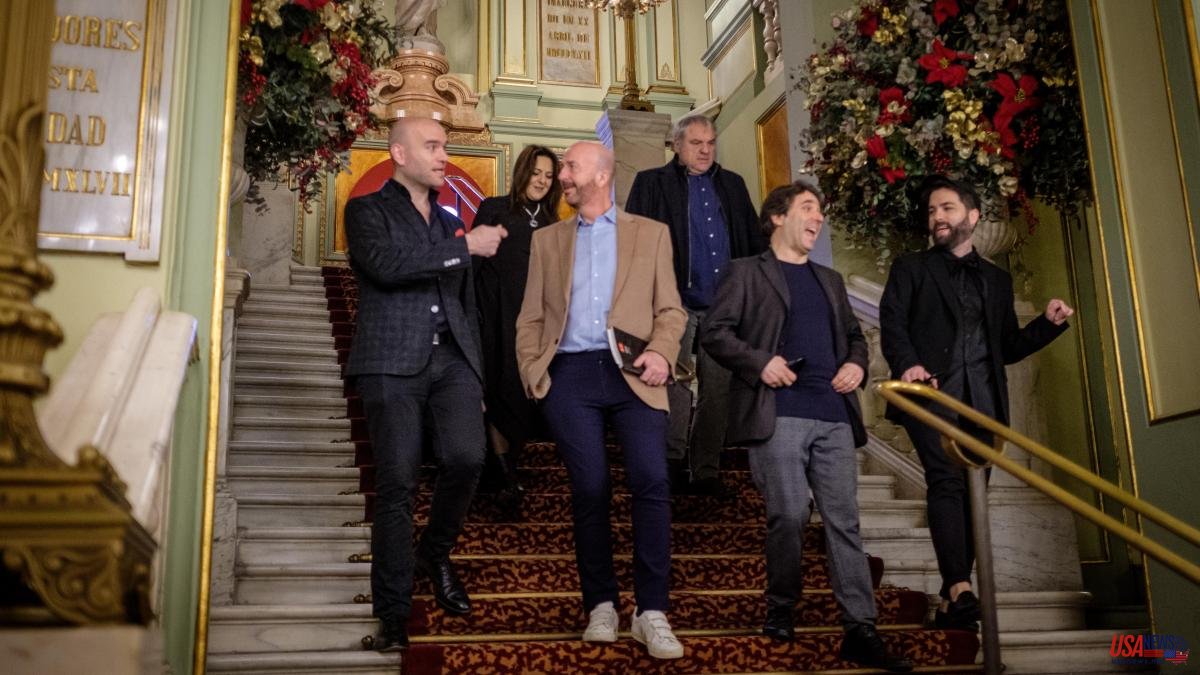 Stage a new production of Puccini's Tosca is always a reason for great expectations in theaters such as the Liceu, especially if the stage proposal bears the signature of the Sevillian director Rafael R. Villalobos and poses a superposition of layers and historical references that, located all of them in Rome, are added to the original plot, that combination of love, torture, death, jealousy and intolerance.

From Caravaggio to Grace Kelly-style dresses to the Republic of Saló that Pier Paolo Pasolini lived through as a child or his political assassination in the 70s... while he was planning a new film based on the figure of Saint Paul, the non-believer who ended up believing, and in Pope Paul VI, with whom he had a special relationship. La Vanguardia proposes a guide so as not to get lost in this magma of political and cultural allusions with which the montage seeks to highlight one thing: that power is always afraid of art, its freedom and its revolutionary virtues.

Giacomo Puccini's opera Tosca (1900) is based on Victorien Sardou's original drama, which premiered in Paris in 1887. The composer was fascinated when he saw it in Milan that same year, with Sarah Bernhardt playing Floria Tosca. The plot is political in nature and takes place in Europe in the 1800s, in the midst of Napoleon's invasion of Italy. The main character (played by the soprano Maria Agresta in seven of the fourteen performances at the Liceu) is that of a singer, a believing artist and a woman of tears and tears, and the jealous lover of a painter of maddonas who teaches her to love a be non-monogamous Mario Cavaradossi (here is the American tenor Michael Fabiano) is that painter who drinks in the liberating airs of Napoleon.

The head of the Bourbon/Vatican police, Scarpia, persecutes him for being a liberal while he pretends to her... in very bad ways. In the eyes of Villalobos, "Floria sees the world the way she has been brought up, without asking too many questions, until one day she hears the Sant'Angelo cannon twice and wonders what is strange. And her life takes a turn." overturn".

2. What do Caravaggio or Pasolini paint in the assembly of the Liceu?

Rafael R. Villalobos's debut at the Gran Teatre took place two seasons ago in a very light way, when he put together a minimalist set for the Three Queens, based on Donizetti's Tudor saga. But it is now when he shows his special working method -which was also seen in Peralada with a risky Orlando-. And he does it in this proposal that he fascinated the mayor of the Théâtre de la Monnaie in Brussels and that the Barcelona Coliseum wanted to co-produce. The Sevillian director always tries to work so that all potential audiences that come to the opera house can enjoy the performance. For which he goes "by layers of reading, layers that raise questions in the audience."

In this case, it would be about layers of what it means to be an artist in Rome, that is, that place that is the capital of a country but at the same time contains a state (the Vatican) and is the moral capital of the West . How are political-religious-artistic relationships intertwined, not only at the time when Sardou placed the original Tosca but throughout the centuries? The production changes according to the viewer's point of view: there will be those who see a classic Tosca, others pictorial, others cinematographic, or who enter the parallel story of this persecuted artist who was Mario Cavaradossi, adds the theater director and playwright.

Beyond the melodrama, Tosca is the story of a Cavaradossi who is executed for his political ideals. In the same way that Pasolini is an artist murdered in the seventies, while writing a book on the power structures of Italy, Villalobos points out. Floria's emotional development, that is, his way of discovering that structure that controls the people, here has references to the fascist Saló, not the one that Pasolini portrays in his cinematography, but the original one, the authentic one that he experienced in his childhood. And he portrays up to the present.

Characters uncomfortable for the system are annihilated in the eternal city, no matter what moment in its history. "In front of whom does the city of Rome tremble?" Scarpia wonders. But it is that he also trembles before the artists and anyone who questions a system that is perpetuated as much as his own architecture.

That timelessness is always in the scenery, which shapes different spaces, searching for the eternal city in which these structures and relationships are perpetuated. "What happens in Tosca not only happens in Sardou's Rome, but it is a story that repeats itself in a cyclical way with everything that is uncomfortable for the system," Villalobos abounds. Thus, the monumental, oppressive presence of Rome with the double authority of governmental power and that of the church, is reflected in a set that now smells of the church of Sant'Andrea, the Palazzo Farnese, the Castello de Sant'Angelo. .. Sometimes you have the feeling of seeing a building from ancient Rome such as the Colosseum and sometimes you have the feeling of seeing the Gasometer, which is an iron structure next to the Tiber river.

On the other hand, the costumes can at one point recall the Grace Kelly style, that of the sophisticated diva from the time of Maria Callas that so fascinated Pier Paolo Pasolini. But the character itself, Floria, is different from how Maria Callas played her. Because as the soprano Maria Agresta indicates, the character of the soprano tends to be imposed on the character without actually analyzing it in depth.

"Floria Tosca is a character quite different from how Maria Callas faced it. She plays Tosca but forgets about Floria. Within this body lives an artist with a lot of genius on stage, which is Tosca, and a much more insecure and down-to-earth, which is Floria", adds Villalobos. "Maria Agresta's is a much more playful Tosca, who tries to understand that her partner is not monogamous, she tries to love him as he is, even if it is what she has received as a Catholic woman that she is. Callas is always an angry Tosca who doesn't listen to Mario".

5. Beauty as a common thread

Working in terms of beauty is crucial for Villalobos, not in a naïve way or trying to sublimate the darkness of the human being, but quite the opposite, "as a channel to look at what scares us in the face." In this sense, it has an interesting contemporary plastic artist, Santiago Ydánez from Jaén, who dialogues with the plastic universe of Pasolini and with Caravaggio, the ungovernable and quarrelsome genius who died under the lash of the sun lying on a beach while he longed to return to Rome and leave his exile for murder. "Ydánez reviews the dramas of the devious characters portrayed by Caravaggio... like Judith and Holofernes, who in the Old Testament cut off his head to defend his community. It is a reference to female empowerment... and Tosca does not stop of being a femme fatale from the end of the 19th century", points out the artistic director of the Liceu, Víctor Garcia de Gomar.

6. A grateful cast that recreates the details

Villalobos's way of working with the cast is very organic, in the sense that he doesn't force them to move against what their vocal performance requires, but concentrates on bringing out that duplicity of characters. Scarpia is here a proto-fascist who represses artistic and sexual freedom. And this intimidating voice will be provided by baritones Zeljiko Lucic and George Gagnidze, according to the cast. Regarding the character of Cavaradossi, the tenor Michael Fabiano will alternate with Vittorio Grigolo -who replaces a Joseph Calleja affected by laryngitis- and Antonio Corianò. While the character of Tosca is played by the Italian Maria Florea along with Emily Magee, Sondra Radvanovsky and Monica Zanettin.

7. The third most represented title at the Liceu

When an opera is as well known and has been performed as widely as Tosca -the third most performed title at the Gran Teatre, which premiered it two years after it appeared in Rome- it becomes a challenge for all musicians, because you have to recreate the piece, try to see it as if it were new, with new eyes. "You have to rediscover the colors, the spectacular effects that Puccini was looking for", points out the Hungarian maestro Henrik Nánási, the expert in charge of the Liceu Symphony for this title with which the theater starts the year.

"Puccini already conceived the work in very theatrical terms -says the maestro-. He writes everything he wants to happen on stage. Because when he saw Sardou's drama for the first time in Milan, he did not understand anything, because it was in French. But he was fascinated by the atmosphere, the candlelight, Sarah Bernhardt... and he wanted to transfer all that melodramatic effect, because he liked both the spoken and the non-spoken performance.For all that to come to the surface, you have to live every moment of each character knowing what Puccini wants. It is perhaps his most important work in terms of tension. This is maintained even in moments of lyrical pianissimi like at the beginning of the third act, with the morning bells ringing... And with this cast we are on the right track."

Fourteen are the functions that the Barcelona theater of this Tosca has programmed -from January 4 to 21-, which has already sold 80% of the capacity. On Christmas dates alone, the Coliseum has registered 75,000 euros in ticket sales. The Under 35 function will be held on the day of the Three Kings Parade, and on the 16th the live show will take place through the new Liceu LIVE platform. The filmmaker talks with Rafael R. Villalobos to find the best shots and find out when the artists come in or what are the most important moments of the work. From there, with those 7 4K cameras and Dolby 5.1 sound that the Liceu has equipped itself with, the public can view it by choosing a camera at any time, counting on the score, etc. The approximation to the expression of the interpreters themselves supposes a complementary enjoyment to the one that can be experienced in the hall. "Complementary but not a substitute", recalls the artistic director of the Liceu, Víctor Garcia de Gomar. The price of the digital subscription is 60 euros per season, although current subscribers have access for 30 during this first course.