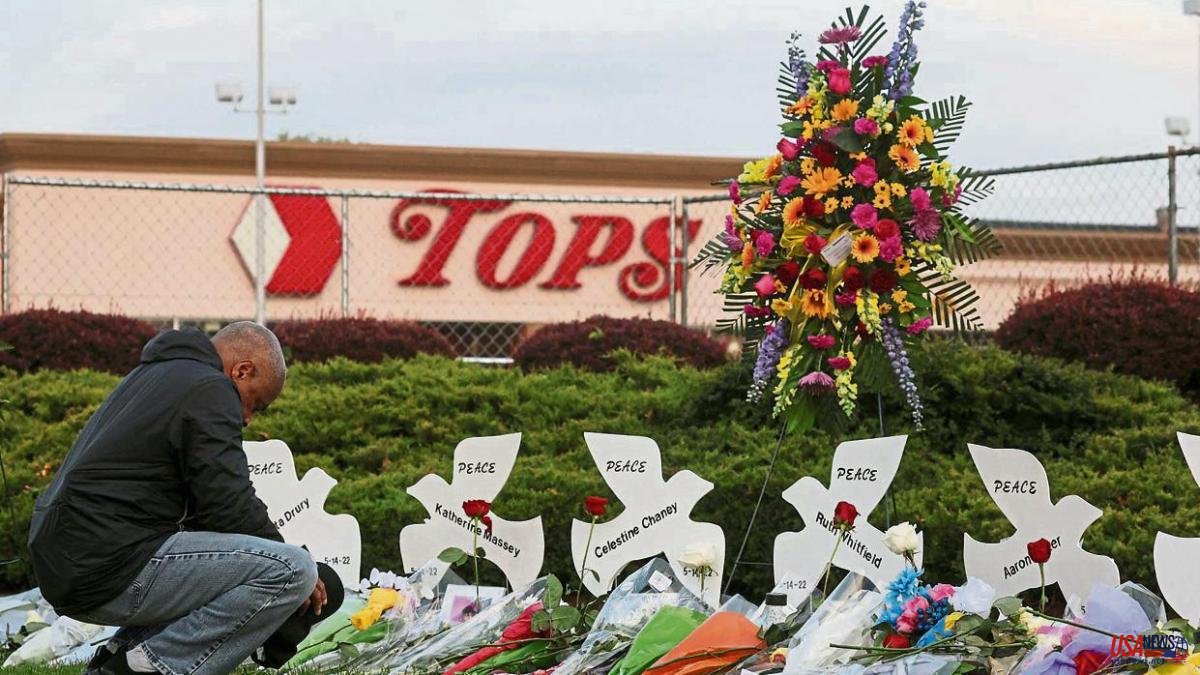 Spoiler alert. The following excerpt is part of the manifesto written by white supremacist Payton Gendron to justify a massacre: “We are experiencing an invasion on a level never before seen in history. Millions of people crossing our borders, legally. Invited by the state and corporations to replace white people who have failed to reproduce, they have failed to create cheap labor, they have failed to create new consumers and the tax base that corporations and states need to prosper. This mass immigration and fertility crisis is an assault on the European peoples that, if left unchecked, will result in the complete racial and cultural replacement of the European people."

With this racist and conspiratorial hogwash as an argument, on May 14, Gendron, 18, traveled 320 kilometers to a Tops supermarket in the city of Buffalo (New York). He had a coldly calculated plan. He was looking for a majority black city and neighborhood. He entered the establishment, opened fire with an AR-15 rifle (legally acquired, of course) and killed ten people, eight of them black. The attack was broadcast live for a few minutes on Twitch thanks to a body camera. Shortly before, he had posted the aforementioned manifesto on the infamous 4chan forum, a 180-page pastiche in which he compiled praise for other supremacist terrorists, pasted memes and dressed his racial hatred as part of the fight to avoid the great replacement.

This is the theory according to which there is a plan devised by the political and economic elites (controlled by the Jewish lobby) to turn the white population into a minority. It is not a new conspiracy, some anti-Semitic texts from the 19th century already play with the idea, but in 2011 the French writer Renaud Camus knew how to give it a punchy name and popularize a concept that was perhaps too theoretical in his book The Great Replacement. "It's a book with almost no data," says Arsenio Cuenca, a doctoral student at the Practical School of Higher Studies in Paris specializing in extreme right and technology. "Camus tells you 'Look out the window, what do you see? A kebab, veils, neighborhoods that are transformed… ’”, he explains. The text was adopted by the reactionary intelligentsia and, from there, it filtered down to the underworld of the internet, where the concept was mixed with the rest of the conspiracies encouraged by groups of supremacists, incels (involuntary celibate), homophobes and other resentful of ultras forums to justify their hatred and, sometimes, their crimes.

The grand replacement theory has left a trail of destruction stretching from Norway, where Anders Behring Breivik killed 77 people, including 69 at the Social Democrats' summer camp on the island of Utøya, in 2011, to Christchurch, New Zealand, where Brenton Tarrant killed 51 people in two mosques in 2019. Both promoted their ideology in writings criticizing immigration and arguing that violence was necessary to preserve Western civilization.

"In the past it was very difficult to have access to theories such as the great replacement or white genocide, which appears in the US neo-Nazi circles. and which is more similar to what can be seen in the manifesto of the Buffalo terrorist" , maintains Cuenca. “In the past, this type of content was absolutely marginal, it was not present in the media sphere and it was very difficult to access it. Now, the problem is not only that some issues such as the great replacement are very present in the media and political discourse, either by political commentators or by leaders of certain formations, but also that gateways are created around spaces that in theory are innocuous”, he assures.

This theory has been more or less explicitly adopted by far-right parties, but its influence goes further. Marine Le Pen and Éric Zemmour, in France, speak unapologetically about the risks of European culture being replaced by immigration. In Hungary, Viktor Orban speaks of a "ticking time bomb" against Christian values. This same week, the leader of Vox, Santiago Abascal, affirmed that many Spaniards "live in cultural insecurity" because of "multiculturalism." The president of the European Commission, Ursula von der Leyen, inaugurated her mandate by baptizing the immigration portfolio as "protection of the European way of life".

An October 2021 poll revealed that 67% of French people were worried that a "great replacement" could happen in their country. In the United States, nearly a third of the population is very or extremely concerned that "native-born Americans are losing economic, political, and cultural influence due to a growing immigrant population," according to a survey from December of the same year.