Behind closed doors, the deputies of the Interior Commission have viewed this Friday in Congress the videos of the tragedy of the Melilla fence that the Ministry of the Interior has made available to them. 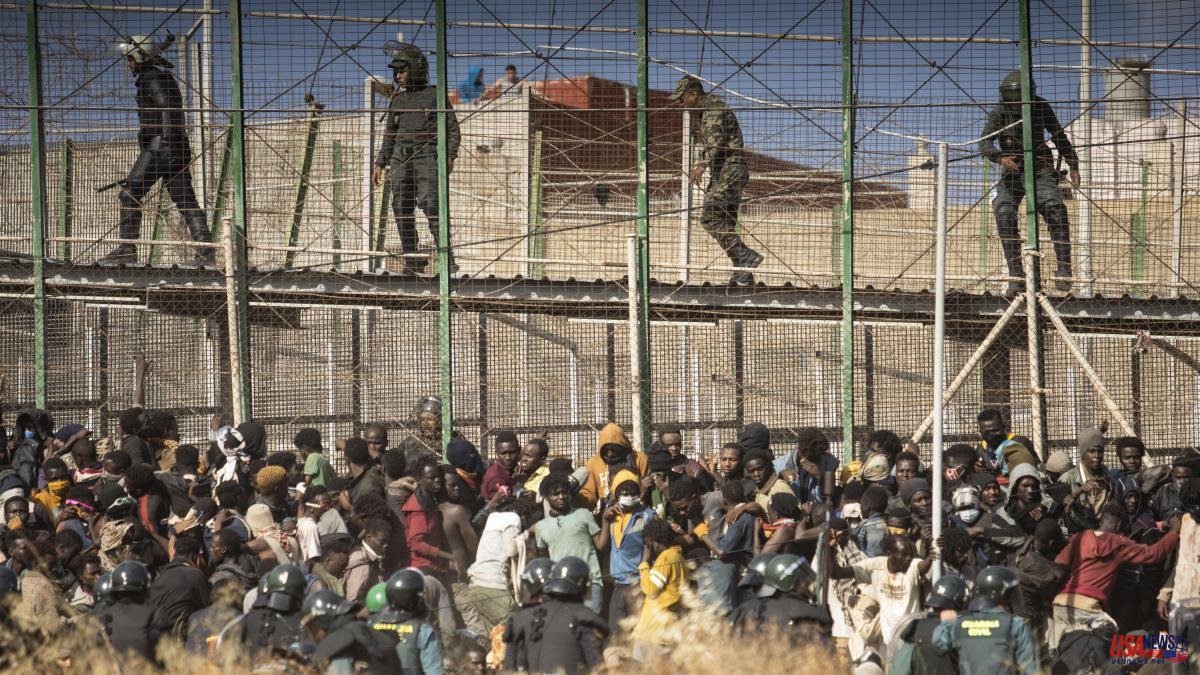 Behind closed doors, the deputies of the Interior Commission have viewed this Friday in Congress the videos of the tragedy of the Melilla fence that the Ministry of the Interior has made available to them. They have been able to stop and rewind the recordings when they have seen fit. After several hours, and despite the fact that they have not viewed all of them, the political groups –with the exception of the PSOE- remain anchored in their position prior to viewing: the Minister of the Interior, Fernando Grande Marlaska, has lied. For this reason, they consider crucial the explanations that he is obliged to give, again, on November 30 in Congress.

The deputies of the Interior Commission in the Congress of Deputies began at 9:00 a.m. to view the recordings of the Melilla tragedy that resulted, according to official Moroccan data, with 23 deaths. Although there are more than six hours of recording distributed in 74 files -63 of the images from the Civil Guard drone, 10 captured by the helicopter and one by the fixed camera on the fence-, parliamentary sources explain that there are many parts that have been missing of interest to elucidate what happened at the time of the avalanche.

The images have been projected by a command of the Civil Guard Command in Melilla, who has answered the questions of the spokespersons of the Interior Commission, who have been the only ones who have been able to attend the meeting that has been held closed door in Congress, and not in the Interior as was initially intended by the department headed by Fernando Grande-Marlaska.

The parliamentary partners of the Government –from ERC to EH Bildu– have concluded that there was a “disproportionate” action by the Civil Guard agents to neutralize the massive jump of 1,700 immigrants. They insist that the migrants who were injured after the avalanche that unleashed the tragedy were not treated. And this, as they have been defending after the broadcast of the BBC report that revived the controversy, that the avalanche occurred in Spanish territory. In the images, according to the same sources present at the Commission, it can be seen that Moroccan agents entered Spanish soil to practice hot returns.

The spokesmen for the three rights have defended the action "in a complex situation" of the Civil Guard, putting the focus -as Interior has been defending in recent months- on the "extreme violence" with which several hundred of migrants who managed to access the border crossing of the Chinatown of Melilla. The Popular Party has criticized the fact that the session was held behind closed doors, hiding behind the fact that after the Tarajal tragedy – in which 15 immigrants died – all the videos could be viewed in Congress with the explanations of the high command of the Interior. The recordings were posted on that occasion on the Ministry's website. The time that the Secretary of State for Security went to the Lower House, all the videos were shown except the moment in which the agents threw rubber balls at the immigrants.

The deputy of Ciudadanos Miguel Gutiérrez has assured that the recordings show that "the violent hour" was "organized" and the "attacks" that it committed against the Civil Guard were "continuous". For his part, the far-right Javier Ortega Smith has drawn a hitherto unprecedented conclusion. The Vox deputy says that it has been verified that several of the immigrants "played dead" and when the Spanish agents separated them so that the toilets could attend to them, "the slightest carelessness they ran away" to enter national territory. No police source consulted by La Vanguardia since June 23 has offered this version.

After knowing the reactions, Interior sources show "their surprise" at the fact that the deputies have "only" seen a third of the images that have been made available to them by the Civil Guard. They have regretted that after making available about eight hours of recordings that have been brought from Melilla by a command of the Civil Guard command of that autonomous city, the deputies "only wanted to view a third part, and have left the commission without finalizing their visualization”. "It is an attitude that contrasts with the role of supposed experts who want to move later to public opinion, issuing categorical judgments about images that they have given up studying and analyzing in their entirety."