From Totor to Tintin: a large exhibition explores the lives of Hergé in Madrid

In 1929, Hergé created the reporter Tintin and his inseparable fox terrier Snowy. 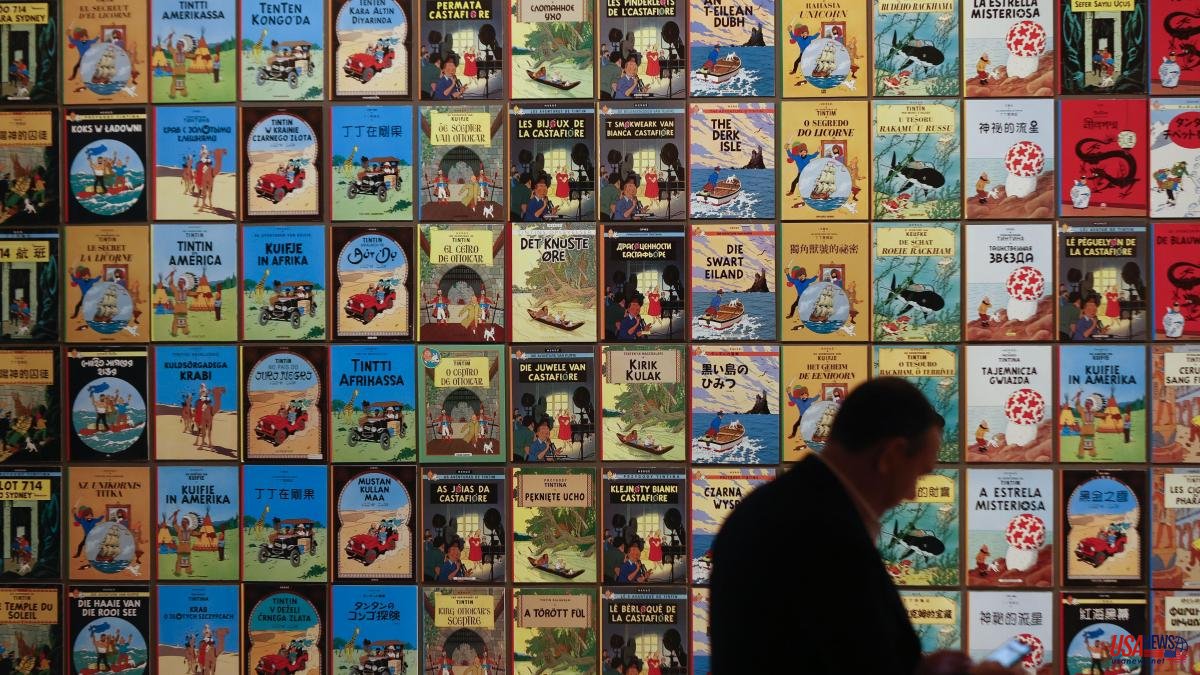 In 1929, Hergé created the reporter Tintin and his inseparable fox terrier Snowy. Later Captain Haddock and the oaths of him would arrive. And Professor Calculus, the Hernández and Fernández and the diva Castafiore. I would turn them into endearing icons of the 20th century that are still very much alive in the 21st. But Hergé, Georges Remi (Etterbeek, 1907-Woluwe-Saint-Lambert, 1983), was much more than the creator of Tintin.

The father of the clear line and the European comic had many other interests and would also powerfully venture into the world of advertising and flirt with contemporary art that fascinated him and that he would introduce in his comics. And not only that, he had difficult times, world war included, during which he worked at Le soir, a newspaper then subordinated to the occupying Nazi forces, which would mean that he would be investigated upon liberation, although he would be exonerated in 1946. In fact, it was in The Crab with the Golden Claws, published weekly in Le Soir, that Captain Haddock was born.

And all those stories now come together to reconstruct Remi's portrait with a multitude of originals and works of art at Hergé. The exhibition, a major retrospective that began at the Grand Palais in Paris, curated by the Belgian Musée Hergé, and which can be seen at the Círculo de Bellas Artes in Madrid until February 19.

The great exhibition on Hergé, in which Tintin has in any case the main role, has been seen in Québec, Seoul, Shanghai or Lisbon before Madrid, although the almighty and feared Nick Rodwell, who has been managing with an iron fist for three decades Together with his wife Fanny Vlaminck -Hergé's widow- the creator's rights, he explained at the Círculo de Bellas Artes that he was on the verge of not being born. But he was helped by the harsh fame that precedes him.

"It all started - Rodwell has told amused - when from the Grand Palais they contacted me in 2015 and asked me to make an exhibition about Hergé. I said: 'They want to say about Tintin'. They insisted: 'No, about Hergé. We think it is a great artist like Hopper, Nikki de Saint Phalle, even Picasso'. I thought that was a bit of a stretch, but if that's what they wanted, we were going to do it. And we created this show and halfway through they changed the president of the Grand Palais and the new he didn't like the sample and one day I found myself in front of 28 people just having to explain myself later I wrote an email saying that we had been working, we had all the approvals, but we were stopping everything and putting it in the hands of the lawyers . Within five minutes I got an email saying that they didn't want to have any problems with me and that they did it as I decided. So sometimes it's very good to have a very bad reputation. "

A Rodwell who has also explained that the great montage of covers of Tintin that is in the exhibition tour is a political allegory against China: "We are pro Tibet. We met his holiness the Dalai Lama at an exhibition in Brussels of Tintin in Tibet. In fact, they later rejected my request for a visa to travel to China, although I finally got it. In the Madrid exhibition you will find a wall with Tintin albums and in the center you will see a large cross made of the albums of Tintin in Tibet and surrounded by the albums with the Chinese dragon of The Blue Lotus, surrounded by Chinese domination Tibet crucified by China In the nineties Tibet was a very popular topic, but like now the Dalai Lama does not travel, it is not. That proves that it is important to travel, to meet people, to communicate. That is why we are here in Spain, we cannot stay in our little museum in Belgium", he says in reference to the Musée Hergé, created more than a decade by his wife in the town of Louvain-la-neuve in an impressive building designed by Christian de Portzamparc.

The exhibition goes back in time and starts with Hergé's fascination with contemporary art, which led him to start with an abstract painter, Louis van Lint, and to create works with clear influences from Miró, Klee or Poliakoff. Not only are works by Hergé from this period brought together - by the way, Hergé comes from the pronunciation of the initial letters of his name, George Remi - but also pieces from the important art collection that he would bring together, from Roy Lichtenstein to Dubuffet, Wesselmann, Lucio Fontana or Pat Andrea. Also on display is the portrait that Warhol made of him or the bust that his friend Tchang Tchong-Jen would make of him, essential for his approach to the Eastern world in the 1930s and for documenting albums such as El loto azul.

"With The Blue Lotus I discovered a civilization that I was completely unaware of and at the same time I became aware of a kind of responsibility. From that moment I began to look for information, to take a real interest in the people and the countries to which I sent Tintin, for a matter of honesty in front of my readers", he admitted.

The exhibition covers the universe of Tintin through fascinating originals of all kinds and shows from his beginnings drawing in the boy scouts, whose travels and ethics would influence his work, with whom he was Renard Curieux, Curious Fox and always carried a notebook in hand drawing and in whose magazine he would publish The Adventures of Totor when he was only 19 years old, who six years later would become Tintin, whom Hergé saw as follows: "He was a bit like Totor's little brother. A Totor turned journalist, but always with the soul of a boy scout.

His other comic strips, such as those of Jo, Zette and the chimpanzee Jocko -faced with a Tintin who had no family and did not go to school, the editor of the Catholic weekly Coeurs Vaillants, Father Courtois, asked him to create characters with a family- or those of Quique and Flupi add to his enormous interest in advertising: for a long time he believed that he could dedicate himself more intensely to advertising posters. Posters designed for weeklies, department stores or the airline company Sabena impress with their striking coloration and the highly effective simplicity of the message. Designs that are still going strong today. But the success of Tintin would end up changing everything.