From Santiago Segura to the Minions: commercial and family cinema revitalizes theaters

The summer season is giving a break to those movie theaters that have not finished filling their seats despite the end of the restrictions due to the covid pandemic. 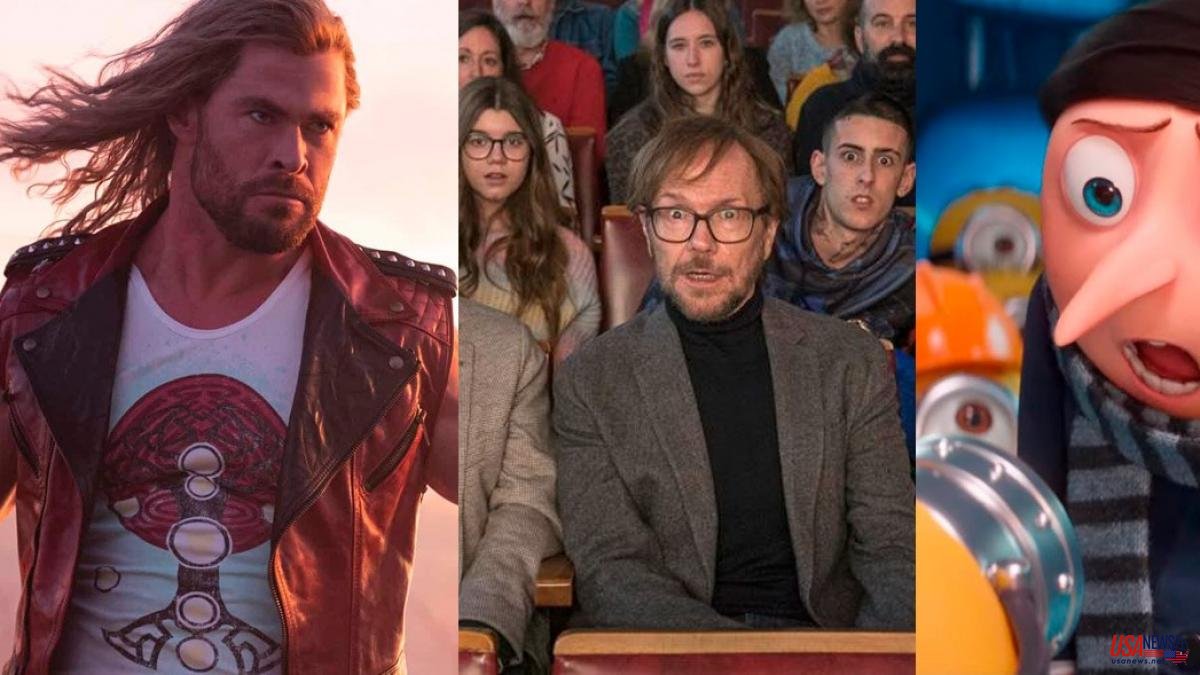 The summer season is giving a break to those movie theaters that have not finished filling their seats despite the end of the restrictions due to the covid pandemic. The general public is slowly returning to the temples of the big screen. So much time confined at home in front of the offer of the streaming platforms has forced to change the habits of cinematographic consumption. And, in a way, there is no turning back.

But there are always films that attract the viewer's attention, especially the commercials that do not usually fail in this time of summer relaxation. Just as it happens with family and animation cinema. Titles that fall like rain in May to revitalize theaters that invite you to have a good time in the suffocating heat and the long days of these holidays in the hope that the box office will pick up steam.

For now, and as expected, Bullet train has given theaters great joy in its debut on the billboard. The fast-paced thriller about hitmen in search of a mysterious briefcase on a bullet train from Tokyo to Morioka with Brad Pitt leading a cast that completes Bad Bunny, Aaron Taylor-Johnson or Sandra Bullock, has been placed directly this past weekend of its premiere at the top of the ranking. Action and black humor cinema that has met expectations after several delays in landing in Spanish theaters.

David Leitch's film has unseated Father there is only one 3, by Santiago Segura, after four weeks at the top of the classification. The Spanish actor and director has once again been crowned the great savior of national cinema with his crazy family comedy, released on July 14. The film imbued with Christmas spirit was at the top of the charts as soon as it debuted – it is shown on 694 screens throughout the country – and has since accumulated more than nine million euros and 1.6 million viewers, according to figures of the Ministry of Culture and Sport provided by Comscore based on the weekend of July 29 to 31. And that the reviews have not been very positive.

Since the first installment, it has already become a tradition that the adventures of the García Loyola family point to the top of the box office. This third episode is the best premiere of the franchise, which with the first installment reached 14.2 million and with the second it touched 13. And also the best premiere of a Spanish film since 2016, as reported by Sony, distributor of the movie.

In third place it remains unbeatable since its landing on the billboard last July 1 Minions: The origin of Gru. The Universal film that dives into the past of the children's favorite villain along with his funny yellow henchmen, has attracted the little ones en masse and, therefore, their respective parents. The fifth installment of the juicy animated saga, which takes the action back to the seventies, has raised a whopping 16.7 million euros and an audience of 2.8 million viewers.

Another production aimed at the enjoyment of the little ones in the house is DC League of Superpets, from Warner Bros, which since July 29 has raised some 900,000 euros and remains in fourth position.

With 17 million accumulated, another sequel is rising, this time the one that in principle puts an end to the Jurassic series that Steven Spielberg undertook in 1993. Jurassic World: Dominion, which combines nostalgia, action and visual spectacle, has worked phenomenally – it is the most viewed film in Spanish cinemas this year– and two months after its premiere it remains in sixth position, below another blockbuster that was already aiming high from the beginning: Thor, Love and thunder. The fourth solo story of the God of Thunder played by Chris Hemsworth adds up to 9.6 million euros and has brought together 1.4 million fans of the Marvel superhero. And up.

Another hero, the one who returns to interpret the incombustible Tom Cruise in the skin of the intrepid Navy aviator, Pete Maverick Mitchell, in the sequel to Top Gun, continues to fly without brake. Since its long-awaited premiere at the end of May, the film directed by Joseph Kosinski has been one of the most celebrated blockbusters. Top Gun: Maverick is the highest-grossing film by the American actor, the first starring the Mission Impossible star to exceed $1 billion in grosses worldwide, and a production that has unleashed a wave of eighties longing, just like than Stranger things on Netflix.

During its time on the Spanish billboard, it has already raised 9.3 million and everything indicates that it will continue to be in the top 10 for a long time. The action show, the story of overcoming, friendship and the emotional charge behind it and the majority of enthusiastic reviews it has received place it as one of the hits of this 2022.

At the moment it is ranked ninth on the list, behind the Elvis biopic directed by Baz Luhrmann, which accumulates 3.30 million and just over half a million viewers. In seventh place on the list of the most viewed there is room for another animated comedy released on August 5: A Samurai Hero: The Legend of Hank, inspired by the classic Hot Saddles (1974), by Mel Brooks, which puts the voice of a character in the original version at 96 years old.

More discreet, but no less prominent for that, is the entry that has starred in Héroes de barrio, another Spanish family film, a genre that shines especially during the holiday season. This entertaining story by Ángeles Reiné about a girl –Luna Fulgencio, one of Segura's daughters in Padre hay no más que uno 3– who plays on a women's children's soccer team is currently in the last position of the top 10 . On the bill since July 29, the film distributed by A Contracorriente Films has earned around 130,000 euros.