There was a moment in the night, after, as was more than expected, the audience chanted “no hi ha prou” (“not enough”, because here there is no place for the Spanish translation of “another, another”), when there was that magical spark. 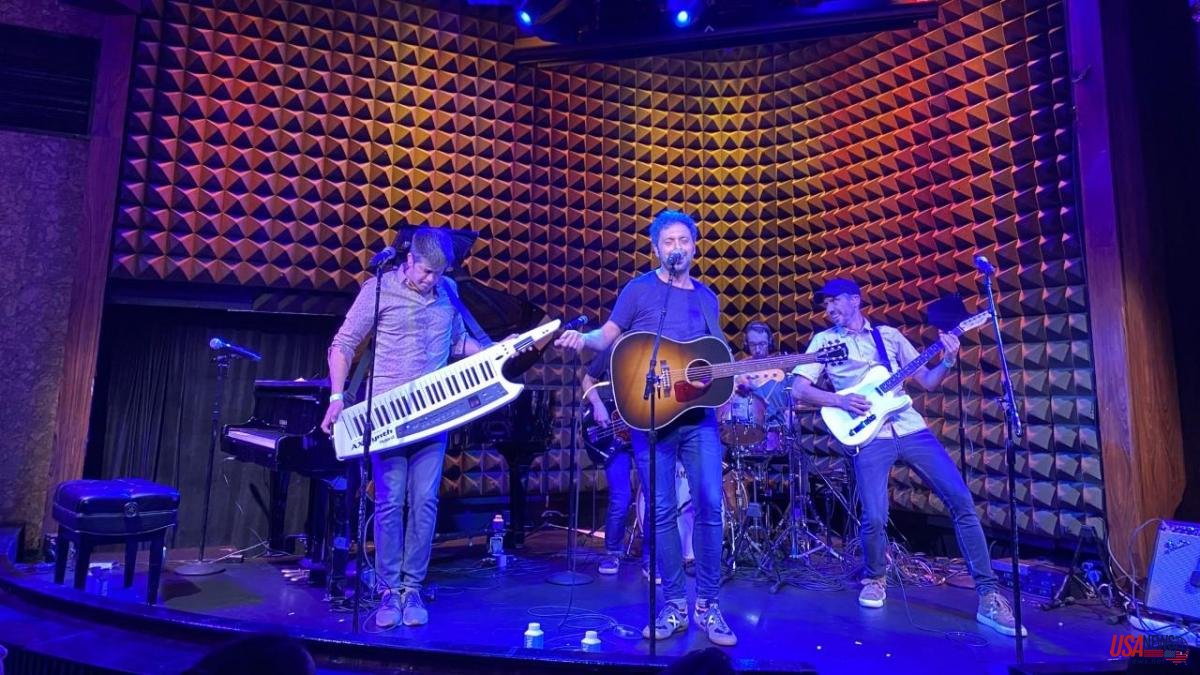 There was a moment in the night, after, as was more than expected, the audience chanted “no hi ha prou” (“not enough”, because here there is no place for the Spanish translation of “another, another”), when there was that magical spark. That moment in which the musicians and the spectators commune as one body. Rather, a soul.

The five performers on stage at Joe's Pub in New York remained silent and the audience repeatedly sang the final verse of "Louisiana o els camp de cotó", a song by Els Amics de les Arts that has become a hymn for Catalans who they are far from their land, a pop recreation in letter format with a certain air of “L'emigrant” by Jacint Verdaguer and Amadeu Vives.

This modern narration of the one who leaves home to look for life is signed and performed by Joan Enric Barceló, Dani Alegret and Ferran Piqué (the nucleus of the band, in the absence of Eduard Costa, already independent). It especially resonates Thursday night on her debut North American tour, her first transatlantic tour (Montreal, New York and Washington, in that order). Along with the founding trio are Pol Cruells, on bass, and Ramon Aragall, on drums.

As Ferran says, “it's one of those songs that you can never stop playing, especially when you're away from home”.

Emotion is palpable when listening to them or seeing them silent while they are the ones listening. Although other songs had already managed to catch the public during the concert, none like this one. “People feel very identified”, clarifies Dani. They know it, they are more than certain that this emigrant strikes a chord. No tears are discarded.

They still do three other encores, classics from their repertoire (“Jean Luc”, “Ja no ens passa” and “Semblava que fossis tu”) that are more energetic and transport us from nostalgic introspection to euphoria. "After Louisiana, people are touched and we want it to come out well, with a smile and joy," says Joan Enric.

This is how they close their performance, with the room playing canned music while they say goodbye and avoiding any fickleness of the crowd to prolong the live show, which speaks more than well of the satisfaction of the attendees who fill the venue.

Although they have been on the road for well over a decade and have released nine albums (they are preparing their tenth, their sixth studio album), Els Amics de les Arts have managed to land in New York. It has not been easy. They say that the tour was promoted from the Casal Català in Quebec for the day of September 11, 2020. It does not seem necessary to remember what happened.

Dreams have to be pursued, and with the help of those from Quebec, the Catalan Institut in New York, the Catalan delegation and the Institut Ramon Llull, they finally managed to make it come true.

Its New York premiere has not been in just any place. In Joe's Pub, a coquettish room, with good sound, cozy, figures of the caliber of Leonard Cohen, David Byrne, Elvis Costello, Patti Smith, Adele, Amy Winehouse or Laurie Anderson have performed, just to name a few names.

And don't forget, if it serves as a premonition, that the Barcelonan Rosalía premiered in the Big Apple on this same stage, in the edition of the flamenco festival held in March 2018. Little more than four years later, Sant Esteve Sesrovires returns to New York with two concerts on Sunday and Monday in one of the city's most dazzling venues, Radio City Music Hall.

“For us this is a gift, a prize, and we know that it is a sporadic thing”, replies Joan Enric. “Singing in Catalan closes all international doors. We are very clear about our place, but we also did not want to give up the great dream that any band has the day it is formed, which is to travel, see places and play in those places”, emphasizes Joan Enric, who clarifies that they have toured a few countries Europeans.

“It's a double gift because there are people who come to the concerts, who are not Catalan but have learned the language and you see that they love our language”, adds Ferran. "We sing in Catalan and we have never considered changing the language, or making the effort to put a song in Spanish," he insists.

At Joe's Pub they even hold a referendum (“they don't let us do much) on what language to use when addressing the public. Catalan wins the majority. Those who do not speak it can be counted almost on the fingers of one hand. More than six thousand kilometers away, they discover that they are at home, as if this were Barcelona or Girona. Louisiana is far away tonight.