French player Stéphanie Frappart made her debut against Real Madrid in a match in which she had work to do from the start, scoring three penalties in half an hour. 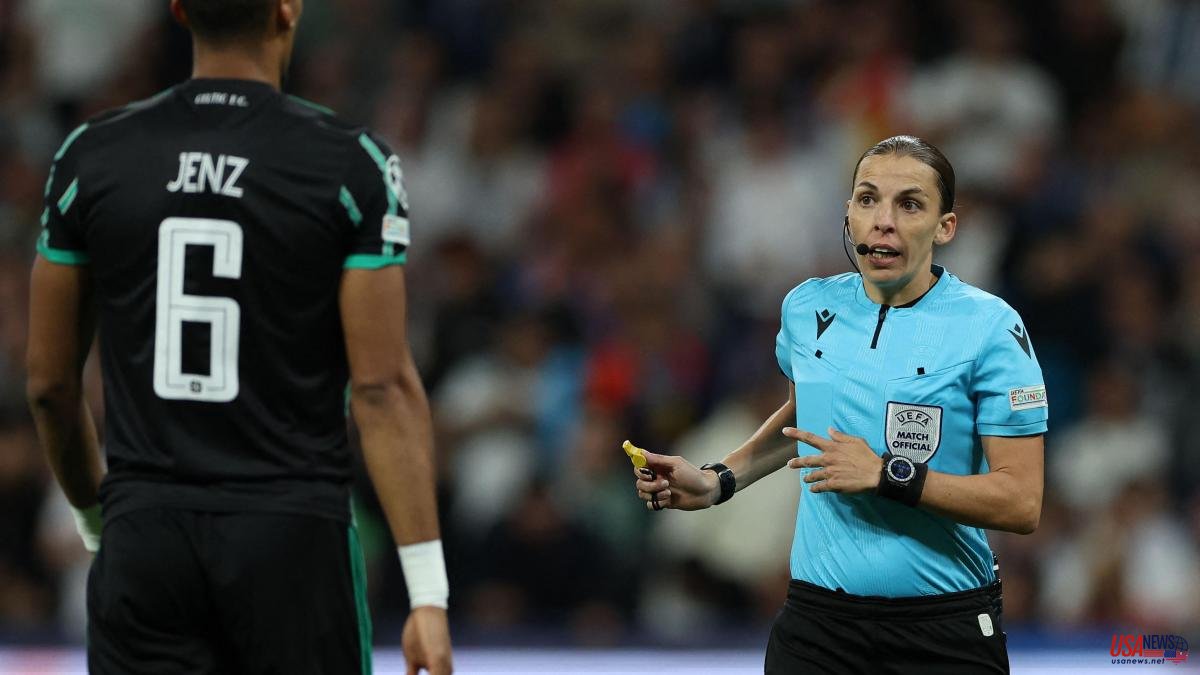 French player Stéphanie Frappart made her debut against Real Madrid in a match in which she had work to do from the start, scoring three penalties in half an hour. Only five minutes had been played when the referee signaled the first penalty of the night due to clear hands from Jenz, which Luka Modric was in charge of transforming into the 1-0. And it was not the only one, twenty minutes into the game, some new hands cost Celtic their second penalty. An action that has required the intervention of the VAR and that, after verifying it by the French referee itself, has been sanctioned with a new maximum penalty and Rodrygo has made it 2-0. Frappart would still have time to signal a third penalty, this time against Real Madrid, in the 35th minute, due to a hard tackle at the wrong time by Mendy. But fortune would continue to smile on the white team, as Courtois saved Juranovic's shot.

Frappart has today become the first woman to direct a match against Real Madrid, at least officially, as Carolina Doménech already did so in 2002 in a friendly against Atlético. In what is her second match as the main player in the Champions League, a competition in which she debuted in 2020 in a Juve-Dinamo kyiv match, the 38-year-old referee has added another page to her long career, consolidating herself in the arbitration elite.

Considered one of the best referees in the world - the IFFHS (International Federation of Football History and Statistics) appointed her in 2019 and 2020 - Frappart is highly respected by the players. She arbitrates with a firm hand, but always with a spirit of dialogue. They highlight her charisma and her strong personality, but also that you can always talk to her about green. "She has shown over the years that she is one of the best referees in Europe and around the world," praised Roberto Rosetti, UEFA's head of refereeing.

But if there is an adjective that defines it, it is undoubtedly that of pioneer. Frappart has been the first woman to referee in the highest category of French football (2019, Amiens-Strasbourg), the first to lead a men's Champions League match (2020, Juve-Dinamo kyiv) and the only one to have refereed a final of the European Super Cup (2019, Liverpool-Chelsea). At the end of the month, she will add another great milestone: being the first woman to whistle on it in a men's World Cup, after being designated for the Qatar 2022 World Cup.

Referee since she was 13 years old, international since 2011, Stéphanie Frappart became strong accumulating great performances in women's tournaments, including the 2019 World Cup final between the United States and the Netherlands. Her good work opened the doors of men's football, an environment more hostile to women. After five years in the French second division, she made the jump to Ligue 1 in 2019, the year in which she experienced the great emergence of her career.

He will turn 39 next month and arbitration is in his blood –several of his brothers also dedicated themselves to it-. “You have to be very passionate to stay in refereeing when you get insulted every weekend at the lowest levels. But I was stubborn as a mule, and I've always lived in a world of boys", Frappart explained to L'Equipe back in 2019, on the verge of debuting in Ligue 1.

A firm defender of equal opportunities, the Frenchwoman has earned a place among the best: “With the men, everything goes faster on the pitch. Trying to follow Mbappé at 37 km/h is not easy; the players are not going to slow down because I am a woman. The physical and technical demands are the same”, he acknowledged to the French newspaper.

Her name has already entered the arbitration history books, along with that of another referent such as the German Bibiana Steinhaus. In Spain we have not yet reached this level of excellence, but there are also proper names that are carving out a niche, such as Guadalupe Porras Ayuso, who this season made his debut in a Champions League refereeing team. The Extremaduran became the first Spaniard in September to serve as linesman in a match between Napoli and Liverpool.