An exceptional occasion, like this one of a classical concert broadcast to the world at the turn of the year, and during privileged hours, is obliged to respond under the same conditions. 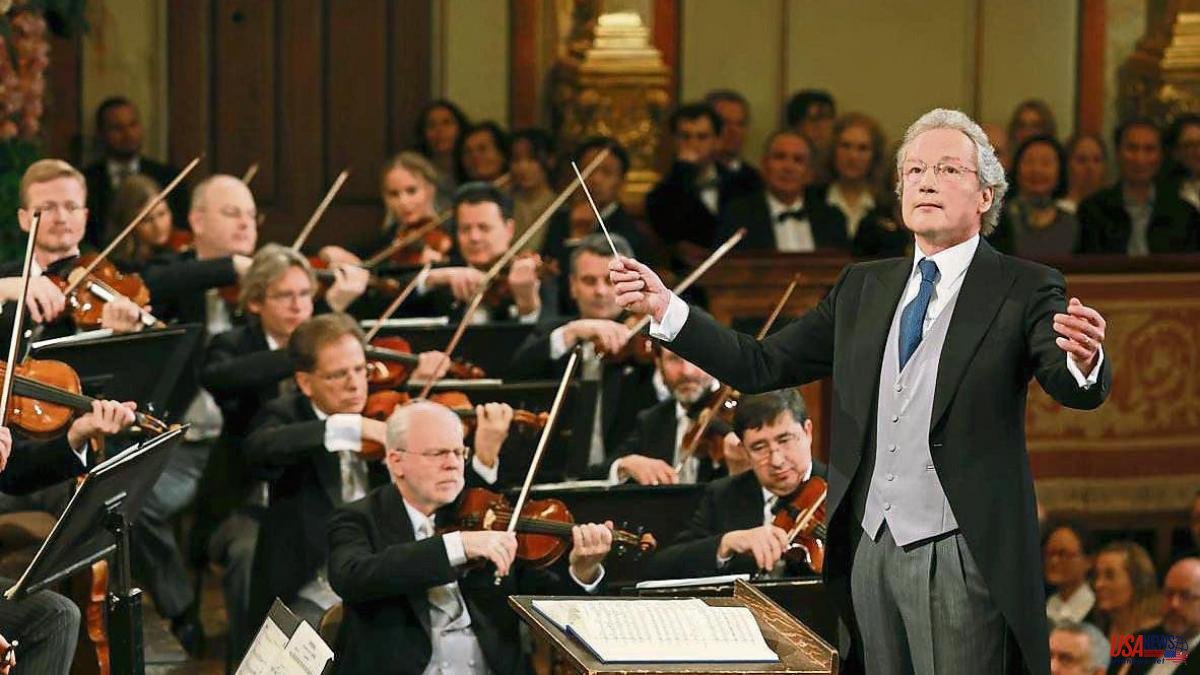 An exceptional occasion, like this one of a classical concert broadcast to the world at the turn of the year, and during privileged hours, is obliged to respond under the same conditions. Our official television channels, especially that of the common fund of RTVE, despite having its own orchestra (who would have thought, because it lives in a corner of Madrid and all of Spain pays for it), broadcasts concerts at dawn; good example... while the screens at midnight on the 31st are filled with vulgarities. Here it always generalizes downward.

Vienna offers a fantastic orchestra, generally with established conductors, and now that they are in short supply because a high-level generation is running out, it makes use, as on this occasion, of the controversial Frankly Möst, who has attempted his career in the Anglophone world, of the one that we receive samples, but more than musical excellence, good marketing.

He cultivates his image, to the point that in the broadcasts from Vienna (this is the third, and I hope the charm) he appears in the dressing room during the intermissions, always assisted by an efficient waiter.

He already has extensive experience on the podium and is a worker who believes in his trade and shows some virtues -the repertoire of his land, this one of waltzes and polkas, works well for him- he takes care of dynamics, seeks to rescue original pieces (in this case, some interesting pieces by Josef Strauss in which he showed agility and subtle traits in the last of the program, or in Hellmesberger's bell polka). He also treated von Suppé's overture to the second part of the program with distinction.

It is curious to see how in the same Musikverein these pieces are displayed, even the Spanish jota by Von Suppé, while in our concerts playing preludes, overtures or interludes by Vives, Chapí, or others from the world of zarzuela seems to make the audience blush. programmers.

This Vienna New Year is full of symbolic elements that television exploits. Interesting allusion to the 150th anniversary of the Universal Expo of 1873, in connection with which the announcer mentioned Seville, but he did not mention the two great ones here that left their mark, especially the one in 1888 or 1929. Regarding symbols, it is worth noting The Radetzky March has been somewhat fixed, removing airs of Hitler Youth, but deep down it continues to sound offensive to those who have respect for history and human rights. And they won't stop applauding. And that without a doubt will be reinforced in its structure next year with Mr. Thielemann.

There are few musical elements more to highlight in this somewhat bland concert, with nods to the important Angelika, Josef Strauss's French polka, and also the director's wife and very influential in the Philarmonie, whom the camera also underlined.

In short, Franz Welser-Möst has once again shown his abilities, with a certain distance on the podium in terms of nuances and energy, and the impersonal face of a good student who lets the orchestra play, with whom he shows a good relationship, possibly because he does not impose authority and does not have much to say. Unfortunately, except for von Suppé's work, there was no score with a face and eyes to show personality, as if the audience could be overwhelmed by a good concert overture.