The protests of hundreds of workers at the main iPhone manufacturing plant in China during the early hours of Wednesday, whose images of the violent crackdown by security personnel and the police circulated around the world, have had their effect. 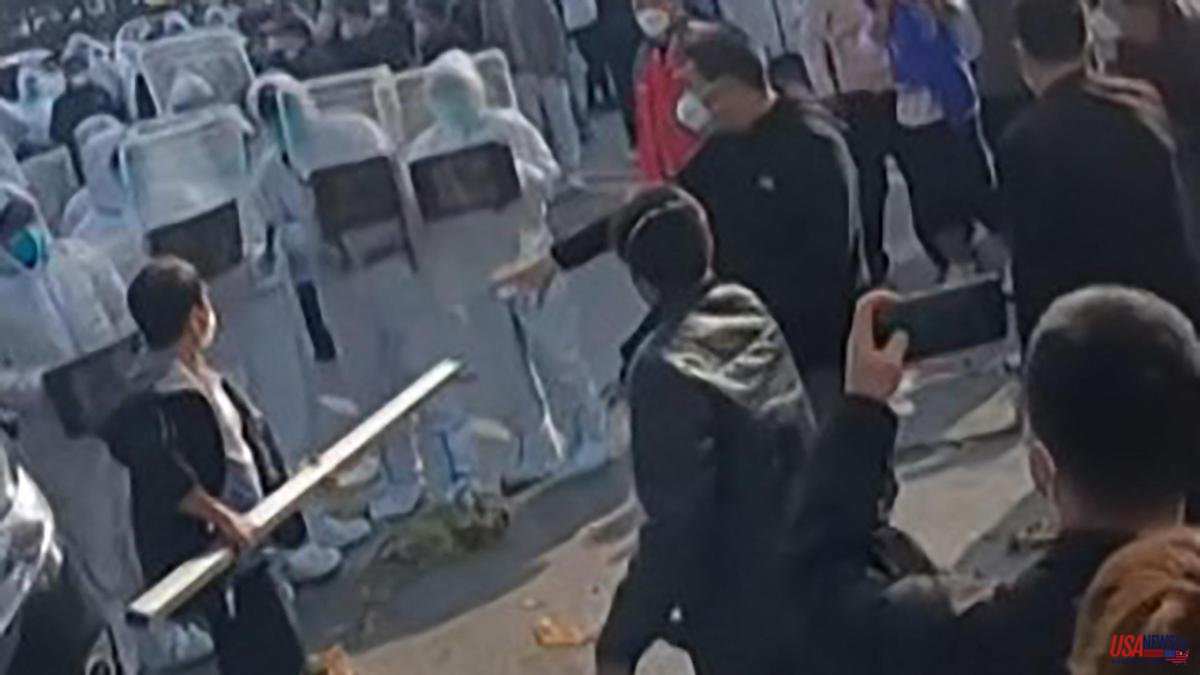 The protests of hundreds of workers at the main iPhone manufacturing plant in China during the early hours of Wednesday, whose images of the violent crackdown by security personnel and the police circulated around the world, have had their effect. Foxconn, the Taiwanese supplier, has apologized to its employees this Thursday for the "technical error" that caused the discomfort of its staff who were demanding the payment of the salary that they had been promised to attract them to the factory.

Apple's manufacturing partner has offered to pay 10,000 yuan (about 1,344 euros) to newly hired staff who decide to leave their post and has promised to honor salary agreements, in an attempt to quell protests over what appear to be contract disputes. Their demonstration came at a time of high tension at the plant in the city of Zhengzhou, where 200,000 people work, most of the employees have been in isolation for almost a month under harsh health restrictions aimed at quelling the latest coronavirus outbreak.

"Our team has been investigating the matter and discovered that a technical error occurred during the onboarding process" of staff, Foxconn said in a statement, referring to the hiring of new workers. "We apologize for an input error in the computer system and we guarantee that the actual salary is the same as the one agreed and the official contract terms," ​​the company said.

Foxconn management sent its economic proposal to workers on Wednesday night while asking its staff to return to their dormitories located inside the factory complex, according to the Financial Times and local economic media.

The pay is intended to cover money owed to new workers for quarantine, transportation to the factory and hours worked, the company statement said. Those who accept the deal will receive 8,000 yuan when they resign and the remaining 2,000 yuan after boarding the buses home.

In an attempt to rebuild its workforce after thousands of resignations last month over complaints about poor conditions at the plant during the lockdown, Foxconn made a job offer promising 25,000 yuan (the equivalent of 3,360 euros) for two months of work. in the factory. The offer attracted hundreds of workers from all corners of China, but eventually there were doubts that it was going to be fulfilled, which led to the start of the riots. Specifically, Foxconn required them to do extra work as a condition of receiving the higher salary promised by recruiters.

The Communist Party is trying to contain a rise in coronavirus cases without shutting down factories, as it did in 2020 at the start of the pandemic. Its tactics include "closed-loop management," which isolates workers for long periods at the facility to prevent contagion from outside and maintain production. This has sometimes caused protests due to poor sanitary conditions or the lack of food in various factories in the country, but Foxconn's are often the most notorious, due to the repercussions on the production of Apple's smartphones.

China is going through one of the worst moments in managing the covid marked by record infections and lockdowns in cities across the country that fuel frustration among the population and darken the outlook for the world's second-largest economy. The latest case count of 31,444 on Wednesday surpasses the annual record set on April 13, when the country's commercial powerhouse Shanghai was paralyzed by a two-month lockdown of the city of 25 million.

This time, the large outbreaks are numerous and spread across the eastern and southern parts of the country. The largest are in the southern city of Guangzhou and southeastern Chongqing, though hundreds of new infections are being reported daily in cities including Chengdu, Jinan, Lanzhou and Xian. As for Zhengzhou, the city that is home to Apple's largest factory, a total of 6.6 million residents across eight of its districts are required to stay home for five days.