Forn asks Junts and ERC to "separate partisanship and personalism"

“I ask everyone to put aside partisanship and personalism, everyone. 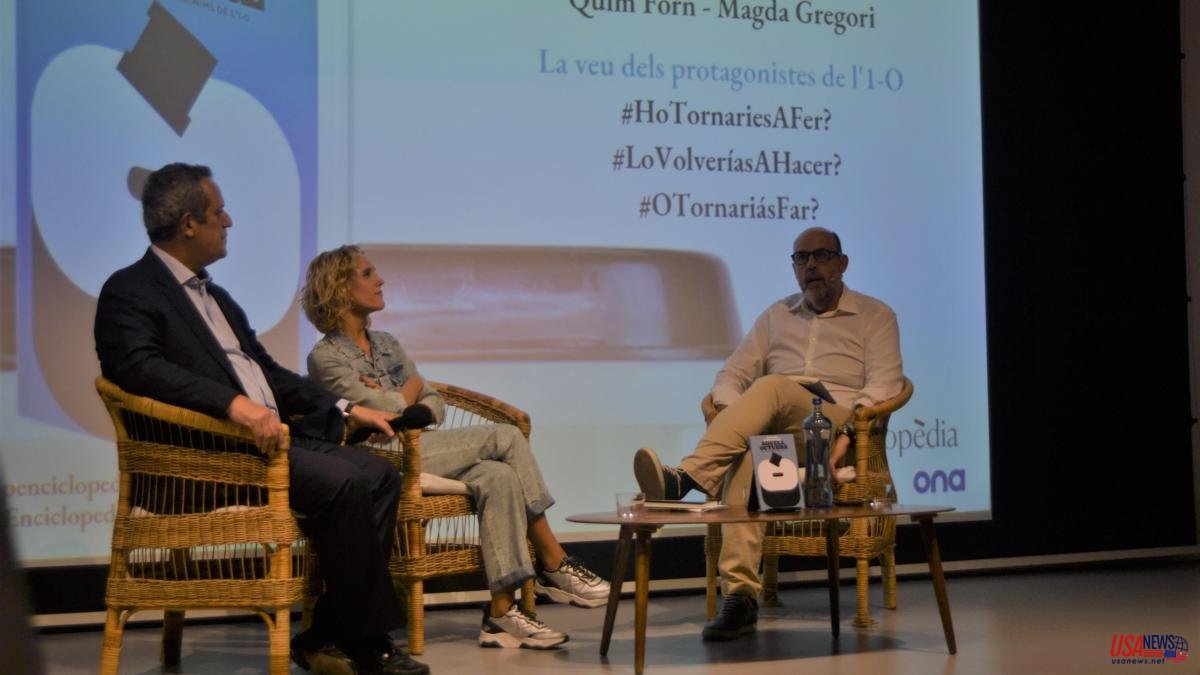 “I ask everyone to put aside partisanship and personalism, everyone. And when we are independent we will already be partisan ”, the former Minister of the Interior Joaquim Forn requested this Thursday, referring to the Junts and ERC crisis. At the presentation of his book That October. Les veus dels protagonists anònims de l'1-O (Enciclopèdia), Forn, a member of Junts, who served almost four years in prison for 1-O, has demanded that the Govern parties carry out the talks to resolve this crisis “the people most favorable to the agreement”. "Without a minimum unit there is nothing to do. That is what I would ask everyone to do," he said, admitting that everyone has their share of responsibility in this crisis that is dividing the Government. He has also stressed that he trusts the general secretary of Junts, Jordi Turull -with whom he shared the Government and with whom he was in jail- and other people who are not from the party to channel the situation. “That they do it for the people who made the referendum possible”, he has requested, while the Junts executive was still meeting to make a decision on his continuity in the Government.

Political news was thus filtered into the presentation of a book dedicated to civil society that made the device of the independence referendum possible. It was the journalist Jordi Basté, who led the event, who asked Forn the question about the crisis between the partners of the Government of the Generalitat. "What a day to present the book!", The former minister had admitted minutes before, amid the laughter of the attendees, gathered at the Ona bookstore in Barcelona. “But it is the best day, it is a tribute to the people who made it possible”, he added. Next to Forn was the journalist Magda Gregori, co-author of the book. While all this was happening, the Junts executive was meeting at the party's headquarters, debating whether or not to leave the Government, after President Pere Aragonès yesterday dismissed the vice president, Jordi Puigneró.

Basté opened the event by recalling his own experience as a voter on 1-O, for which he traveled to Castellbisbal, given the queues to vote in Barcelona. "Each one has a novel to write about that day," he assured. "The political situation is what it is, but 1-O is a bestial victory," he assured.

Next, the two authors have explained some anecdotes about the preparation of the book, for which they interviewed 200 people who anonymously collaborated in the device to guard the ballot boxes and send them to the polling stations on October 1. Forn has highlighted the strength that it gave them, while they were in jail, to remember the illusion and the desire that people gave him that day. "In the moments when we were low, seeing the images of that day gave us strength," he has confessed. "I was surprised that there were people who lived together and kept ballot boxes and ballots and did not say anything until the day of the vote," Magda Gregori recalled.

In 115 pages of agile reading, the book reconstructs, through the 200 testimonies collected, how the device was put into operation as of June 2017 to celebrate a referendum that had been declared illegal by the Constitutional Court, for which they had to act clandestinely.

Secrecy, caution, encrypted messages, secrecy, zero contact... This is not an espionage novel but the story of how several hundred anonymous volunteers made the logistics of 1-O possible five years ago, culminating when the ballot boxes reached the schools and at the end of the day the count could be made.

Among the testimonies, some recount how they were contacted directly or through encrypted messages, and were designated as 'zero contact'. As in a pyramid, their function was to each choose different people of their highest confidence to assign them certain functions of the operation that guarded the ballot boxes -on false ceilings, on roofs, on tractors and in countless hiding places- in the face of the risk that were requisitioned in a possible police search and he was in charge of sending them to the polling stations throughout the country