Forcadell, booed during her speech in the unitary act of 1-O in Arc de Triomf

The former president of the Parlament, Carme Forcadell, has been booed and whistled at this Saturday in the unitary act that commemorates in Barcelona, ​​at the Arc de Triomf, the fifth anniversary of the 1-O referendum. 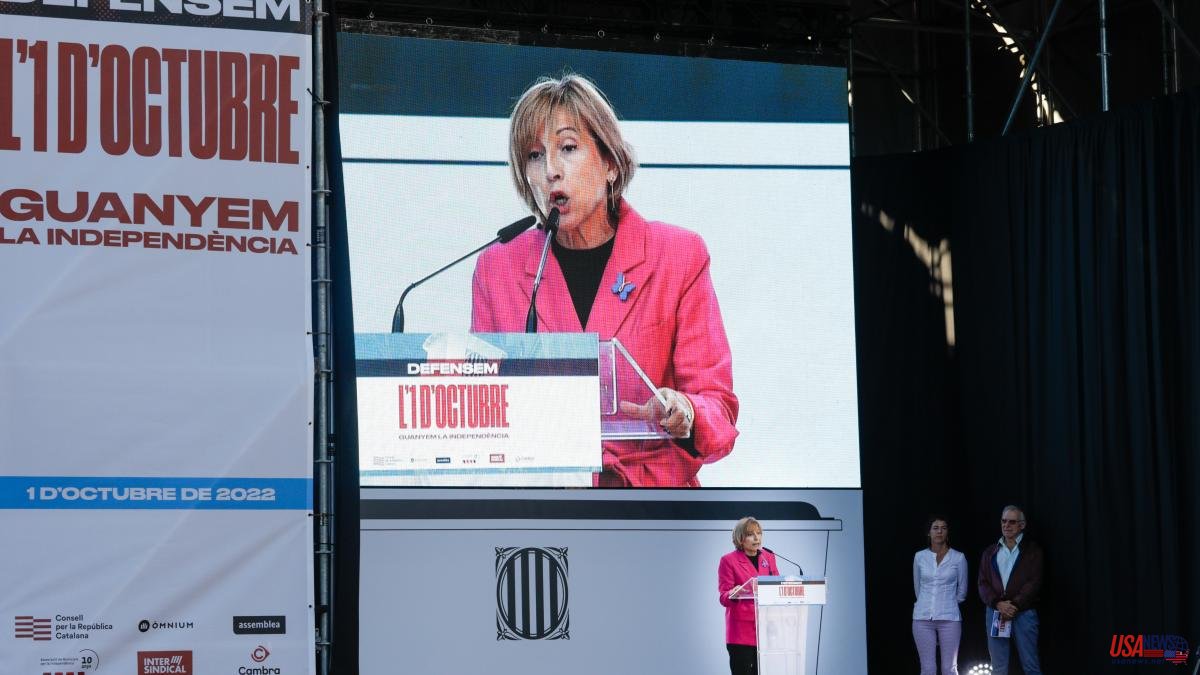 The former president of the Parlament, Carme Forcadell, has been booed and whistled at this Saturday in the unitary act that commemorates in Barcelona, ​​at the Arc de Triomf, the fifth anniversary of the 1-O referendum.

She was the first political leader to speak from the stage, before some 11,000 people, according to the calculations of the Guàrdia Urbana. During her intervention she has been whistled at for a long time and continuously. In addition, cries of "Aragonès resignation!", "Govern resignation!", "Out, out!", "Traitor!" or "enough is enough!", for her to finish her speech, in which she has asked that the fights between independentists be left aside.

Forcadell, who was hoarse, has called for a common strategy of the independence movement: "Let's stop fighting, lamenting each other. Let's forget the reproaches and work together for a new opportunity."

Before the beeps during his intervention and the shouts, Forcadell has said that he shares the disappointment: "You are disappointed: I understand it and I share it. In 2017 we had it so close, that I also feel that way. But I am happy because I see that you are still mobilized ".

Before the act started, the presenter referred to the Catalan politicians who live abroad and Marta Rovira, also from Esquerra, like Forcadell, was also praised, while Carles Puigdemont received the most applause.

Maties Serracant, mayor of Sabadell of the CUP in 2017, who has asked for room for dissent and doubt and has also been booed by a few.

Another of the booed and whistled was the president of the Association of Municipalities for Independence (AMI), Jordi Gaseni (ERC), when he asked for a "strong government" for the municipalities and that the crisis of the Generalitat be resolved between Junts for Catalonia and the Left. "¡Puigdemont, nuestro president!", was one of the cries that have been shouted from the public to cover up his intervention since he referred to the Catalan Executive.

Xaviert Antich, president of Òmnium, later joined the club of booed and booed leaders, who stressed that there is no alternative to the entente between the different sensitivities of the independence movement and has shown his willingness to collaborate.

At this Saturday's rally called by the pro-independence organizations - Council of the Republic, Òmnium, Catalan National Assembly, AMI, the Intersindical union and the Barcelona Chamber of Commerce - representatives of all parties, Junts, ERC and the CUP attended , and the councilors of JxCat in a moment of crisis between the two partners of the Government.