Ferran Torres: "I don't know if we are candidates, but we are going to make things difficult"

It was said that it did not arrive with the names of yesteryear, with world-class players, but when push came to shove, at the premiere of the World Cup in Qatar, Spain achieved a history-making win against Costa Rica (7-0), the The most bulky of the team in a World Cup tournament, and Ferran Torres stood out in the list of scorers with two goals, the first from a penalty. 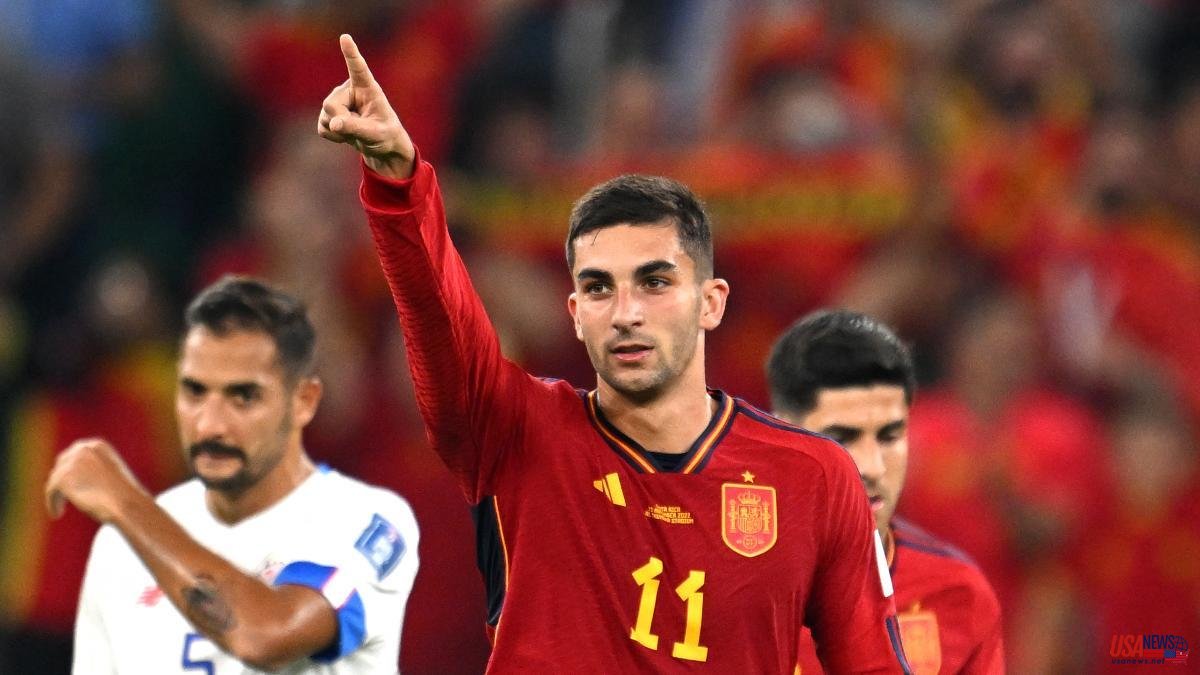 It was said that it did not arrive with the names of yesteryear, with world-class players, but when push came to shove, at the premiere of the World Cup in Qatar, Spain achieved a history-making win against Costa Rica (7-0), the The most bulky of the team in a World Cup tournament, and Ferran Torres stood out in the list of scorers with two goals, the first from a penalty.

"We have gone for more goals, in a World Cup they are valued more. In all the games we try to play from the first minute to the 90th minute as we want and today we have achieved it," said the Barça player in La1, starting against the Costa Ricans and author of the third and fourth goals of the match played at the Al Zumama stadium.

'La roja' came among the candidates for the title, but perhaps a step below other favourites. However, the win has triggered euphoria over the expectations of the Spanish team, which signed the most brilliant performance and the largest win so far in the World Cup. The next rival will be the fearsome Germany, defeated against forecast by Japan in the first day (1-2).

"We have to take the game where we want. We'll watch their videos to see how they play. We have to show the excitement and desire we have to play," said the man from Foios about the duel against the Germans, where they could mathematically get through to the round of 16 if they win. "I don't know if we are candidates for the title but we have an extraordinary group, we are going to make things difficult and we want to do something big," he concluded.

He also had several reasons to smile at Alejandro Balde, debuting in a World Cup at the age of 19. "We couldn't start in the best way (...) It's been a dream. Being here with world-class players... the coach congratulated me," said the Barça side, as well as noting that they had a "clear idea from the beginning, that of the coach" and they have "come out to death". "Spain is always at the top of the national teams, but step by step, don't worry, I'm sure everything will go well," concluded the defender, who entered the field in the 64th minute.

"I think we've had a great game from minute 1. We knew it wasn't going to be easy, at least until the first goal. The key was to control the game from the beginning," said Dani Olmo, scorer of the first goal, who pointed out the weather conditions: "The heat has also affected them".

In the same way as his teammates in the national team, the Red Bull Leipzig striker lowered the soufflé about Spain's aspirations and focused on the next match, on Sunday: "There is a lot left. We are happy and now it's time to think about Germany. We must face the match against Germany as a final because they are risking everything".

Another debutant at the World Cup and also a goalscorer was Carlos Soler, who scored the sixth goal shortly after entering the field. "We didn't imagine such a comfortable victory. The group has deserved it. Everything has worked out for us from the beginning. At the break we talked about the goals being important. The more goals the better", analyzed the PSG man.

"It's normal for there to be euphoria now, but we have to be cautious. Even if they lost, we know what Germany is," the Valencian repeated the idea, who also praised the coach, Luis Enrique: "The group is very happy because everyone they see themselves as starters, everyone believes they can have minutes. We are all super happy with the coach and the coaching staff".

King Felipe VI, who has witnessed Spain's first game in Doha, has been the luxury guest in the locker room after the match. The monarch went down to the changing rooms to congratulate the team on the victory and added praise for the great game they played: “In my life I have attended a game, especially for the national team, with a result like this. We have enjoyed it, like everyone else, but beyond the result, watching you play has been a real joy”, he said in a brief speech addressed to the entire squad. The king has even joked with Luis Enrique, when he said that he had not seen any mistakes in the team's game, but that would have to be determined by the coach.