In mourning and outside of Spain. 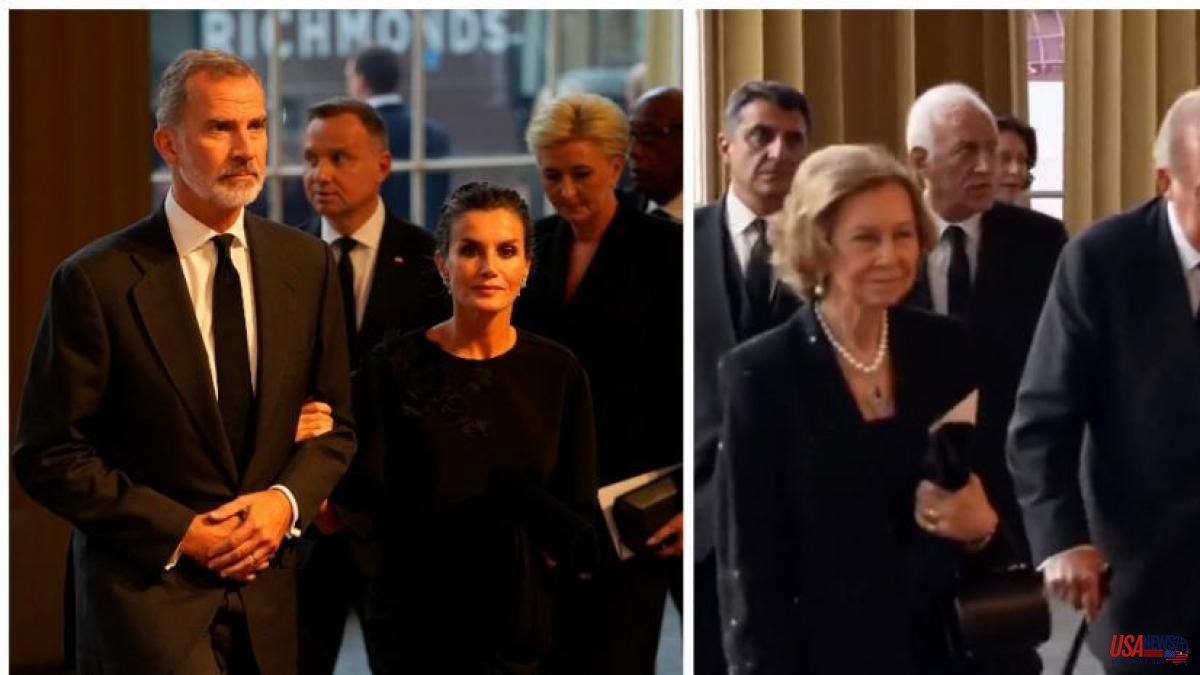 In mourning and outside of Spain. Elizabeth II's farewell has facilitated the reunion, in London, of Felipe VI and his father, King Juan Carlos, who, along with Queen Letizia and Queen Sofía, met yesterday afternoon at Buckingham Palace during the reception that Carlos III offered to the foreign guests who today attend the funeral for Isabel II. The King and his father will meet again at the funeral ceremony at Westminster Abbey but, in accordance with British protocol, they will sit separately.

Yesterday, there was no joint appearance upon arrival at the reception, nor an image of the King and Queen together with Juan Carlos and Sofía inside the palace, but yes, and for the first time since, in January 2020, they were at the funeral by the Infanta Pilar, the King's parents were seen together. Since King Juan Carlos left Spain on August 3, 2020, they did not coincide in the same space since Juan Carlos was for a few hours in the Zarzuela, after his stay in Sanxenxo (Pontevedra), although they have maintained contact by video call, as confirmed by close friends.

Queen Sofía, who traveled from Madrid on the official Air Force plane together with the King and Queen and the Minister of Foreign Affairs, José Manuel Albares, went, after landing at the London airport, to the hotel where the King Juan Carlos who arrived in the British capital from Abu Dhabi. Later they went together to Buckingham Palace and once the reception was over they returned to the hotel where they are both staying luida la. Felipe and Letizia and the head of Foreign Affairs went to the Spanish embassy, ​​where they spent the night last night.

As official representatives of the Spanish State, Felipe and Letizia, like other heads of state and world leaders, attended the funeral chapel of Elizabeth II installed in the Palace of Westminster. Dressed in mourning and accompanied by Minister Albares and Ambassador José Pascual Marco, they remained for a few minutes on a kind of platform placed for the occasion, at the same height as the coffin of Elizabeth II, while citizens continued to pass after queuing for hours.

British protocol established several meeting points to transport guests to the reception on board coaches. There were exceptions, the president of the United States, Joe Biden, that of France, Emmanuel Macron and the Sultan of Oman did it by car.

Juan Carlos and Sofía arrived in one of the vehicles forty minutes before the arrival at the Buckingham yard of the coach that was transporting the Kings, so the two couples entered the building separately. The Kings of the Netherlands, William and Máxima, entered Buckingham together with Princess Beatrice and the Emperors of Japan. The meeting between the King and Queen and Juan Carlos and Sofía, of which images were not provided, took place in the room where the reception presided over by King Carlos and Camila took place, in the company of the Prince and Princess of Wales.

At all times, the Zarzuela has submitted the initiative for the development of the different acts to the British protocol and both the Kings and Juan Carlos and Sofía have adjusted to it. According to the information provided by the organizers, the King and Queen will sit tomorrow during the funeral at Westminster Abbey, a block of benches intended for the heads of state, while Juan Carlos and Sofía will do so together with members of other attending royal families. to the ceremony.