Feijóo removes the possibility of a motion of censure but warns: "Spain is not going to give up"

Alberto Núñez Feijóo imposes his mark and is not going to be carried away by the rush of those, such as the president of Cs, Inés Arrimadas and the leader of Vox, Santiago Abascal, summon the PP to present a motion of censure against Pedro Sánchez for the abolition of the crime of sedition, or the formulas used by the far-right party to oppose the Prime Minister, such as street rallies. 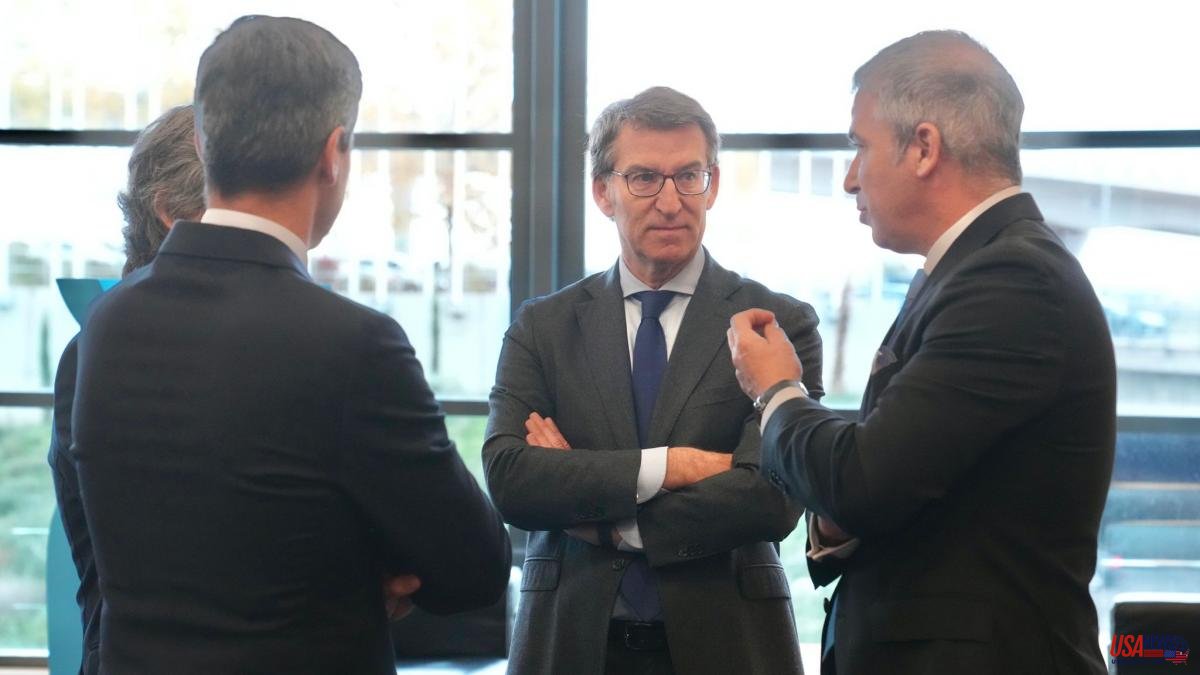 Alberto Núñez Feijóo imposes his mark and is not going to be carried away by the rush of those, such as the president of Cs, Inés Arrimadas and the leader of Vox, Santiago Abascal, summon the PP to present a motion of censure against Pedro Sánchez for the abolition of the crime of sedition, or the formulas used by the far-right party to oppose the Prime Minister, such as street rallies.

The president of the PP does not want to play in the short term, or to the photo, in the situation that has been caused and that he himself considers to be "enormously serious", but instead tries to face the situation from the strength that being the main opposition party and the only one that, if it wins the elections, could propose the formation of an alternative government to Sánchez's".

For this reason, this Tuesday, Feijóo responded to the demands of Arrimadas and Abascal that he present a motion of censure with a simple phrase: "What is important in democracy is not only the government that we have at a certain moment and its delusional decisions, but the possibility of changing government.

He did not mention sedition, or embezzlement, he did not even pronounce the words motion of censure, but to the best of your knowledge, a few words are enough, and Feijóo was enough to distance himself from the reaction of the other two parties of the center and the right to the intentions de Sánchez to modify the Penal Code, with the consequent benefit for the Catalan pro-independence politicians convicted by the Procés.

The place where Feijóo spoke did not allow for many explanations or grandiloquent words that would capture an attractive headline, since he was at the inauguration of the congress of the National Association of Vehicle Sellers and Repairers. He spoke to them about the economy, the importance of the sector and that they should not give up their claims to enter the PERTE of the automobile.

And there, Núñez Feijóo was able to make his comparison with what is happening in the political arena, with the reform of the Penal Code for the crimes of sedition and embezzlement. "Whatever happens, Spain is not going to surrender to certain decisions," said the president of the PP, with which everyone understood what he was referring to.

With these statements, Alberto Núñez Feijóo wants to show that no one is going to mark his way of doing politics, but that his decision not to take the most striking measures, as Cs and Vox demand, does not at all detract from his determination to oppose to government measures. And he is going to do it with the formulas that he considers most effective. Firstly, as he announced on Monday before the Executive Committee, with an amendment to the entire PSOE and United We Can proposal, and secondly by making a type of opposition, which he considers more effective, which is showing people that it is possible another way of governing, an alternative to that of Pedro Sánchez, and that is the one he heads.

A position for which he has the support of the national leadership of the PP, and especially of his barons, who yesterday applauded Feijóo's autonomy when making decisions, without dwelling on what the others do or say, "or who yell more." The objective is to reach the elections having shown that there is an alternative and that citizens support it because they believe that it is better for them and for Spain.

That is why the rest of Feijóo's speech at the congress of car dealers and repairers focused solely on economic issues, with criticism of the way in which European funds are being managed, and with the defense, once again, of an "extraordinary and temporary" tax cut, which affects families, deflating the personal income tax rate, and lowering "selective taxes" for certain companies, SMEs and the self-employed.