Alberto Núñez Feijóo could not have been put more in the face of the National Executive Committee of the PP. 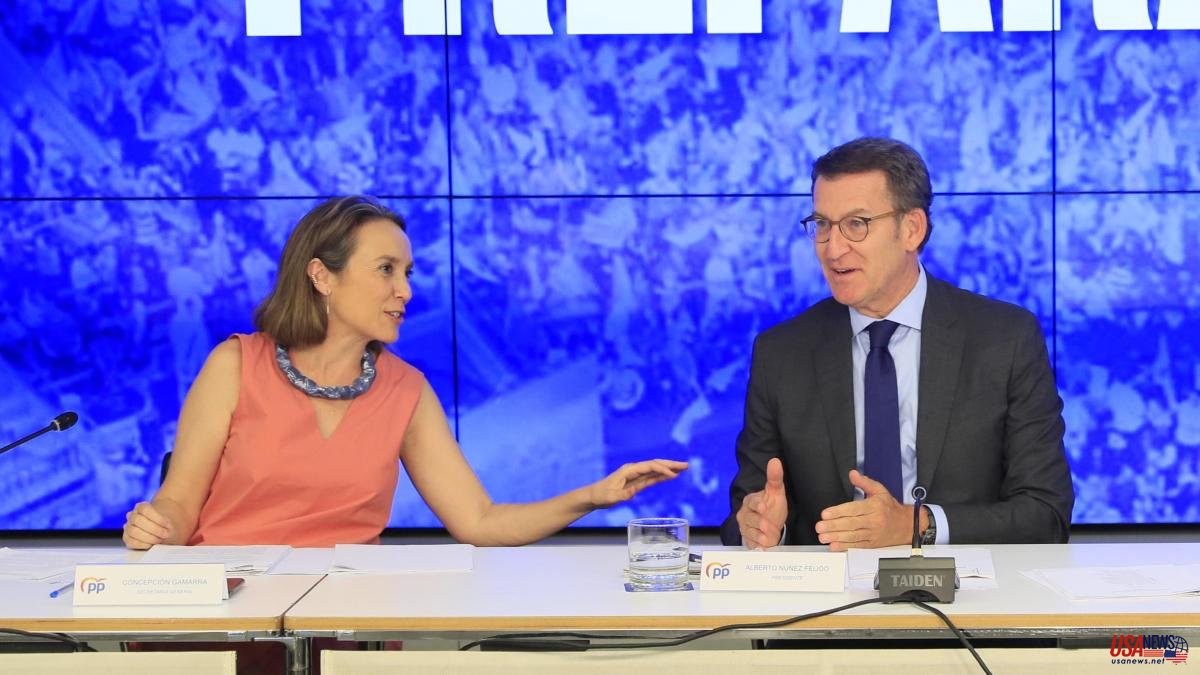 Alberto Núñez Feijóo could not have been put more in the face of the National Executive Committee of the PP. The confirmation by the Supreme Court of the sentences set by the ERE case, including that of former Andalusian presidents Manuel Chaves and José Antonio Griñán (PSOE), was known just a couple of hours before his intervention. But the Galician has preferred to maintain his roadmap and not use, at least exclusively, the setback received by the Socialist Party to harangue his own and conspire for the 2023 electoral cycle.

After a first paragraph to show the support of the PP to all the communities hit by the wave of fires that Spain is suffering at the moment, the president of the PP has made direct mention of the ruling of the ERE of Andalusia for, to the applause of his fellow party members, to warn that he is not going to use it to discredit the PSOE, "although this party has done so on previous occasions" against his party. "Because my goal is not to be like Pedro Sánchez", he has set as the plot line. And from then on he has already chained attacks on the government he intends to evict from Moncloa in an "unstoppable change that", he ironically, "already recognizes even the CIS".

Feijóo understands that "justice has passed sentence and so have the polls" - in reference to the recent Andalusian elections - and now "it is up to the PSOE to make decisions and purge responsibilities in its ranks," he said. But the Galician has insisted on reinforcing the message that "politics is a noble activity" for which he has asked his colleagues to redouble "the commitment to honesty". Quality that he, he assures, possesses most of the PSOE charges, he has pointed out to delve into his fair play proposal after the conviction confirmed by the Supreme Court.

The leader of the PP has predicted that the head of the Executive, Pedro Sánchez, will raise "the tone" and will dedicate the final stretch of the legislature to "using all the resources of the State" to "stop the change" of the Popular Party. However, he has ruled that it is "impossible" for him to recover the initiative because Spain "no longer listens to him" because it does not "believe" him.

The leader of the opposition has indicated that justice has condemned two former presidents of Andalusia and 16 former senior officials of the socialist government of this community for corruption and has shown that the Board "used public money to use it for political and electoral interests" .

"It has been confirmed that this is the largest case of corruption in democratic history in recent years, with 680 million euros involved," he emphasized. But, despite this case, he has specified that "the vast majority of political positions" in the country are "honest people, also those of the PSOE."

Feijóo's diagnosis indicates that "Spain needs a much more sensible, responsible, predictable and compact government than this gibberish and our obligation is to offer it. Pedro Sánchez has already focused on opposing the alternative and we are focused on preparing a government" , has emphasized as an alternative.

The day has been placid in Genoa. Various regional leaders of the PP have claimed this Tuesday that the alternative championed by the leader of the formation, Alberto Núñez Feijóo, has permeated the public and they are convinced that he will govern when the elections are called, in front of the Prime Minister, Pedro Sánchez , focused only on his "personal situation" and "finding blame" for the problems when he is ultimately responsible for the country's situation.

This was indicated this Tuesday at the entrance of the National Executive Committee of the PP, the president of Murcia, Fernando López Miras, defending that the popular ones are not going to stop working in the face of the situation in the country, which is getting "worse" for families and companies by Sánchez's management.

Along these lines, the president of the PP in Castilla La Mancha, Paco Núñez, has pointed out that even the Sociological Research Center itself recognizes the victory of the PP leader in its last poll, ironically that he hopes that the result of that poll does not lead to the "cessation" of its president, José Félix Tezanos, because they already know how Sánchez behaves when he "does not like" how the organizations act.

Núñez has stressed that the polls "are favourable" but they also show the photo of a specific "moment", so they expect Feijóo to continue marking the path of work, strengthening the unity of the party and giving confidence to the regional positions, such as has deployed to date.

Likewise, the Galician president, Alfonso Rueda, has praised that the PP has managed to "regain hope", given that the polls "prove" that it is possible to govern when the elections are called. Feeling that, according to him, is in the game and also "in the street."

Consequently, Rueda has argued that the way out of the crisis will not come from the "triumphalism that Moncloa wants to sell" with "rushed" measures that, in addition, the autonomous communities will have to execute.

In fact, he has criticized that one thing is to announce initiatives from the rostrum of Congress and another is to later "land" them so that they are "useful" for the people, especially when they are "badly thought out" and the ultimate responsibility of applying them to the communities.