Feijóo definitely leaves Galicia when he is appointed senator 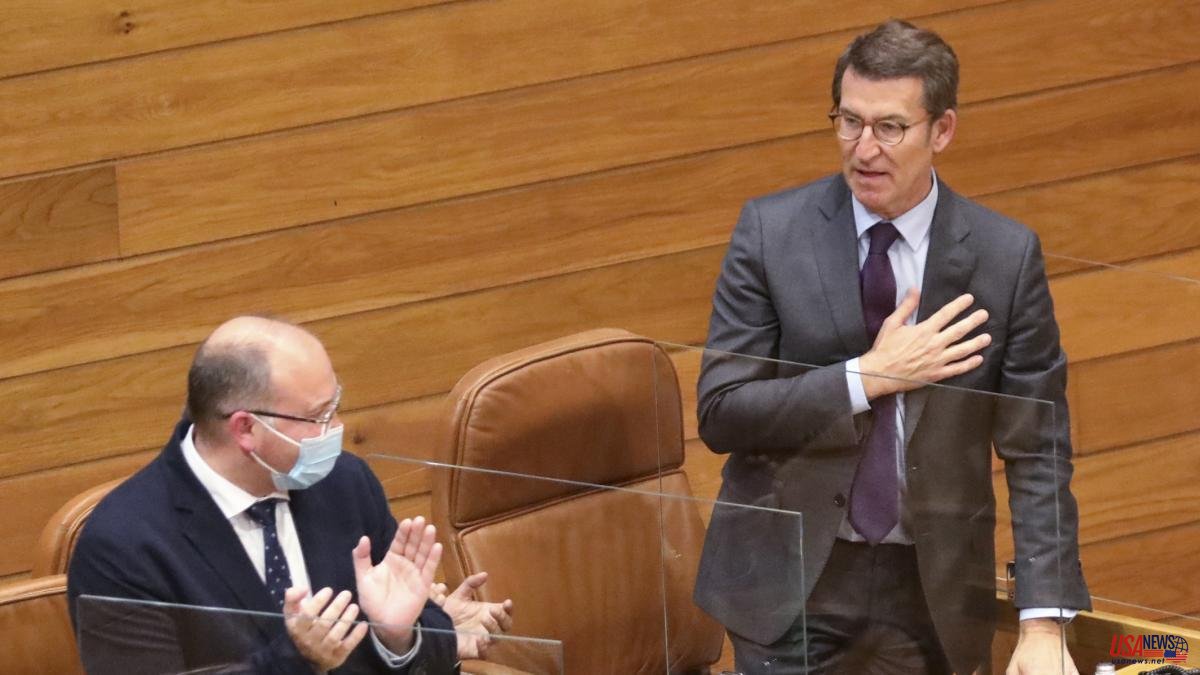 From the scandal over the supply of material to clean the Prestige tarmac to the scandal over the commissions charged by the brother of the president of the Community of Madrid, Isabel Díaz Ayuso, for the purchase of pandemic masks. The nineteen years that elapsed between these two cases correspond to Alberto Núñez Feijóo's cycle in the front line of Galician politics, who this afternoon was elected senator by regional appointment with the votes of the absolute majority of the PP, while PSOE and BNG They refused to vote for him.

After more than six years in Madrid as a senior position in the Aznar Government, Feijóo returned to Galicia in 2003 to replace Xosé Cuíña as Minister of Territorial Policy, one of whose companies had sold material to the administration for cleaning the affected beaches. by the oil slick, in a case that the dismissed person's entourage always claimed was a trap. And in 2022 Feijóo managed, after long years waiting for his moment, to make the leap to the presidency of the PP in Spain after the collapse of his predecessor in office, Pablo Casado, in his pulse with Díaz Ayuso around the scandal of the masks.

At four o'clock this afternoon Feijóo occupied what was his seat between the beginning of 2006 and the end of 2008, when he served as head of the opposition of the PSOE and BNG coalition Xunta. It was a matter of a few minutes, enough to follow the vote, deposit the ballot with his name and that of Miguel Tellado, who is also part of the leadership of the PP in Spain, in the ballot box, and to finally receive the final ovation from his colleagues . Feijóo and Tellado were appointed senators with 41 votes in favor, while 33 deputies from BNG and PSOE did not vote for them and there was a popular absence. Later both resigned as deputies of the Galician Parliament.

Farewells are a Galician specialty. The most famous poem of Galician letters, Goodbye rivers, goodbye fontes (fountains) by Rosalía de Castro speaks of them, as well as the most iconic image of Galician photography, of a lacerating transatlantic family separation in the port of A Coruña. Feijóo's dismissal has been marked by the fact that it is a long-term process, which began in February, when it became clear that he was the only alternative to chair the PP in Spain, as he confirmed in early March. He continued with his resignation at the head of the PPdeG and the Xunta, continued with the investiture of his successor, Alfonso Ruda, and ended yesterday with his departure from the Galician Parliament with the act of elected senator under his arm.

This is the third president of the Xunta who, after leaving office, goes to the Upper House, by this same route of the autonomous designation, that of the seats that correspond to Galicia by population, since they are one for every million inhabitants or fraction. In this case, with 2.7 million, there are 3 senators, 2 from the PP and one from the PSOE. Before, the socialist Fernando González Laxe and the popular Manuel Fraga Iribarne were in the Upper House. Although they are not at all similar precedents, since they fit into the function of the Senate as an "elephant graveyard", of politicians in retreat or at least defeated.

Feijóo's has no equivalent as it will enter the Senate tomorrow with the aim of being a platform to reach the Moncloa Palace, in the hope that it will allow him to confront the President of the Government, Pedro Sánchez, in addition to providing him with some income and appraisal in the Supreme Court. Last weekend he announced that he is registered in the capital of Spain, as is logical since it is already his place of residence. But this procedure supposes that he loses the Galician political condition, according to the Statute of Autonomy.

The head of the opposition, the nationalist Ana Pontón, yesterday considered it a "scandal" and assured that in "politics not everything is valid." She pointed out that instead of representing Galicia, as planned, she understands that Feijóo wants to "have immunity and save two salaries for the PP."

"There were Galician presidents such as Manuel Fraga or Fernando González Laxe who were senators by autonomous appointment after being president, but they did not adulterate the position or deviate from their functions," the parliamentary spokesman for the PSde-PSOE, Luis Díaz, also stated on Monday. who assured that Feijóo's objective in the Upper House is to try to "wear Sánchez down and, incidentally, to woo the extreme right of Vox."

On the other hand, the new general secretary of the PPdeG, Paula Prado, who has replaced Miguel Tellado, maintained that the opposition leader in the Senate is "compatible" and represents Galicia. She affirmed that Feijóo is the ideal person to represent Galicia with four absolute majorities behind him and 13 years at the head of the Xunta.

In any case, Galician politics definitively entered a new phase this afternoon, the post-Feijóo phase. In it, the PPdeG is seen to be somewhat less melancholy than a few weeks ago, due to the premiere of its new leader, Alfonso Rueda, while Ana Pontón's BNG feels, no matter how difficult it may be, before the historic opportunity to get to preside over the Xunta after the next elections, scheduled for 2024, and the PSdeG, as always, is waiting for favorable winds to blow from Madrid again.