Alberto Núñez Feijóo fulfilled the first objective of his leadership yesterday, by declaring the internal crisis of the PP closed after having closed the last wound of the Pablo Casado stage, with the election of Isabel Díaz Ayuso as president of the PP of Madrid, who was the origin of the fall of the previous president of the PP. 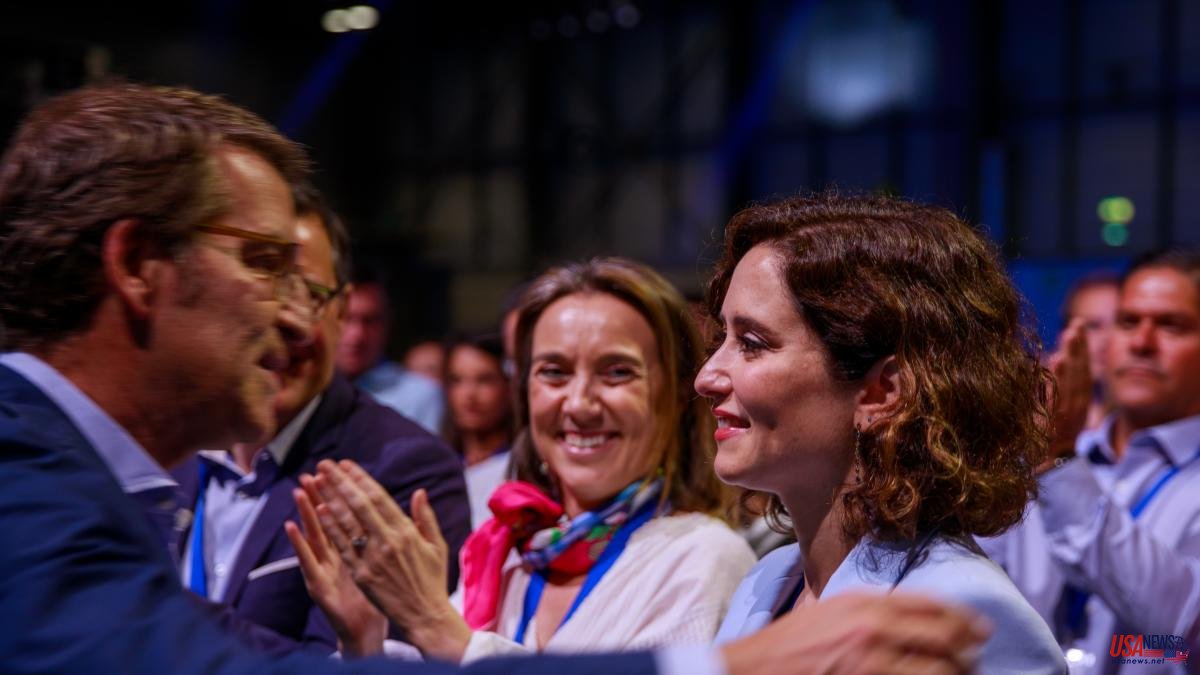 Alberto Núñez Feijóo fulfilled the first objective of his leadership yesterday, by declaring the internal crisis of the PP closed after having closed the last wound of the Pablo Casado stage, with the election of Isabel Díaz Ayuso as president of the PP of Madrid, who was the origin of the fall of the previous president of the PP. Casado's replacement was the first regional president who from the Xunta de Galicia gave his support to the aspirations of the Madrid president to lead the party, not just the Madrid government.

And it is the first thing he has accomplished since he is national president of the PP, to hold the PP congress in Madrid as soon as possible, delayed by the Casado leadership to show Díaz Ayuso who was in charge. Feijóo, at the closing of the congress, in which he landed with the main heavyweights of the new leadership of the PP: Cuca Gamarra, Elias Bendodo, Esteban González Pons, Miguel Tellado, agreed with Isabel Díaz Ayuso in her aspirations.

"This congress had been pending for too long," proclaimed the president of the PP, who stressed that the reasons why it was not held and the crisis experienced should already be forgotten: "Expanding on them is an exercise in nostalgia that leads nowhere We have worried too much about internal issues" and that should not occupy the new PP "not one more second", because he is "not interested in the past, but what is going to happen, because those who remain in the past, They lose the elections.

Feijóo had the detail, partly to solve his scheduling problems, to bring forward his intervention leaving the last turn to Ayuso. In exchange, and given that the Madrilenian is already president of the PP in Madrid, he gave her, as national president of the party, duties, and set the bar high, because he commissioned her to obtain an "absolute majority" in the elections that will be held within a year. . An assignment that the new president of the Madrid PP assumes, although she prefers to speak of "a large majority."

Gone are the speeches of Casado interpreted in opposition to Díaz Ayuso, and those of the president of the Community of Madrid, as attacks on the leadership of the PP leader. Feijóo and Ayuso were full of mutual praise, and the president of the PP gave him his place, as did the mayor of Madrid, José Luis Martínez Almeida, since he made himself available to him since in a few days he will already be registered in the capital of Spain and therefore will militate in the PP of Madrid.

With the congress closed this Saturday, Feijóo considers that "a new brilliant stage" is opening, because there is in Madrid "a leader, a team and a project" to face a challenge, win the city council and the Community again. For Feijóo, from today the PP is more prepared for it, because there is a PP "the PP is more prepared, more open, that has captured new people, profiles, illusions, new desire".

A PP, Feijóo stressed, "more prepared to serve the people of Madrid", a PP "more united, firmer, more committed, a more solid party, and its freer team so that the Madrid PP is freer to serve Madrileños". And it is that if the people of Madrid believe "that we can offer answers to their problems, they will vote for us, but if we get involved in minor issues, they will not; if we are not useful to their interests, they will stop voting for us."

With the congress a step is taken in that victory, according to Feijóo, because for citizens to believe in a party it has to have "a leader who resembles the land he is going to serve, that leader whom others listen to , understand and follow" and is convinced that "Isabel is the president who most resembles Madrid and the people of Madrid".

Feijóo does not mind, as Casado did, that Isabel Díaz Ayuso makes speeches on Spanish politics, and has the Sánchez Government as the target of their criticism, and the defense of the Monarchy and Felipe VI, among their priorities, as He did it again in his closing speech at the congress. The national president of the PP does not care because he does not see Ayuso as a threat, which is what happened to Pablo Casado. For Feijóo everything adds up and he makes his speech and marks the match.

For Feijóo, the important thing is that they both say the same thing, even if they do so with different expressions, and while Díaz Ayuso speaks of the worst government in history, the president of the PP speaks of the same thing, with other words: "Today Spain suffers from the government less prepared, weaker and more divided", a government that "does not know how to deal with crises, which is not designed to solve the problems of a great country, but to argue on Twitter, post photos on instagram or generate debates on television talk shows", in addition to being a "weak government, because it does not have the capacity to decide" because Sánchez "is a prisoner and prey to its internal weakness" and its partners.

The last-minute change in the order of the interventions has hardly left Ayuso's team room to modify his speech minimally and not enough to reformulate it. There is no doubt that the current line-up between Sol and Génova is much larger than in Pablo Casado's time, but the difference in styles has once again become clear.

While Feijóo has harangued his people to focus on the party and be prepared for attacks from the left, but "without falling into his game getting involved in minor issues", the Madrid president has opted for a defense to attack. She has returned to acting as the central government's battering ram from the start of her speech accusing Pedro Sánchez of "directing Spain in an unfair manner."

It is an Executive, Ayuso insisted, "that does not know how to manage and that, the smaller it feels, the more it becomes brutalized; colonizing the institutions with personnel with the worst known qualifications, but with a great ideological load and sectarianism".

Without a continuity solution, the newly appointed president of the PP in Madrid has attacked "sanchism that looks for problems where there are none. It is a factory for expelling young people and companies, and this matters to us in Madrid," she insisted, defending her model as a "guarantee of prosperity".

Ayuso has taken advantage of this contrast of models to insist on the great objective of the Madrid PP for the coming months: the conquest of the southern municipalities traditionally led by the PSOE and that the regional government promises to get out of the disconnection. Something that he will do, he has promised, "executing new infrastructures and metro lines that will bring them closer to kilometer 0 of the capital."

With her words, the president of the Community has come to recognize the gap between the capital and the towns in the south. Ignoring the fact that the PP has been governing uninterruptedly in the Community for more than a quarter of a century. Although she has quickly resumed her attacks on the central Executive, which she predicted would have little time in Moncloa by putting the Madrid PP at the disposal of the "change led by Feijóo".