If Alberto Núñez Feijóo boasts of anything, it is having achieved peace in the PP in just eight months, after the divisions experienced within the party. 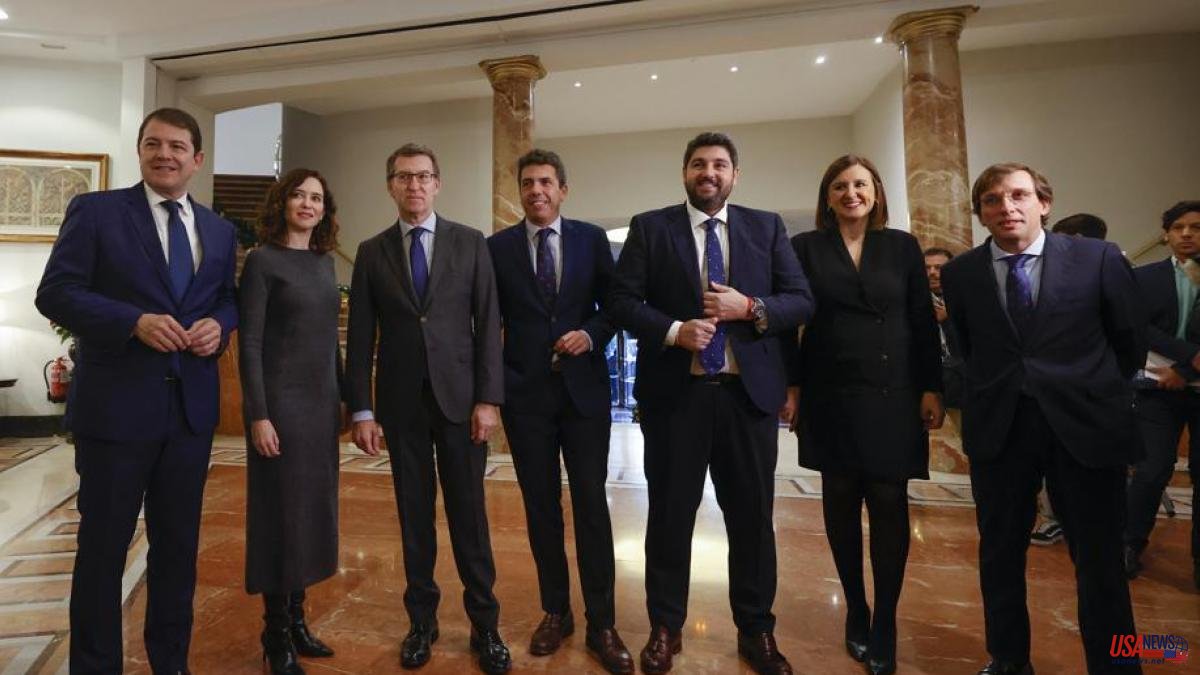 If Alberto Núñez Feijóo boasts of anything, it is having achieved peace in the PP in just eight months, after the divisions experienced within the party. This Monday, in the presentation of an informative breakfast with the candidate for the presidency of the Generalitat Valenciana, Carlos Mazón, he puffed out that unit, in the presence of several regional presidents of the PP: Alfonso Fernández Mañueco, Castilla y León ; Fernando López Miras, Murcia; Isabel Díaz Ayuso, (Madrid), or municipal officials such as the mayor of Madrid, José Luis Matínez Almeida, or the PP candidate for Valencia City Council, María José Catalá.

A unit that Feijóo contrasted with the photo of the meeting of the Socialist International this weekend in Madrid, "where socialist regional leaders have shunned their leader, avoiding photos with him. A situation that not only affects the PSOE, according to the president popular: "There are also parties with splits - in reference to Vox, whom he did not mention -, and divided parties - in reference to United We Can - in which alternative projects are launched."

The importance of this unit lies, according to Alberto Núñez Feijóo, in that "it proves that there is a political project that supposes a political alternative, a project of Spain", which is, he said, to what the PP and he, as its leader, is dedicated, which is important for Spaniards.

A project whose sole objective is to provide solutions to the problems of Spain, which in his opinion the parties that make up the Government and their allies do not provide. "They have been so determined to live in confrontation that they have ended up confronting the citizens", because "the confrontations always generate more serious confrontations".

As an example, the president of the PP cited the approval of the budgets, "which do not solve the problems of all Spaniards, only those of the Government and its partners", regardless of the president of the Government about the problems that have been generated with the agreements to the that it has arrived with ERC, in exchange for abolishing sedition, or with Bildu, leaving "Spanish democracy unprotected" to benefit "those who have attacked the State".

For Feijóo, Pedro Sánchez, "entangled in self-generated daily controversies, forgets the problems of ordinary people." And those problems, for the popular president, are economic, an issue that he does not intend to put aside, no matter how hard he tries to hide it with other information, Feijóo said. The inflation situation, the tax burden, the high indebtedness, are issues to which the president of the PP gives the greatest importance and to which he plans to dedicate himself on his way to La Moncloa.

Feijóo does not intend to resign himself to the fact that the high inflation, of which a new figure will be known tomorrow, is presented as a containment, because it falls a few tenth, when it is weighing down the lives of the Spaniards, who cannot make ends meet. For this reason, the president of the PP insists on his proposal to lower the VAT on basic foods, and to update the personal income tax rate, which is not done until 2008, the so-called deflation, for those who earn less than 40,000 euros.

And that, he stressed, despite the fact that the Government has already collected 28,000 million euros so far this year, due to the increase in inflation, and it will end the year with a higher-than-expected collection of 30,000 million euros. Money, he denounced, "that has not gone to alleviate the burden of the citizens and not to reduce the historical indebtedness."